Nobody seems to know the bridge just east of Lakeland has a name: Captain Henry Will Jones Bridge. Just below it is Lakeland Boat Ramp on the Alapaha River Water Trail (ARWT). We’ll be going by there in a few months on the Alapaha Quest.

Scott Thompson, Pieces of Our Past, November 30, 2015, CAPTAIN HENRY WILL JONES, 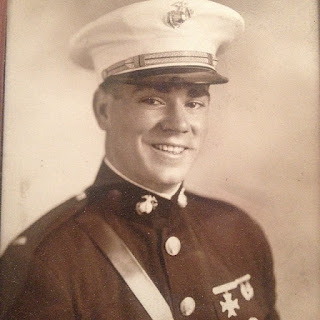 Henry Will Jones was born about 1917 in what became Lanier County just as our country was entering World War I. After graduation from Lanier High in 1934, Jones continued his education at Georgia Military College (1935), Abraham Baldwin College, and the University of Georgia, where he graduated in 1940. With his bachelor of science diploma in his hand, Jones accepted a position as the first vocational-agricultural teacher at Dexter High School on July 1, 1940.

The blog post continues with his biography, including he joined the Marines, and what he did in the Pacific.

In honor of his admirable valor, the Secretary of the Navy posthumously awarded the Silver State Medal to Jones’ family. March 24, 1997, the State of Georgia honored Captain Henry Will Jones with the naming of a bridge in his home county of Lanier. The resolution read:

WHEREAS, Captain Henry Will Jones of Lanier County was killed in action on October 18, 1944, while serving as a commanding officer of a United States Marine Corps company in the South Pacific during World War II; and he was awarded posthumously the Silver Star Medal by the Secretary of the Navy in recognition of his exemplary valor; and

WHEREAS, he had graduated from the University of Georgia and was an instructor in the Laurens County school system when he enlisted in the military following the Japanese attack on Pearl Harbor; and he completed officers candidate school, paratrooper training, and advanced military training with the Marine Corps and was recognized as a distinguished officer with considerable potential; and

WHEREAS, his fearless leadership, great personal valor, and unrelenting devotion to duty in the face of extreme danger contributed substantially to the success of his division in capturing a vital stronghold; and his courage and determination upheld the highest traditions of military service; and

WHEREAS, he enjoyed nature and had a strong attachment to the region in which he had spent his youth exploring the rivers, forests, and wildlife; and he often expressed his dream of returning to the Alapaha River in his letters home to his family; and

WHEREAS, it is most fitting and appropriate to honor this outstanding young officer who so gallantly gave his life for his country.

NOW, THEREFORE, BE IT RESOLVED BY THE GENERAL ASSEMBLY OF GEORGIA that the bridge on Georgia Highway 37 that crosses that portion of the Alapaha River in Lanier County be designated the Captain Henry Will Jones Bridge.

BE IT FURTHER RESOLVED that the Commissioner of Transportation is authorized and directed to place signs at appropriate locations along the highway designating the bridge over the Alapaha River as the Captain Henry Will Jones Bridge.