“Apparently, rural lives matter less than urban lives,” she wrote, giving reasons why county commissions such as in Suwannee County should represent their citizens, not pipeline companies from somewhere else. Lori McCraney speaking to the Suwannee Board of County Commissioners 17 November 2015.

She sent the whole thing directly, so here it is (I’ve added a few links), along with a link to where it’s published. Lori McCraney, Suwannee Democrat, 24 December 2015, Opinion: Suwannee County commissioners lack resolve against Sabal Trail,

The Suwannee County Commissioners held an emergency meeting earlier this month to finalize a strongly worded letter to the U.S. Army Corp of Engineers opposing the Sabal Trail natural gas pipeline. I am puzzled as to why its contents was, apparently, a surprise to several board members. The commissioners inexplicably reversed their stance and did not approve the letter. Who got to them in the 24 hours leading up to the meeting?

END_OF_DOCUMENT_TOKEN_TO_BE_REPLACED

Several Suwannee County Commissioners are studying the difficult and constantly-changing subject of energy, although the Chairman said he had already made up his mind,

Carl McKinney’s droll legend refers on his picture refers to Chris Mericle as “Jasper man”. The map shows sinkholes near the proposed pipeline path across the Suwannee River and the Falmouth Cathedral Cave System. at the Suwannee County Board of Commissioners meeting last night. They did nothing about a further resolution against Sabal Trail, although numerous citizens (many of them WWALS members) from Suwannee County and nearby counties helped discuss the situation.

Following the Suwannee County Commission’s decision last week not to formally oppose the Sabal Trail pipeline entering its jurisdiction, the public engaged commissioners in a debate over the future of energy.

Wow! They’re not kidding around. Suwannee County calls on the U.S. Army Corps of Engineers to keep the Sabal Trail invading pipeline out of Suwannee County and out of the state of Florida. Sabal Trail’s excuse was they didn’t know in advance, even though their attorneys sent a letter beforehand, and they didn’t show up in Albany, GA, either, with weeks of notice. Spectra Energy’s Andrea Grover told the newspaper some other things that also don’t match the public record.

Not one hand raised among the dozens in the room when a county commissioner asked who came to support the proposed Sabal Trail natural gas pipeline which would run through three states and dissect Suwannee County if approved.

Tuesday evening, every parking space at the county’s judicial annex building was full as O’Brien residents, people from Live Oak and activists and experts from as far as New Orleans gathered at the county commission meeting to voice their opposition to the project.

The commission was voting on END_OF_DOCUMENT_TOKEN_TO_BE_REPLACED

ACTION ALERT! SBOCC will be drafting a resolution concerning the Sabal Trail pipeline and compressor station at the next meeting. (facebook event)

Please attend and show your support for this very important initiative by our county officials. Your input would be greatly appreciated.

This item is not on the Suwannee BOCC agenda yet. However, we have reason to believe it will be discussed and probably voted on.

This is huge, because END_OF_DOCUMENT_TOKEN_TO_BE_REPLACED 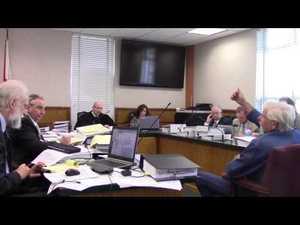 The Respondents rebuttal witnesses were END_OF_DOCUMENT_TOKEN_TO_BE_REPLACED