Quitman, Georgia also spilled sewage during Tropical Storm Irma, next to Okapilco Creek, which runs into the Withlacoochee River, then the Suwannee River. 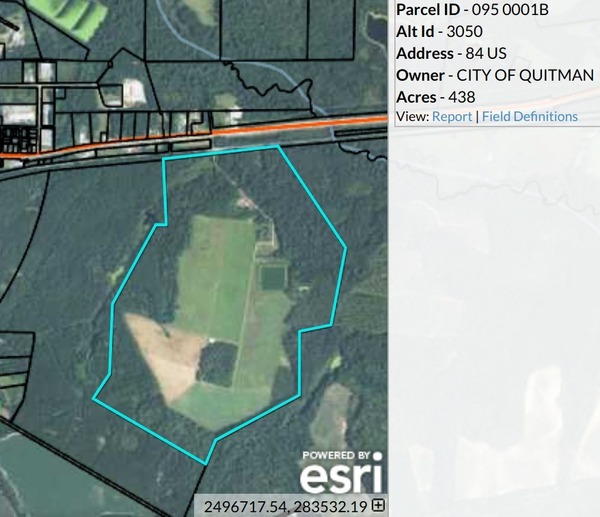 According to John Thursby with Quitman Utilities, the lift station at Quitman’s main wastewater treatment plant lost power, and its generator quit, causing its pond to run over for an hour or an hour and a half, due to rainwater. He says they process about 300,000 gallons a day. So the spill was somewhere between 20,000 and 70,000 gallons; he is recalculating it.

They are sampling now upstream and down, but haven’t gotten results back yet. He says it was probably not as much as a cow herd.

The various USGS, EPA, and GA-EPD maps, spreadsheets, and permits are vague about where this plant is located, but GreenCompanyDB.com locates QUITMAN (CITY OF) WPCP south of US 84 a bit west of Okapilco Creek, in what turns out to be Parcel ID – 095 0001B, 438 acres, owned by the City of Quitman.

GA-EPD, PR, 30 June 2017, Public Notice: Notice Of Application For A Wastewater Discharge Permit To Discharge Treated Wastewater Into The Waters Of The State Of Georgia No. 2017-13 ML,

So far no reports of sewage spills in the Alapaha River watershed.

However, Jay Howell says several small cities had issues with power to their drinking supplies during Irma:

The rest of the story

GA-EPD is divided into reports to its Albany office and its Atlanta office. I have a request in to the Atlanta office for all spills in September, which they say they will satisfy a few weeks into October. Most of the larger counties and cities report to Atlanta.

Meanwhile, Jay Howell of the GA-EPD Albany office says they got no reports of sewage spills in the Suwannee River Basin. He says most of our counties were on the western side of Irma, so did not get near the expected rainfall, so few spills.

On the east side of I-75 a couple of municipalities had some overflow issues, both in the Altamaha River Basin: Eastman in Dodge County, and McRae-Helena in Telfair County McRae-Helena, Telfair, Co. lost power and didn’t have enough generators GA-EPD contacted GA Rural Water, and some other sources and got them generators so they got power restored pretty quick.

So we’ll see what the Atlanta office says about the larger facilities in the Suwannee River Basin, as I keep calling about one a day.