A river is a natural watercourse, usually freshwater, flowing towards an ocean, a lake, a sea, or another river. In some rare cases a river could flow into the ground and dry up completely at the end of its course, without reaching another body of water.
—River, on Wikipedia

The sinks or siphons and springs are some of the most interesting features of the Alapaha River Water Trail.

Through cavernous openings in the limestone the Alapaha River departs the river bed into two sinks or siphons and travels underground approximately 10 miles to the Alapaha Rise on the Suwannee River. During low water levels all of the river is taken into these siphons leaving the river bed downstream a sandy path, good for hiking, with occasional pockets of water. During medium and high water levels the sinks cannot take the entire volume of the river allowing the excess water to flow to the Suwannee.

Florida’s Fabulous Canoe and Kayak Trail Guide calls the Alapaha River potentially the most dangerous river in Florida. It goes on to say about the siphons:

“Are they Dangerous? You bet. Do not approach them; pass them by. No long monstrous arm will reach out, but exceptionally careless adventurers could be in danger…”

I personally would not pass them by. You will never see anything like these geological wonders anywhere. A paddler can put-out on the west bank and hike along the bank to carefully view this awesome site. Or for a nice hiking experience you can drive to the Jennings Bluff Launch, from the parking area hike the trail that leads upstream along the river. It is about a 45 minute walk to the Dead River.

Directions to the Jennings Bluff Launch: From Jennings, Hamilton County, FL, travel south on US 41 to NW 25 Lane; turn left; travel east to NW 82 Court and the entrance into the Suwannee River Water Management District’s Jennings Bluff tract. Follow the drive about a mile to the parking area.

According to Alan Cressler, whose picture is used below with permission:

At low water levels, all the water in the Alapaha River sinks into a cave system. The cave is developed in the Oligocene age Suwannee Limestone. 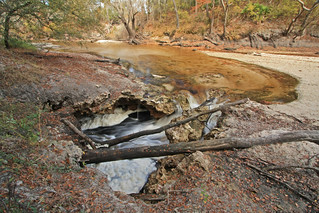 There is no dry passage. To the best of my knowledge, the water is not seen again until it reaches the Alapaha Rise Spring on the north side of the Suwannee River about twenty miles away. That spring is a large tannin spring.

From Madison, take U.S. 90 east 2-3 miles until the fork with State Road 6. Take SR6 east, across the Withlacoochie[sic] River, and proceed about 12 miles to County Road 751. Turn right and drive about four miles to Suwannee River. Take boat ramp at Hutch Gibson Park (on the NW side of the river), and canoe upriver about ¼ mile. A few hundred feet past the CR751 bridge, you will see water rushing out with great force on the left — it is the mouth of the spring run.

The Alapaha Sink and Rise are what Samuel Taylor Coleridge was describing in his famous poem, Kubla Khan:

Bartram was describing not merely the New World, but one of its most exotic regions, the subtropical forests, rivers, and savannas that were so unlike the tame English countryside

It’s not totally clear that Bartram ever actually crossed the Alapaha River, and the other candidate for the Alph is the Santa Fe River in Florida, another tributary of the Suwannee River. But Alph sure looks like Alapaha with a few letters missing…. 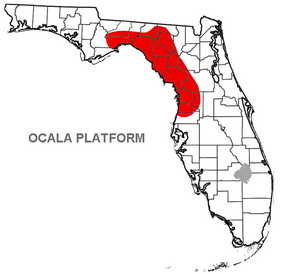 Here is a related passage from Bartram’s Travels, page 175:

BEHOLD now at still evening, the sun yet streaking the embroidered savannas, armies of fish pursuing their pilgrimage to the grand pellucid fountain, and when here arrived, all quiet and peaceable, encircle the little cerulean hemisphere, descend into the dark caverns of the earth; where probably they are separated from each other, by innumerable paths, or secret rocky avenues; and after encountering various obstacles, and beholding new and unthought of scenes of pleasure and disgust, after many days absence from the surface of the world, emerge again from the dreary vaults, and appear exulting in gladness, and sporting in the transparent waters of some far distant lake.