Most committees meet as needed, and include members who are not on the board. All committees report to the board, usually through the Executive Director. See Committee System.

There are openings on the board right now, and always on the some of the committees. If you want to apply, please fill out the application form.

The committees are, in alphabetical order:

Consists of the officers, chaired by the President. Makes decisions between board meetings, and to make other decisions as needed, including to appoint members to committees. Meets approximately monthly, usually by teleconference.

The WWALS Board at its April 14, 2019, Quarterly Board Meeting appointed a Nominating Committee, consisting of John S. Quarterman (Chair), Shirley Kokidko, Bret Wagenhorst, and Dan Phllips, to nominate a slate of board members for the open positions for the July 14, 2019 Annual Member Meeting, and for the immediately following Quarterly Board Meeting to nominate a slate of officers.

The WWALS Board at its Quarterly Board Meeting 12 July 2020, via zoom, appointed a standing Nominating Committee to recommend board members, officers, etc., consisting of the following current WWALS board members: Tom H. Johnson Jr., Chair, John S. Quarterman, and Laura D’Alisera.

The WWALS Board at its Special Called Meeting 31 October 2021 reconstituted the Nominating Committee with Chair Sara Jay and other members John S. Quarterman and Laura D’Alisera.

The mission of the WWALS membership committee is to manage membership records with the goal of building and retaining a strong diversified membership.

This includes maintaining the membership database (spreadsheet), any on-line mailing lists, and communications with the membership.

You can help WWALS conserve our watersheds by joining today!

Mission: Think ahead about finances.

The mission of the outings committee is to plan and organize paddles, hikes, clean-ups and other outdoor activities to encourage use of public waterways and lands, which will promote enjoyment, stewardship, awareness and conservation of the waters and lands within the WWALS watersheds.

See the WWALS Outings Checklist. Below is a summary of some major items from that checklist. 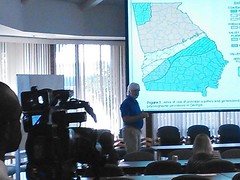 See the Outings and Events page.

Seminars and other mostly indoor meetings, such as the WWALS Watershed Conference, Tifton, GA, 24 August 2013, about the single largest assets you’ll ever own, and the February 2016 Withlacoochee and Little River Water Trail Workshop.

Promotes public awareness and participation in the mission of WWALS through traditional public relations and social media.

See also the web pages for the Water Trails themselves.

All Public Landings and Boat Ramps in the Suwannee River Basin

To implement an Alapaha River Water Trail, including the Georgia River Network grant for that purpose.

To (re-)establish a Withlacoochee River Water Trail, including the Little River. See the WRWT web page, especially the draft map and spreadsheet, which already contains entries for every access point from every known guidebook. Lots of work left to do, in miles, pictures, points of interest, events, and other things you will think of!

Obviously this Watershed Issues Committee could use some new volunteers, perhaps to split out some of these topics into new committees.

Suzy Hall, Chair (2020-01-11). This committee is for organizing the actual testing for a water quality monitoring program, according to scientific criteria established by the Science Committee, aided by the other committees.

Chosen by three judges from a record number of Finalists from Atlanta to Palatka, WWALS Watershed Coalition, Inc. (WWALS) is pleased to announce the winners of the Fourth Annual Suwannee Riverkeeper Songwriting Contest, August 21, 2021.

The Third Annual Suwannee Riverkeeper Songwriting Contest was the best-attended yet, outside in the Turner Center Art Park, despite a virus pandemic, using zoom to bring one contestant online from far away. Here are the winners.

The WWALS Board at its October 20, 2019 Quarterly Board Meeting reconstituted this committee for Songwriting 2020, with Committee Chair Tom H. Johnson Jr., and members Eileen Box, John S. Quarterman, Scotti Jay, Sara Jones, Mary Carolyn Pindar, Laura D’Alisera, “with at least two additional members to be secured, from Florida, if possible”.

The Second Annual Suwannee Riverkeeper Songwriting Contest was an even bigger success. Here are the winners.

The First Annual Suwannee Riverkeeper Songwriting contest was a success! Here are the winners.