Floridans worried about springs drying up: it already happened to this one. A sad channel with no flow in Saunders Park once was a large and famous spring-fed pool, remembered by many in Valdosta, Georgia, both those who went there and those who were refused. 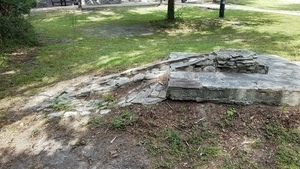 The man who built Barber Pool at that spring on River Street, E.R. Barber, was the first Coca-Cola bottler outside of Atlanta, an inventor, and also the builder of the current home of the Valdosta-Lowndes County Chamber of Commerce. The Barber-Pittman House is on the National Register of Historic Places. That big house on the main drag, Ashley Street, just north of downtown Valdosta, was willed to the citizens of Valdoosta by his daughter, Ola Barber-PIttman.

Here’s what Barber Pool looked like in its heyday. 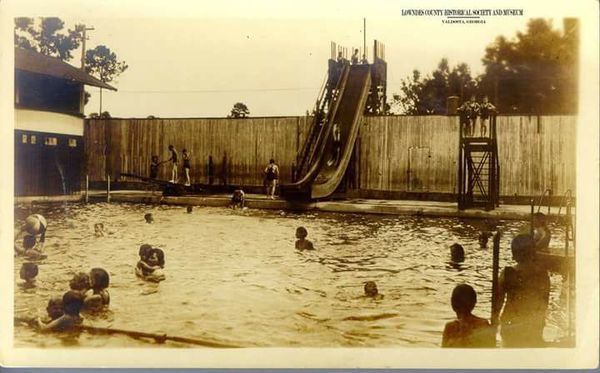 Thanks to Sherry Owens for these pictures. She posted them in answer to my query in the facebook group “If you grew up in valdosta ga you remember when…,”. 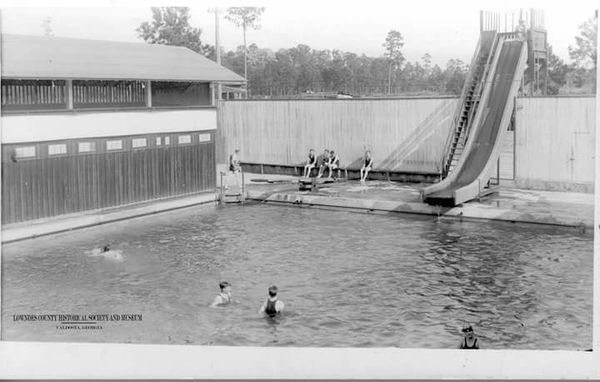 Sherry Owens said she got the pictures from the same facebook group when somebody else posted them earlier. 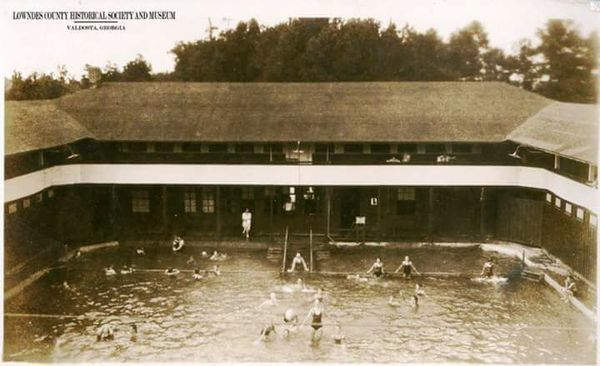 Each picture is stamped Lowndes County Historical Society and Museum, and I thank the Museum for keeping these pictures.

Why is it called Saunders Park when it used to be Barber Park and before that Barber Pool? Because black people were not permitted to swim in that pool, and decades later various people objected to the name of the park.

VALDOSTA — The decision to rename Barber Park has hovered around Valdosta City Councilmen for nearly two years. Tonight, Councilman Joseph “Sonny” Vickers will try to put to rest an issue that has caused an uprising in the community since it was introduced in 2005. Vickers plans to introduce tonight a motion to rename Barber Park in memory of John W. Saunders, the first African-American county extension agent appointed in Lowndes County and founder of the Valdosta-Lowndes County Ham and Egg Show.

The story goes into quite a bit of detail on the issue. In it, Sonny Vickers, who could not swim in that pool because he is black, and who is still on the Valdosta City Council, says he thought Mr. Barber was a product of his times. The story confuses Ola the daughter with E.R. the father, but other than that seems to be fairly accurate. I am not expressing any opinion on that old issue, since I didn’t know the Barbers, other than that John W. Saunders is a find namesake for the park, and Lowndes County continues to have one of only two (or maybe now the only) Ham and Eggs Shows in the entire U.S.

Meanwhile, here’s the Barber-Pittman House as the current home of the Chamber:

Why did the spring dry up? As recently as a few years ago, people remember at least a trickle coming out of it, but nothing like enough to feed a pool of that size.

Everybody knows the answer: overpumping. Drinking wells, agriculture, and industry in Valdosta, Lowndes County, and as far away as Jacksonville and Savannah, deplete the groundwater, all the way down to the Floridan Aquifer. It doesn’t have to be this way.

What You can Do

You can help stop these sinking water levels.