My vegetable buyer from St. Mary’s, GA, said “I heard you on the radio this morning.” Notice the map Georgia Public Broadcasting posted says “Phase I” in U.S Army Corps of Engineers Application SAS-2018-00554. The company actually owns land northwards all the way up next to the swamp. 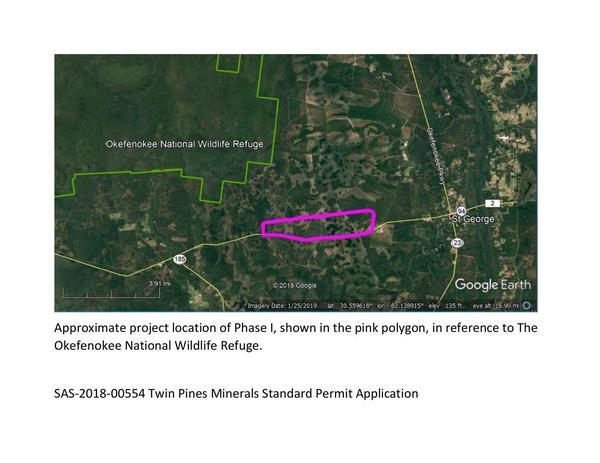 An Alabama company wants to mine for heavy minerals near the Okefenokee National Wildlife Refuge in southeast Georgia.

The proposal from Twin Pines Minerals called for mining on more than 2,414 acres of land in Charlton County. The land is home to gopher tortoises and frogs, which are endangered, but Twin Pines said it’ll move them.

The application from the company said about 522 acres of wetland could be temporarily impacted as the company would have to dig and excavate for draglines. Officials have said they would put dirt back and replant if their proposal gets approved.

Another 65 acres could be permanently destroyed as new structures would be built on the wetlands.

But Suwannee Riverkeeper John Quarterman said the actual impact could be greater.

“The most obvious thing that we really need is a real environmental impact statement,” Quarterman said. “All we have so far is, ‘this is what the applicant said.'”

Quarterman was concerned about runoff from the mining, wildlife habitats, and the effects on waterflow underground.

The Army Corps of Engineers is taking public comment on the proposal until until August 13.

For more background, see Titanium mine near Okefenokee NWR 2019-07-12.

Public Hearing: Any person may request, in writing, within the comment period specified in this notice, that a public hearing be held to consider this application for a Department of the Army permit. Requests for public hearings shall state, with particularity, the reasons for requesting a public hearing. The decision whether to hold a public hearing is at the discretion of the District Engineer, or his designated appointee, based on the need for additional substantial information necessary in evaluating the proposed project. Comment Period: Anyone wishing to comment on this application for a Department of the Army permit should submit comments in writing to the Commander, U.S. Army Corps of Engineers, Savannah District, Attention: Ms. Holly Ross, 1104 North Westover Boulevard, Suite 9, Albany, Georgia, 31707, or by email to holly.a.ross@usace.army.mil, no later than 30 days from the date of this notice. Please refer to the applicant’s name and the application number in your comments.

If you have any further questions concerning this matter, please contact Ms. Holly Ross, Project Manager, Albany Field Office at 648-422-2727 or via email at holly.a.ross@usace.army.mil.

You can go ahead and send in some comments, maybe asking for a real Environmental Impact Statement, and maybe call for a public hearing. For that matter, how about a deadline extension until we can actually see the entire application, not just the truncated excerpt the Corps posted with the Notice?