Received via email a few minutes ago, confirming what our WWALS agents saw earlier today:

On February 10, 2020, The City of Valdosta Utilities Department staff responded to a call concerning a manhole discharge at the 2400 block of Patterson Street. 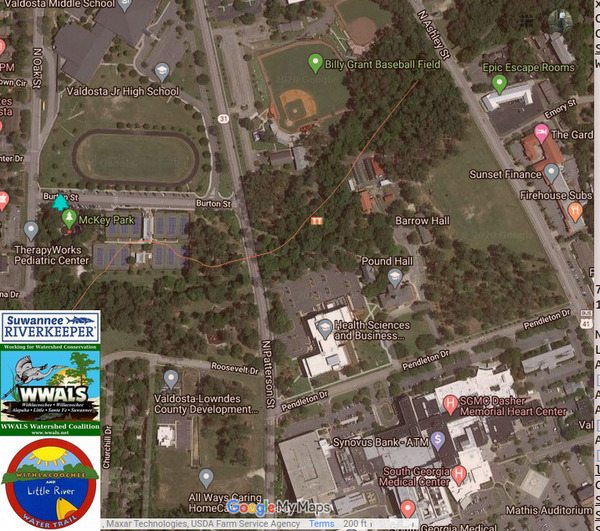 The cause of the spill was determined to be a grease blockage resulting in approximately 200 gallons of sewage to enter a storm drain that discharges into Two Mile Branch. The blockage was caused by a buildup of fats, oils, and grease that accumulated inside the sewer line.

City staff were able to capture and recover a large portion of the discharge before it entered state waters. The blockage was cleared and the site and its discharge point were cleaned and disinfected.

Although the level of potential contamination to the area is minimal, the public is advised to avoid contact with the water adjacent to 2400 block of North Patterson Street for the next seven days.

All appropriate regulatory and public health agencies have been notified, and warning signs have been posted at that location.

This spill has not yet shown up in GA-EPD’s Sewage Spills Report. That’s probably because GA-EPD updates that usually early in the day, so it probably will show up tomorrow. Tomorrow I’ll also ask Georgia Department of Health if Valdosta informed them. And the downstream Florida agencies and counties.

Most of the rest of the press release is a duplicate of Valdosta’s FOG web page.

Individuals with questions should contact Environmental Manager Scott Fowler at 229-259-3592 or by email at sfowler@valdostacity.com.

This press release does not (yet?) appear to be on Valdosta’s website.

Well, I was thinking of calling Scott Fowler after a WWALS member tipped me off around 10:30 AM. However, our scouts reported Valdosta was there by 2PM, apparently replacing a sewer line starting at Oak Street and crossing the wooded area south of the tennis courts to Patterson. So I thought I’d see if the city would announce it.

Congratulations, City of Valdosta, for ‘fessing up, and for quick response! Also for naming Twomile Branch in the report.

No points, however, for the vague location, “2400 block of Patterson Street.” You know exactly where the manhole is, and you could have provided latitude and longitude.

Also, where did this grease come from? Hm, the only thing nearby uphill on Twomile Branch is VSU North Campus. But that doesn’t say where the sewer line runs. I could look in VALORGIS and try to decipher that, but Valdosta could also just say.

Hm, “and warning signs have been posted at that location.” Well, our scout will attempt to get a picture of those signs.

Anyway, better than usual response and announcement, Valdosta. Still room for improvement, though.

And we’re all still waiting for reimbursement for those who spent money testing wells and rivers downstream after Valdosta’s December 2019 record-largest raw sewage spill, plus ongoing testing and marketing to help lift the stigma, the chronic reputational damage Valdosta’s decades of spills have done to our waterways.

Suzy Hall with a Petrifilm.
Each bacterial test costs $6 for Petrifilms alone.
WWALS is spending about $40 a day on Petrifilms after this Valdosta spill.