Apparently cow pastures and the Suwannee and Santa Fe Rivers are no concern of Florida Audubon, nor even the other Withlacoochee (south) River that runs out of the Green Swamp, not to mention WWALS’ Withlacoochee (north) River in Georgia. 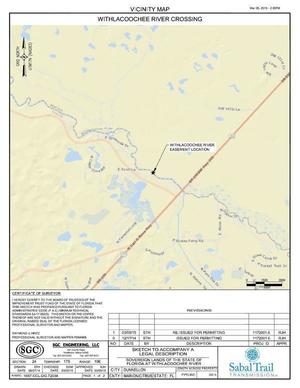 Charles Lee, Audubon Florida’s director of advocacy, said that the group has worked with Sabal Trail on route modification and environmental mitigation measures for portions of its 515-mile pipeline in Florida.

Lee said Audubon Florida negotiated with Sabal Trail for 18 months, resulting in more than 20 changes in the pipeline’s route. The most significant was re-routing the route around the Halpata Tastanaki Preserve in Marion County, one of the best Florida Scrub-Jay habitats, rather than cutting through the middle of it.

“It is our conclusion that Sabal Trail has now selected a pipeline route and mitigation measures that avoid important habitats and minimize impacts to sensitive wetland areas in Florida,” Lee stated in a letter to Kimberly Bose, Secretary, Federal Energy Regulatory Commission.

Lee said, “There were occasions where simply moving the route 200 feet in one direction or another could take it away from significant wetlands and put it in a cow pasture.”

What do you think about that, owners of cow pastures? (I’m a farmer myself.)

However, in several locations there was no alternative except to go through deep wetlands, Lee said.

Sure there’s an alternative: cancel the pipeline and build solar farms.

Sabal Trail has also reduced overall impacts to the Green Swamp Area of Critical Concern, Lee said. About 1,200 acres of the swamp in Polk County that would have been vulnerable to development will now be conserved and restored under the Florida Forever Program, Lee said.

Hundreds of residents along the proposed route oppose the project, asserting that rivers such as the Suwannee River as well as springs and the region’s water supply will be adversely impacted by its construction and operation.

Wetlands will be filled resulting in reduced fish and wildlife habitat, WWALs Watershed Coalition Inc. stated in a petition filed with the Florida Department of Environmental Protection.

And WWALS continues with that legal process, heading for a hearing in Jasper, Florida, 19-22 October 2015. You can help WWALS in this legal case by contributing to our IndieGoGo crowdfunding campaign.

And you can still ecomment to FERC, ask the Army Corps of Engineers for a hearing, and oppose the pipeline in other ways.