Florida does it. Alabama does it. Maybe Georgia should do it: post pollution notices online as they are received, and send out email notices to those who have signed up. That way cities and counties would not have to notify anybody but the Georgia Environmental Protection Division (GA-EPD), and Riverkeepers wouldn’t have to poll each and every city and county to find out what is going on. 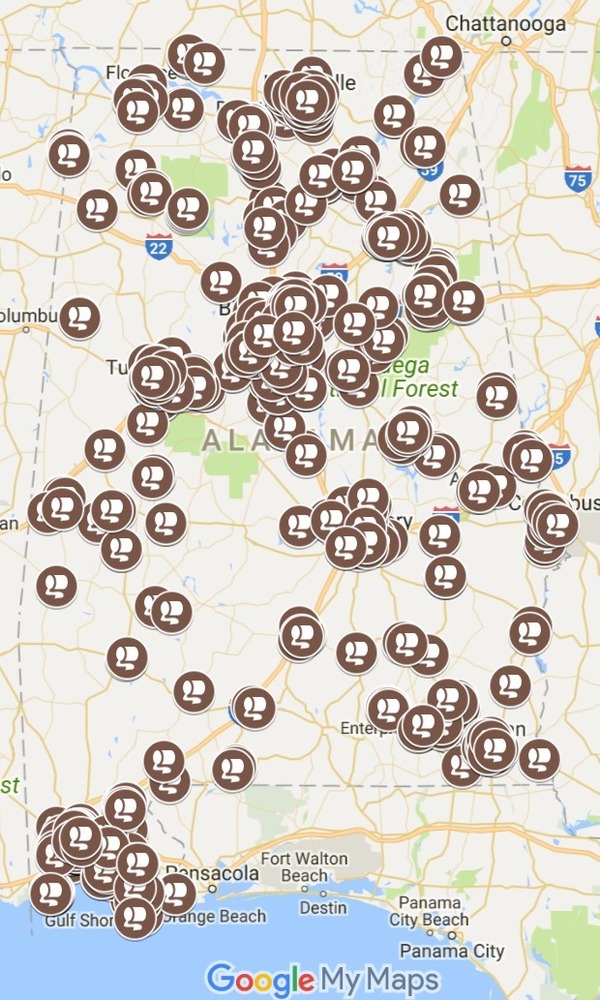 See below for the interactive map of sewage spills in Alabama in 2016 by Alabama Riverkeepers, and see also the Florida map I drew from Florida’s Pollution Notices.

Alabama also requires reporters to include latitude and longitude in their reports, and to use an electronic reporting system. Both are great improvements on Georgia’s current methods of telephoning in a number and responding to open records requests with records that do not have GPS coordinates.

The Alabama Department of Environmental Management has launched a new sewage spill notification system that allows users to sign up for email alerts when a sanitary sewer overflow is reported in their county.

According to ADEM, when a sewage treatment facility detects a spill, the facility is required to report it to ADEM within 24 hours. Once that electronic report is submitted, an email alert will be sent out within 15 minutes to anyone who has opted in to their notification system.

Alabama experienced “at least” 1,271 sewage spills in 2016 and environmental groups have argued that a better public notification system is needed to let people know if they might be swimming or boating in waters tainted by sewer overflows.

Earlier this year, a coalition of groups led by the Alabama Rivers Alliance, Black Warrior Riverkeeper, Coosa Riverkeeper and others petitioned the Alabama Environmental Management Commission to initiate the rulemaking process to require better public notifications in the event of an overflow.

The petition referred to a 2016 incident in which hundreds of thousands of gallons of untreated sewage spilled into the Black Warrior River during the July 4th holiday weekend, with the only public notifications being posted to the city of Northport’s Facebook page.

Hm, that incident sounds a lot like when Valdosta spilled 2.2 million gallons of sewage from its new Withlacoochee Wastewater Treatment Plant (WWTP) in January 2017, knew about it on a Sunday, didn’t tell the public until Tuesday, did tell SRWMD Monday, and everybody had already heard about it from SRWMD’s facebook page. After which SRWMD said FDEP confirmed river contamination possibly from Valdosta sewage. Yes, Valdosta is making some effort to be more transparent. WWALS just met with new Valdosta Utilities Director Darryl Muse yesterday. More on that in a bit.

ADEM rejected the Alabama Riverkeepers’ petition, but went ahead and implemented changes anyway.

Beginning on July 1, all new or reissued permits for wastewater treatment systems will require the utilities to implement an electronic overflow reporting system that includes latitude and longitude coordinates for the overflows….

In Georgia, Lowndes County phones in spill reports while Valdosta sends them to GA-EPD by email. There is no standardized reporting system. Some reports go to GA-EPD’s Albany office, which will read them back over the telephone. Others go to GA-EPD’s Atlanta office, which will return a month’s worth of data in a spreadsheet (yay!) but only several weeks into the new month (not very useful for downstream notification).

“As we enter Labor Day Weekend and Tropical Storm Harvey reaches Alabama this week, we’re glad to have these useful tools for citizens to protect themselves while they’re out enjoying their lake or river,” Frank Chitwood, Coosa Riverkeeper, said. “We look forward to more progress in the public notification system and we are grateful to our many supporters who signed the petitions for improved public notification.”

It was Frank Chitwood who organized this map of 2016 spills in Alabama:

Alabama has also rolled out stricter spill requirements. That could help with a problem I hear about all over Florida: Florida only requires reporting sewage spills bigger than an arbitrary limit, which I think is 1,000 gallons. Spill amounts are all estimates anyway, so if the utility estimates slightly less than that, no report needed. Also I hear Florida doesn’t count spills that have been vacuumed up.

Alabama looks like it’s fixing those mistakes. Georgia can avoid making them.

Visitors will be directed to a screen where they can choose from a number of notification options including sanitary sewer overflow reports, and select the counties for which they wish to be notified.

Wouldn’t that be great for Georgia?

If ADEM also puts all the spills in a table online, with ability to extract the data as an Excel file, like Florida does, I haven’t been able to find it.

Florida’s Pollution Notice Excel download enabled me to draw this map, which I have just updated to today, 20 October 2017:

Maybe soon it will be possible to draw a map like that for Georgia. And to get email notices of spills.