Many thanks to the Hahira Mayor and Council for passing a resolution in support of the water trail for the rivers that run less than six miles west (the Little River) and east (the Withlacoochee River) of the Hahira Courthouse where they met. 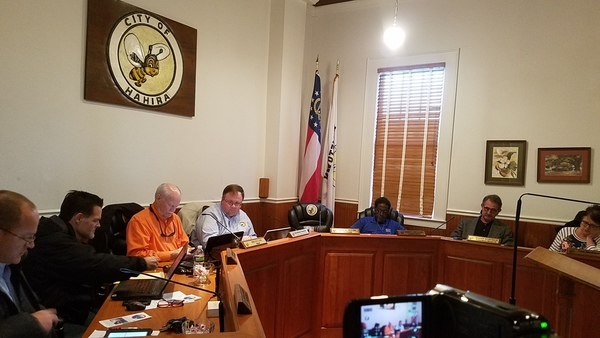 I spoke briefly at their Work Session, Tuesday, January 30, 2018, outlining the Withlacoochee and Little River Water Trail (WLRWT) and the resolution, and I invited them to upcoming WWALS outings. Several of the Council had positive comments.

Council Patrick Warren also mentioned his fear of snakes. I told the story of my English cousin and the alligators. Some people fear snakes, other fear alligators, and even more fear spiders, but actually the rivers are pretty safe.

Council Mason Barfield had asked for a previous agenda item how much it would cost the city. As I did for the other resolution, I pointed out that this one would cost the city nothing and commit it to nothing beyond saying it likes the water trail. There was some further discussion, after which they put the resolution on their Consent Agenda.

At their Regular Session Thursday, February 2, 2018, it passed along with the rest of the Consent Agenda.

Thanks to City Manager Jonathan Sumner and City Clerk Lisa Mashburn for facilitating this process. Y’all come paddle with us!

Text of the Resolution

See also PDF. We will post a signed copy when we get it.

A RESOLUTION TO SUPPORT
THE WITHLACOOCHEE AND LITTLE RIVER WATER TRAIL
FOR THE CITY OF HAHIRA, GA

WHEREAS, the Little River and the Withlacoochee River run less than six miles west and six miles east of Hahira, Georgia, with convenient boating and fishing access at Folsom Bridge and Hagan Bridge, both on Georgia Highway 122; and

WHEREAS, the Little River and the Withlacoochee River are described in various guidebooks as “Intimate, shaded in its northern reaches) mysterious in its beauty”, with abundant wildlife, limestone shoals, and sandbars; and

WHEREAS, the citizens of Hahira value the natural resources and outdoor recreation opportunities afforded by the Little and Withlacoochee Rivers and their watersheds such as fishing, swimming, boating, and birding; and

WHEREAS, the citizens value the Withlacoochee and Little Rivers for water quality and habitat protection; and

WHEREAS, the citizens of the City will greatly benefit from the recreational and natural experiences provided by a water trail or blueway; and

WHEREAS, the Little and Withlacoochee River watersheds also include creeks such as Franks Creek, as well as lakes, ponds, swamps, sinks, and wetlands, that can be included in maps, brochures, and guides for the Withlacoochee and Little River Water Trail; and

WHEREAS, existing hiking and biking trails can be linked to the Water Trail to encourage more multi-purpose participation; and

WHEREAS, this water trail is consistent with the comprehensive land use plan of Hahira and Lowndes County regarding:

WHEREAS, WWALS holds frequent outings on the rivers, and every outing is a cleanup; and

WHEREAS, the economy of the City will benefit from visitors to the Water Trail, and a Water Trail is a feature of quality of life that is attractive to businesses and employees and so may contribute to the economic development of the county; and

WHEREAS, the citizens of Hahira and visitors from throughout the State of Georgia and the United States have for more than twenty (20) years regularly and openly enjoyed and exercised a right of passage by boat on the Little and Withlacoochee Rivers as they travel past Hahira, thereby establishing a public easement of passage on the river; and

WHEREAS, the citizens of Tift, Colquitt, Brooks, Cook, Berrien, and Lowndes Counties, Georgia, as well as Madison and Hamilton Counties, Florida, all share in this valuable resource and most have provided for access to one or both of the Withlacoochee or Little Rivers and to other streams or waterbodies in its watershed; and

WHEREAS, the citizens of Hahira have indicated their support for the water trail at Hahira City Council meetings; and

WHEREAS, the City has repeatedly supported parks and recreation with funding;

NOW, THEREFORE, BE IT RESOLVED by the City Council of Hahira, Georgia;

Section 1: The concept of the Withlacoochee and Little River Water Trail as outlined by the website http://www.wwals.net/maps/withlacoochee-river-water-trail/ is approved and hereby incorporated by reference; and

Section 2: That the public easement of passage established by more than twenty (20) years of regular and open travel by boat on the Little and Withlacoochee River past Hahira is hereby recognized and accepted by the Council on behalf of the citizens of Hahira, and visitors from throughout the State of Georgia and the United States; and

Section 3: That this Resolution shall take effect immediately upon its adoption; and

Section 4: That we hereby direct each department in the City to work individually, together, and with other governments and organizations to support and implement the water trail.

PASSED AND ADOPTED BY CITY COUNCIL OF HAHIRA, GEORGIA, this _1st_day of _February,_ 2018.