Flying over the affected area appears to have made at least one elected official think harder about whether the supposed titanium mining jobs could be more important than the effects on the Okefenokee National Wildlife Refuge, both its economic importance and the potential environmental detriments to the swamp, to the Suwannee and St. Mary’s Rivers, and to the Floridan Aquifer. You can still write to the U.S. Army Corps of Engineers asking for denial or at least an Environmental Impact Statement.

Gordon Jackson, The Brunswick News, 28 August 2019, Getting the aerial perspective on a titanium mining project, 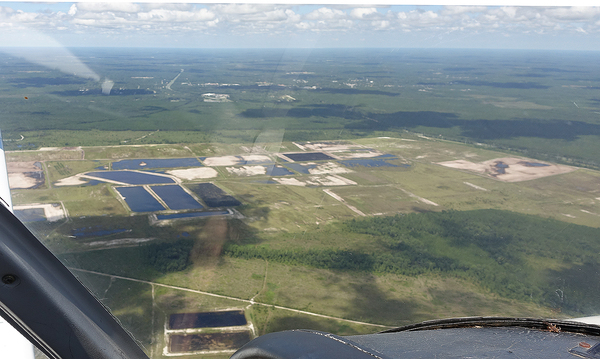 Photo: Jim Tatum, of the Chemours North Maxville Mine, Baker County, Florida. This is the mine pictured in the Brunswick News article.

…The mining company Twin Pines Minerals, LLC [(TPM)], said it plans to employ 150 people, but [Georgia State Representative John] Corbett acknowledged most of the employees will not come from Charlton County.

Corbett went on a two-hour flight Saturday to get an aerial perspective of the area where the proposed mining project will take place and also to look at a titanium dioxide mining project near Starke, Fla., to see the potential impacts if Twin Pines gets permission to start mining operations for at least the next eight years.

He was accompanied by Rena Peck Stricker, executive director of the Georgia River Network, and Ashley Beasley, a biological scientist for the Florida Fish and Wildlife Conservation Commission.

Stricker said she is not opposed to mining, but the risks are too great for the Twin Pines project.

“Titanium is a common mineral, but the Okefenokee is an uncommon swamp,” Stricker said. “It’s a national icon.”

“How is the wilderness experience going to be with all the lights and noise?” she asked.

Another concern is mining could lower water levels in the swamp, drying out highly flammable peat that would increase the risk of damaging wildfires spreading to commercial timberland. An estimated 7,000 feet of creek will be removed as a result of the mining process, Stricker said.

“If it dries up and catches on fire, it will hurt the timber industry,” she said. “In addition to directly impacting more than 500 acres of wetlands, the mine threatens to permanently change the hydrology of the refuge and pollute key habitats for many species. The U.S. Fish and Wildlife Service is on record stating that impacts from the mine may not be able to be reversed.”

Lower water levels could also impact the ability of paddlers to reach overnight camping platforms in the swamp.

Beasley said mining could impact a wildlife corridor established between the Okefenokee and Osceola National Forest in North Florida.

“The surrounding areas are also utilized by wildlife,” she said. “It’s part of the heartbeat of Florida.”

Unlike DuPont, the company that abandoned similar plans to mine titanium near the swamp two decades ago, Stricker questioned if the Twin Pines has the bonding and financial resources to pay for the costs of an environmental cleanup.

During the flight, passengers in the Piper Cherokee 6 flew over the titanium mines north of Starke, Fla., to view the impacts. The area showed mining in different stages as large pits are dug, the heavy minerals are extracted and the pits are backfilled.

Indeed, north of Starke, not as far south as Starke, because that would have taken too long to do two flights in a morning. That mine pictured in the newspaper article and above is the Chemours North Maxville Mine in Baker County, Florida. On the map below, it’s the fourth mine from the bottom, with the TPM proposed site in the middle, and towards the top the Southern Ionics (now Chemours) Mission Mine South in Charlton County, Georgia. The plane also flew over those last two sites. 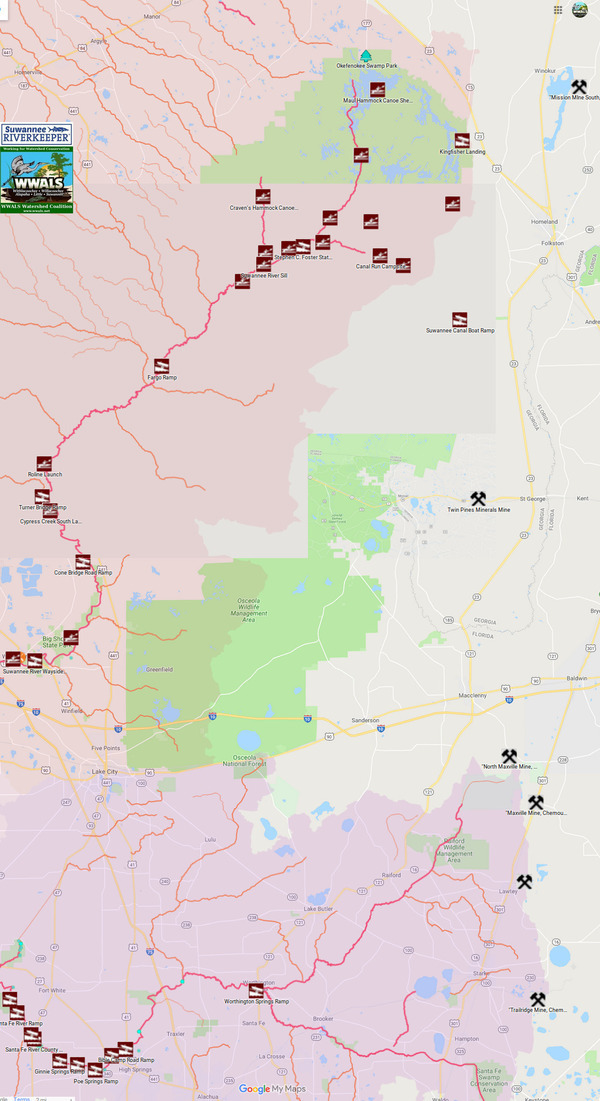 The four southernmost mines on that map are all under a Consent Order by the Florida Department of Environmental Protection, and both Chemours and TPM are named.

Back to the news story:

Some opponents are calling for an environmental impact study to determine if the swamp’s hydrology could be affected by mining.

You, too, can call for an EIS, by commenting to the U.S. Army Corps of Engineers.

“I’m concerned natural drainage flows could be impacted,” she said. “We need a hydrological study.”

Any damage to the swamp could put 753 full and part-time jobs dependent on the swamp at risk, outweighing the 150 jobs Twin Pines said it will provide.

“Georgia River Network is not anti-mining, but it is against mines that threaten Georgia’s rivers and waters,” Stricker said. “This mine represents such a threat. Just like proposed mines in Alaska’s Bristol Bay or in Minnesota’s Boundary Waters, some areas are too special to be put at risk by short-term profiteers. The Okefenokee is such a place.”

After the flight, Corbett said it was educational.

“It’s a different perspective seeing it from the air,” he said. “There are still a lot of questions.”

Thanks to Rena Peck Stricker, Executive Director of Georgia River Network (GRN), for inviting reporter Gordon Jackson on the 8AM flight. I invited Rep. John Corbett. I also invited Jim Tatum of Our Santa Fe River (OSFR), who took many more pictures on the 10 AM flight; see wwals.net/pictures/2019-08-24–jim-tatum-southwings-okefenokee-tpm.

That flight took off from Waycross-Ware County Airport, because the online AirNav listing for 3J6 Davis Field Airport at Folkston, GA still says there are trees obstructing the end of the runway. At yesterday’s first Work Session for the periodic revisions to the Charlton County Comprehensive Plan, Charlton County Administrator Hampton Raulerson said he had supervised trimming those trees to regulation height, so that shouldn’t be an impediment for further flights.

The nominal comment deadline was Thursday, September 12, 2019, but the Corps will not say it will not read comments sent in later, so you can still send in your comments, and post them on social media, as op-eds, etc.