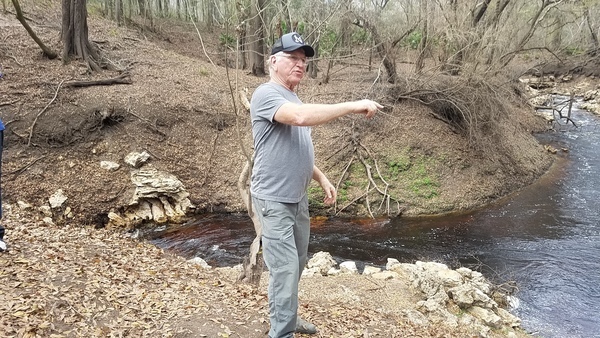 Received 11:23 AM this morning via email: 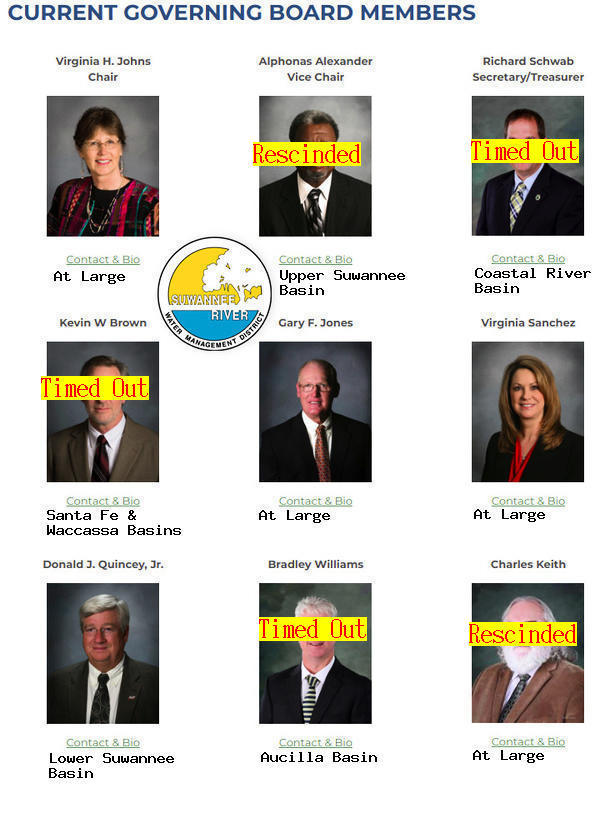 Rescinded and Timed Out

A Suwannee River Water Management District Governing Board meeting is scheduled for Tuesday. Among the agenda items is the first public hearing on the 2019-20 budget, but a full board is not seated currently.

Five of the nine members of the Suwannee River Water Management District Governing Board are gone, either booted off or not reappointed by Gov. Ron DeSantis, just as the district is starting the process of approving its new budget.

Gone from the governing board are Charles Keith and Alphonsas Alexander, who were reappointed last year by former Gov. Rick Scott, but were “rescinded” by DeSantis. Their terms were supposed to end in 2022.

Charles Keith was At Large and Alphonas Alexander was Upper Suwannee Basin. They were apparently rescinded some time ago, since their slots are listed as “Vacant” in the SRWMD Minutes for July 2019 (but not for May 2019).

Also gone are Kevin Brown, Richard Schwab and Bradley Williams, who also were appointed by Scott to terms that ended March 1, but were extended.

District spokeswoman Lindsey Garland said board members can remain an added 180 days past their term ending. That extra time has expired for the three, so they are no longer on the board.

All three were still listed in the SRWMD August minutes, so they apparently timed out since then. Hm, September would be 180 days. Kevin Brown was Santa Fe & Waccassa Basins, Richard Schwab was Coastal River Basins, an Bradley Williams was Aucilla Basin. These designations are according to the various SRWMD minutes.

For any governing board vacancy that occurs before the date scheduled for the office to be filled under this paragraph, the Governor shall appoint a person meeting residency requirements of subsection (2) for a term that will expire on the date scheduled for the term of that office to terminate under this subsection. In addition to the residency requirements for the governing boards as provided by subsection (2), the Governor shall consider appointing governing board members to represent an equitable cross-section of regional interests and technical expertise.

(2) Membership on governing boards shall be selected from candidates who have significant experience in one or more of the following areas, including, but not limited to: agriculture, the development industry, local government, government-owned or privately owned water utilities, law, civil engineering, environmental science, hydrology, accounting, or financial businesses. Notwithstanding the provisions of any other general or special law to the contrary, vacancies in the governing boards of the water management districts shall be filled according to the following residency requirements, representing areas designated by the United States Water Resources Council in United States Geological Survey, River Basin and Hydrological Unit Map of Florida—1975, Map Series No. 72:…

Dennis J. Price lives in the Alapaha River Basin, and he has experience in hydrology and local government, so he is qualified for the Upper Suwannee Basin Seat. We recommend him.

Don’t let any of this stop you from asking SRWMD not to let Nestlé withdraw more water from Ginnie Springs on the Santa Fe River, and maybe they should revisit Nestlé’s permit to withdraw at Madison Blue Spring on the Withlacoochee River.

The SRWMD board packet, also images page by page, is on the WWALS website.