She got a quote from the Mayor:

“We have the park out there where there’s a landing and parking areas and things like that, so it could be a tourist attraction, and people stopping in here to buy supplies and getting ready for their river trips,” said Valdosta Mayor John Gayle. “It could be a plus for us.”

He’s not in the WCTV video, but you may recognize the logo on this cap: 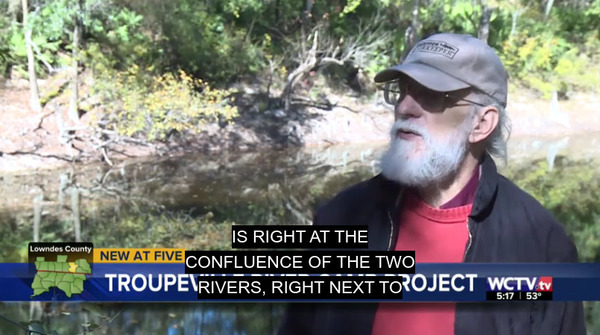 at the confluence of the two rivers

The Troupville River Camp project goes beyond what’s out there now; see this TV report:

VALDOSTA, Ga. (WCTV) — A new space for boaters to stop along the Withlacoochee River could land in Lowndes County.

This week, the Valdosta City Council will weigh signing a letter of support for the Troupeville River Camp. Located at what property owners call “The Land Between Two Rivers,” it makes up more than 70 acres at the confluence of the Little River and the Withlacoochee River. 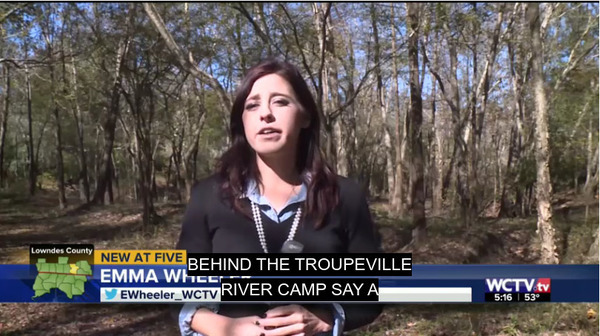 Land Between the Rivers

The River Camp would consist of bathrooms, running water, camping and picnic areas and outdoor fire pits, meant to give boaters a place to stop along the river.

“It’ll encourage people to use the rivers more, people who actually care about the rivers who will help to take care of them,” said Suwannee Riverkeeper John Quarterman. “It’s a wild area, right next to the biggest city in the Suwannee River Basin. We don’t have an ocean here, we don’t have mountains, but we do have rivers. This is right at the confluence of the two rivers, right next to the biggest city.” 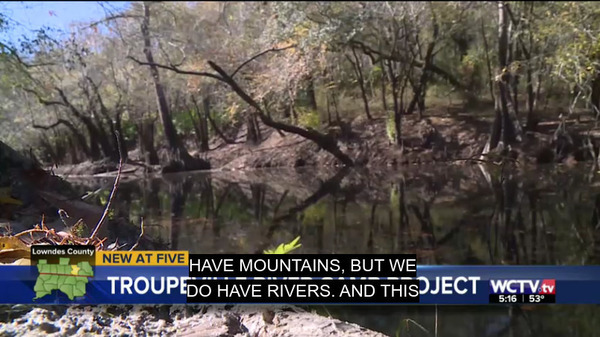 No mountains, but we do have rivers

The campground would be the only one of its kind in South Georgia. The area is also located next to nearly 50 acres of public park space and the Troupeville Boat Ramp, now operated by the Valdosta-Lowndes Parks and Recreation Authority.

Some local officials said the development could bring in new visitors, and new dollars, to the region.

“We have the park out there where there’s a landing and parking areas and things like that, so it could be a tourist attraction, and people stopping in here to buy supplies and getting ready for their river trips,” said Valdosta Mayor John Gayle. “It could be a plus for us.”

Project organizers are also looking to use part of the property for a disc golf course.

“You don’t need to take out trees, you just need a place where you can throw a disc, and there’s lots of places like that,” Quarterman said. “That will bring in more people.” 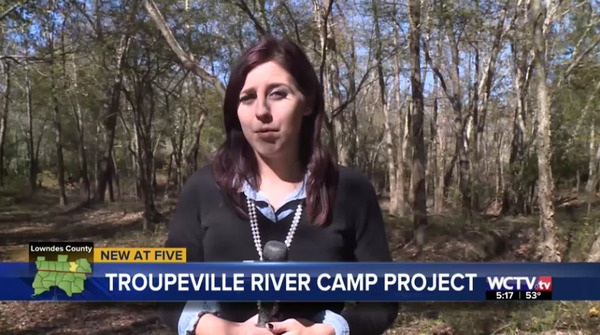 The camp is expected to cost about $674,000 to develop. The group is hoping to fund the project using a $500,000 state DNR grant, trough the Georgia Outdoor Stewardship Program. The letters of recommendation are the final piece of the pre-application process for that grant.

Project organizers have letters of support from the president of the Valdosta-Lowndes County Chamber of Commerce and the letter from the Madison County Board of Commissioners. 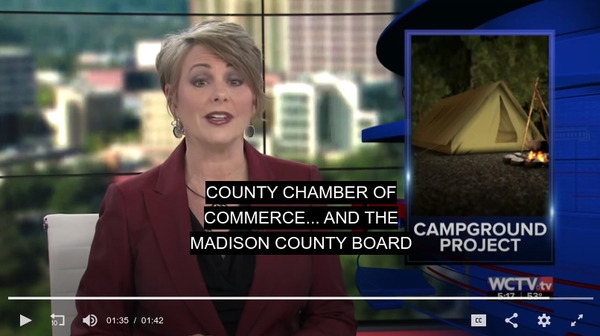 The Valdosta City Council is expected to vote on its letter on Thursday. 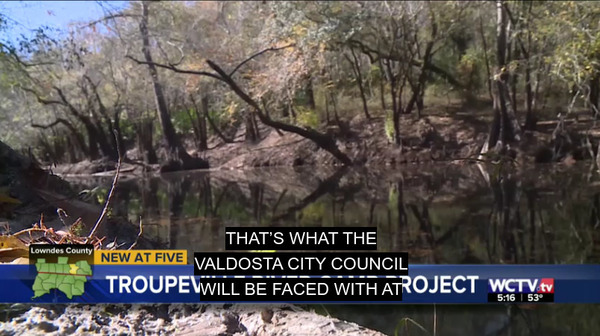 See previous blog post for the Valdosta City Council agenda item and all the related documents, including the Chamber letter and the Madison BOCC letter.

The rest of these pictures are by John S. Quarterman.

The TV report site is a bit downstream from the Troupville Boat Ramp, but still on the VLPRA property.

Don’t go on down into the Land Between the Rivers during hunting season without talking to Helen Tapp first, because there’s a hunting lease on it. 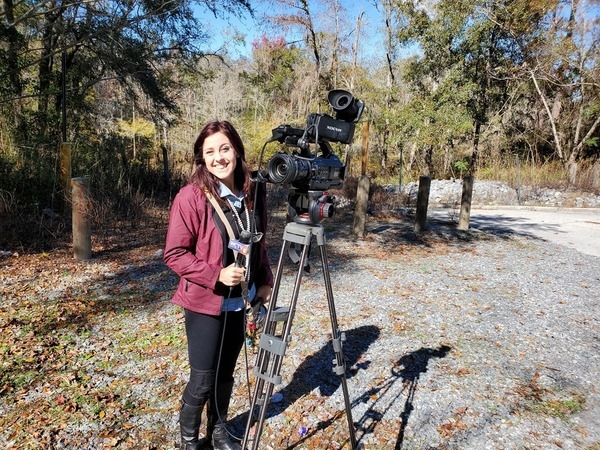 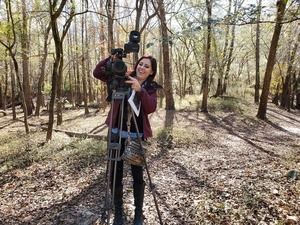 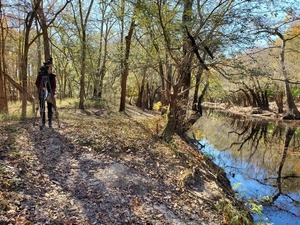 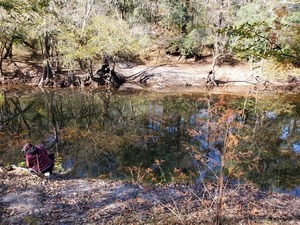 I think that’s an old bridge abutment, matching the one on the near side. The two VSU geologists who visited the site last Tuesday are working up some projects that may determine whether this was the old east-west street through Troupville. 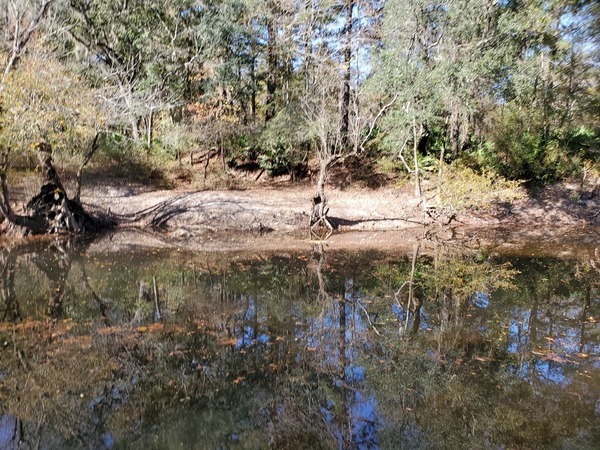 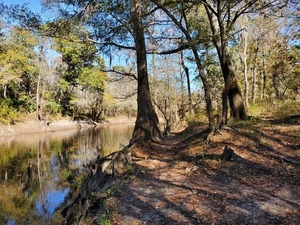 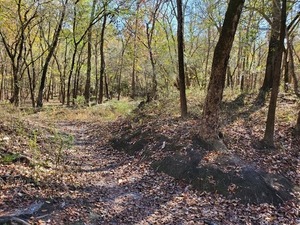 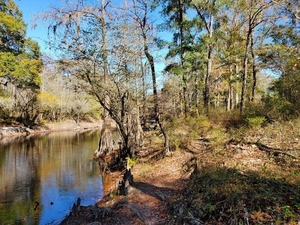 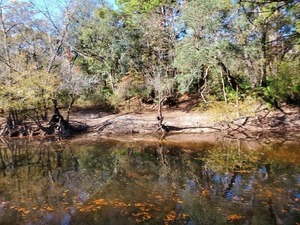 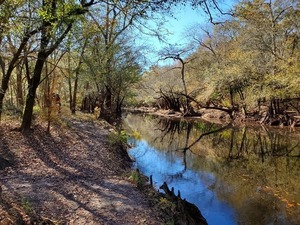 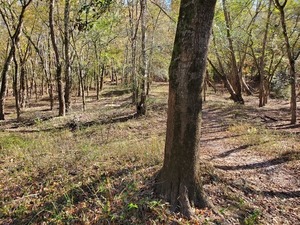