A surprising number of the Board’s nine goals for 2014 have been accomplished, and some new ones have already been added. What goals should WWALS have for 2015? 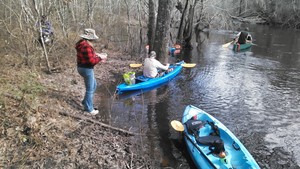 Goals accomplished include becoming an IRS 501(c)(3) and raising money for and purchasing insurance. Some we’ve been doing right along: cleanups, including Rivers Alive. Some are so much the core of what WWALS does that we didn’t even list them as goals, but we’ve been doing them anyway: monthly outings and indoor events.

The later-added goal of the Alapaha River Water Trail is well along towards accomplishment, and it’s helping us start towards the goal of outreach to schools.

Some we’ve done the initial part of and more work is needed: Army Corps of Engineers flooding study and Waycross Superfund site assistance, plus we’ve done water quality testing certification; and now need to do water quality monitoring. Some have been lagging: invasive species monitoring and mapping everything. While one, opposing the Sabal Trail pipeline, continues to eat a lot of time.

GG suggested we develop goals for 2014 and a plan to accomplish these goals.

BW wondered how many goals we could accomplish.

jsq noted the goals that had somebody take ownership for making them happen would be the ones that were achieved.

Likely owners are indicated by initials below. I’ve added a few notes about some things we’ve done for each goal.

To support what WWALS is doing, you can become a WWALS member or donate today, at http://wwals.com/blog/donations/.