for Valdosta: in February it also spilled three times into the Alapaha River watershed. At least once this was due to rains directly on Valdosta, for which the levee proposed by the Army Corps of Engineers on Sugar Creek at the Withlacoochee River wouldn’t help. It’s time for Valdosta to move along with fixing its wastewater problems. More transparency from Valdosta would also help. And I, for one, would like to see that promised Corps flooding study of the entire Suwannee River Basin.

In three different reports in February, Valdosta mentioned sewage overflows into either Knights Creek or Dukes Bay Canal, without mentioning that those flow into Mud Swamp Creek, which joins with Grand Bay Creek to form the Alapahoochee River, which joins the Alapaha River, which flows into the Suwannee River. The Florida Department of Health apparently didn’t know that, since it didn’t mention the Alapaha River in its advisories for counties downstream. But Valdosta should know, according to its own SWMP Update Phase 1 Final Report, Section 2 Methodology, 2011-01-14, that about half of Valdosta is drained by Knights Creek and Dukes Bay Canal: END_OF_DOCUMENT_TOKEN_TO_BE_REPLACED 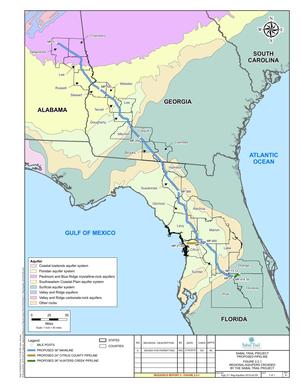