In which Spectra Energy’s Andrea Grover claims “The pipeline will not contaminate water or aquifers,”, despite Spectra’s own SEC 10-K and Sabal Trail’s own Karst Mitigation Plan. 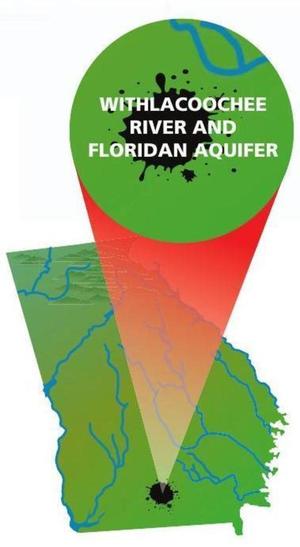 The proposed pipeline made the list for its path through sinkhole-prone regions in Georgia and Florida, including Lowndes County.

John Quarterman, WWALS Watershed Coalition president, said there is some hope for opponents of the pipeline, in the form of a strong letter from the Environmental Protection Agency to the Federal Energy Regulatory Commission, which will have the final say on construction of the pipeline.

“We got a federal agency actually doing its job, and I don’t mean FERC, I’m talking about the EPA,” Quarterman said. “They filed an amazing letter that validates pretty much everything the opposition’s been saying about this pipeline.”

Last week, the EPA recommended the pipeline be redirected away from the Floridan Aquifer, citing potential sinkholes and harmful effects to groundwater.

If the redirect is performed, the pipeline would be moved away from Lowndes County.

Quarterman said his WWALS group, which serves as an advocate for the Withlacoochee, Willacoochee, Alapaha, Little and Upper Suwannee rivers, is in a legal fight with the pipeline in Jasper, Fla., and is requesting the judge in that case enter the letter from the EPA as evidence.

Here’s that motion. And here’s much more about that Florida case to protect the Suwannee River and the Floridan Aquifer. 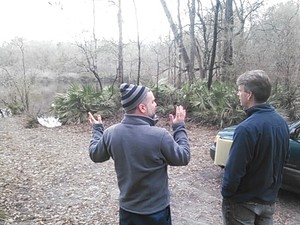 Quarterman cited the proposed route for the pipeline, which he said was in the same area as a spring near the Shiloh, Snake Nation, and Shadrick sinkholes, the last of which leaks into the Floridan Aquifer, Quarterman said.

Will you risk your drinking water to profit a company from Houston, Texas?

Here are several opportunities for you to stop this pipeline.

Sabal Trail finally speaks in the VDT story, after saying nothing in response to other recent stories:

Andrea Grover, director of stakeholder outreach of Sabal Trail, said there was misinformation being passed along regarding sinkholes and groundwater.

“The pipeline will not contaminate water or aquifers,” Grover said. “The pipeline will be made of high-strength steel with epoxy coating, and the natural gas is transported in a gaseous state. Natural gas is lighter than air which means in the highly unlikely event that natural gas escapes from the pipeline, the gas can only travel up through the soil or water into the atmosphere, where it dissipates.”

That’s not what Ms. Grover’s own company’s federal filings say. Andrea Grover is Director of Stakeholder Outreach at Spectra Energy, according to her own Linkedin profile. Spectra is the operator of Sabal Trail, according to Spectra’s own press release of 26 July 2013 announcing Sabal Trail, as well as sworn testimony in Jasper by Spectra employees. According to Spectra Energy’s SEC Form 10-K filed 27 Feb 2015 for the fiscal year ended December 31, 2014, page 24:

It’s no defense to say this would be a new pipeline, both because we don’t know what kind of lubricating oils Spectra uses now, and because Sabal Trail would be getting its gas from older pipelines, quite probably including Spectra’s Texas Eastern pipeline that was fined a record $15 million by EPA for PCB spills at 89 sites, was fined $18.6 million by Pennsylvania for some of the same PCB spills, plus more than $200 million in cleanup costs.

Grover said the draft environmental impact statement, put out by FERC, indicated the pipeline would not significantly impact karst terrain, springs or the Floridan Aquifer.

Notice she never says the pipeline wouldn’t affect the karst area, just not “significantly”. Do you feel insignificant yet?

The general risks associated with HDD construction methods in karst areas include difficulties arising from very loose unstable soils and open voids along the drill path. More specifically, these risks include:

There’s so much of this kind of admission in the Karst Mitigation Plan I’ve had to put it in a separate blog post.

Back to the VDT:

“Sabal Trail has diligently assessed these geological areas near the pipeline route through research, surveys, and geological studies,” Grover said. “We have employed local experts to ensure we have the best information to determine the location and design of the pipeline.” That’s not what actual local experts said in sworn testimony in the hearing in Jasper, Florida. Ms. Grover was sitting there the entire time, so she must know this. That’s her straight behind the camera tripod in this picture.

Good thing she wasn’t called to the witness stand; if she testified like that, her testimony might have been thrown out as unfounded speculation, since her companies’ own documents contradict her assertions.

This isn’t the first time Ms. Grover has been quoted in the VDT saying things that are contradicted by documents produced by her own company. Remember this from November 2014?

Property owners state that these letters contradict a recent statement by Grover to the Times that accusations that they had been threatened with eminent domain on their properties was “hard to believe.”

That one was worth a Pinocchio nose.

This one today is worth a dress on fire.

4 thoughts on “Sabal Trail on Dirty Dozen again in VDT”