You can believe what Spectra’s Andrea Grover said in the VDT today, or you can believe more from Sabal Trail’s own Karst Mitigation Plan, which says they already lost drilling fluids from test drillings under the Withlacoochee River between Brooks and Lowndes Counties, and if they cause a sinkhole they can’t fill they’ll “monitor” it.

How will they do that if a sinkhole forms under the pipeline under the river, or it breaks or explodes, like a Spectra pipeline did in Little Rock, Arkansas in May of this year?

Not just for pilot holes: drilling fluid loss is quite possible during reaming for the actual pipe hole. And this drilling fluid can contain lubricants with unspecified ingredients.

Sabal Trail knows about fracture traces such as the one across the sinkholes on Shiloh Road, Snake Nation Road, Shadrick Sink, etc., in Lowndes County. But what is it going to do about them?

Fracture traces were located by identifying large-scale parallel lines of sinkholes and river segments on aerial photographs. Fracture traces of significant scale that intersected the proposed pipeline alignment were identified in Florida (Hamilton, Madison, Suwannee, Gilchrist, Alachua and Levy Counties) and in the counties in Georgia where the Floridan aquifer was mostly unconfined (Terrell, Dougherty, Brooks, and Lowndes Counties).

It’s safe to assume EPA also read Sabal Trail’s Karst Mitigation Plan, before writing the EPA letter to FERC, and also was not convinced any real mitigation was proposed.

Here’s the Karst Mitigation Plan on boring under the Withlacoochee River from Brooks County to Lowndes County, just north of US 84. They already did test wells from which they already lost drilling fluids!

This table extract includes also the rows about the Flint River, the Suwannee River, and the Santa Fe River. Pages 24-26 of 31, Table 3. Results of Geophysical and Geotechnical Testing for HDD Crossings, rows 2-5:

Notice that table doesn’t say they’re going to successfully fix any drilling leaks, merely that “Mitigation measures outlined in this document will increase likelihood of successful installation.” Any damage to the karst limestone containing your drinking water Sabal Trail rates as “insignificant”, but successfully installing their pipeline is very important to them. Is it important to you?

This lack of actually fixing anything is spelled out in another section, quoted below in full, which says they’ll try pouring various things into a sinkhole, but if that doesn’t work, they’ll just move the pipeline to the side, presumably leaving the unfixed sinkhole. Page 27-28 of 31, § 7.1.2. Ground Subsidence or Sinkhole Formation:

As required by Code 49 of Federal Regulations, Part 192.613, route surveillance will be conducted during construction and operation of the facilities, along with training of surveillance personnel, to monitor the pipeline alignment for evidence of subsidence, surface cracks, or depressions which could indicate sinkhole formation. Signs of sinkhole formation, ground subsidence or surface depressions will be immediately and clearly marked. Work will be temporarily halted and the immediate area around the depression evacuated until it is deemed safe and stable. The project geotechnical engineer will also be notified of the occurrence.

Based on the direction of the geotechnical engineer, the area may be backfilled with clean sand fill to temporarily stabilize the area until further evaluation can be conducted. This may include geophysical and/or geotechnical testing.

In some cases, pipeline construction will necessitate the backfilling of closed depressions without visible openings/voids at the ground surface and depressions with karst voids or openings exposed to ground surface. A common approach is to infill these features with clean sand. Backfill activity would consist initially of vegetation removal and placement of a clean sand fill. If it is an “open hole” with no readily visible bottom, an effort should be made to use water to aid in the filling process.

If sand infill does not provide for a stable subgrade for pipe support, compaction grouting may be required. Compaction grouting is a common method of remediating ongoing active or potential sinkhole formation. The process involves installing pipe by driving or drilling into the area of concern and injecting grout under pressure to fills voids, cavities and soft zones within the limestone formation. As the pipe is withdrawn, grout is continually pumped to stabilize any loose or raveled soils in the overburden by compression and compaction. To effectively stabilize the feature without pumping excessive amounts of grout, a volume limit is typically established for each hole. If the limit is reached, secondary or tertiary points are added to ensure the feature is stabilized.

So they’ll try filling it in with sand, or water and sand, or grout, and if that doesn’t work, they’ll leave it unfixed and move the pipeline.

I added the emphasis on and operation.

Riddle me this: if a sinkhole develops under the pipeline under a river or the pipeline breaks, how is Sabal Trail going to even detect it, much less “mitigate” it?

And Spectra pipelines do break under rivers, like this one under the Arkansas River in Little Rock, 31 May 2015:

“This segment of pipeline traveled downstream from its original location and now lies along the north bank of the Arkansas River. The nearest end of the pipe segment appears to be approximately 100 feet downstream from the original pipeline crossing,” a spokesperson for the company said in a news release earlier today.

Spectra said it will begin recovering the pipe for inspection as soon as river conditions permit it to send divers into the water, perhaps as soon as tomorrow. The Arkansas remains dangerously high after weeks of rain.

“Once the recovery process begins, the pipe will be cut into sections for safe removal and transport from the area. Some of the cuts will be made under water, and further cuts will take place once the pipe is raised onto a barge,” the spokesperson said.

The main line of the Texas Eastern — which is a little downstream of the auxiliary section — remains turned off for now as a precaution. “Sonar surveys indicate that approximately 450 feet of the main line is now partially uncovered at the riverbed,” Spectra said. Whether a similarly eroded condition may have contributed to the backup line’s failure is still unknown.

I did get confirmation from a Spectra representative over the weekend about a portion of the account given by Mike Metzler, who examined damage caused to the nearby towboat Chris M after the incident. The company representative said that concrete was indeed found on the deck of the vessel, and that this concrete was coating from the ruptured auxiliary pipeline. However, he maintained that “there is no evidence of combustion”; Metzler earlier said he believed the concrete fragments he saw were charred from a fire. 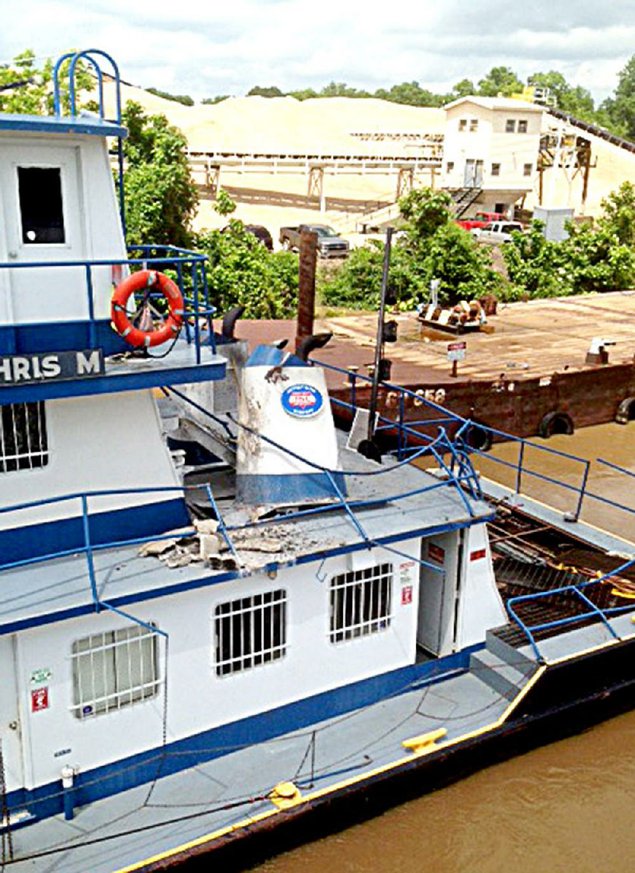 A pipeline exploding under a river seems like an environmental problem, as well as a risk to navigation and thus riparian rights.

And the likely cause of all this seems to be erosion and corrosion not detected by the pipeline company, namely Spectra Energy, as in so many cases before.

Is any of this what you want to see under the Outstanding Florida Water of the Suwannee or Santa Fe Rivers in Florida, or under the Withlacoochee, Flint, or Chattahooochee Rivers in Georgia? Especially in a sinkhole-prone area where explosions and leaks could affect water wells?

If not, you can say so tonight in Albany, GA at an air quality hearing or in comments later, as well as through numerous other methods.