See the WWALS calendar for any more events already scheduled.

All these outings are in Georgia. Which is a switch, since last year we concentrated on Florida, partly because WWALS added the upper Suwannee River as territory in summer 2015 (thanks, Waterkeeper® Alliance!), and the legal case, WWALS v Sabal Trail & FDEP (thanks to all who testified, contributed to the legal fund, and otherwise helped; stay tuned for a likely appeal). 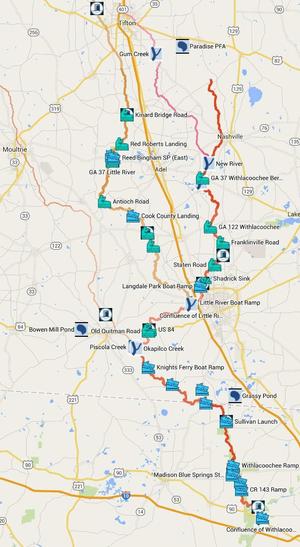 Many Georgians have paddled on those Florida outings, and now we invite Floridians to these Georgia outings!

Plus there will be informal field trips and scouting expeditions. For example, some of us will be scouting Grand Bay on Saturday December 5th to see if the canoe trail is boatable; if it is, we may add boating to the December 12th Hike.

And some time in May 21st will be the annual BIG Little River Paddle Race at Reed Bingham State Park on the Little River, co-sponsored by WWALS and Friends of Reed Bingham.

Watch the WWALS blog, facebook page, Meetup, or twitter for still more outings and events, or check the WWALS calendar.