Thanks to the Hamilton Board of County Commissioners for standing up for its people, 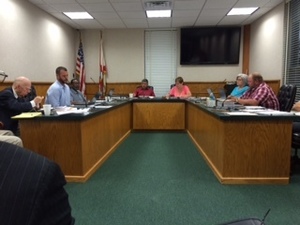 and for all those affected by the invading Sabal Trail fracked methane pipeline.

Tonight, Tuesday March 15, 2016, Hamilton County unanimously voted to request that the Army Corps of Engineers perform an independent study on site concerning the ommisions and discrepancies contained in the final environmental study that FERC and Florida DEP used to issue the[ir] permit[s] for the Sabal Trail pipeline. 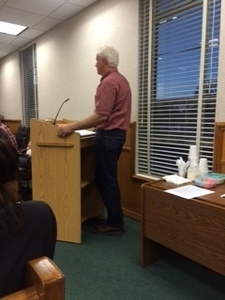 comparing a geological study by local geologist Dennis Price with the final EIS Sabal Trail study submitted to FERC on which FERC based the permit for the Sabal Trail pipeline.

Hamilton County was prompted to write this letter after attending the Suwannee BOCC workshop a few weeks ago where members of both boards hiked the Suwannee River crossing and saw for themselves the numerous sinkholes in and around the pipeline route. A route that Sabal Trail claimed the close[s]t sinkhole was 750′ from the pipeline route.

One Hamilton County commissioner asked if Suwannee County was still taking an unheard of neutral stance on this for export fracked gas pipeline.

Thank you to all of the commissioners of Hamilton County for taking action to protect their constituents and our sole source of water — the Floridan Aquifer.

Deanna Mericle took the picture. Dennis Price, the Practicing Geologist who wrote the geological study Debra refers to, was present. All three are WWALS members. Debra lives in Suwannee County, and Price and the Mericles in Hamilton County.

Bobbie C. Billie of the Original Miccosukee Simanolee Nation and Shannen Larson came up from south Florida near the Everglades to lend support. They travelled even longer distances to help oppose Sabal Trail for years now. FPL wants to build a natural gas power plant in Hendry Count, FL that likely would get its fracked methane from Sabal Trail.

Here’s what I sent them on behalf of WWALS earlier that same day. Also before the meeting, others sent Hamilton County requests to write to USACE, including Johanna de Graffenreid for Gulf Restoration Network and Maryvonne Devensky of the Suwannee-St John’s Group of Sierra Club Florida And of course Debra Johnson is a board member of SpectraBusters, as am I. Thanks to the increasing number of people and organizations who oppose this unnecessary Sinkhole Trail boondoggle.