Received today from GA-EPD, although they issued it three weeks ago. 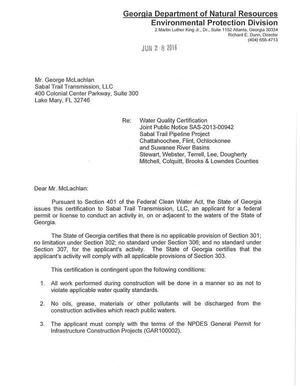 Basically, they believed Sabal Trail, with a few requirements, and issued the permit.

GA-EPD sent three documents, which are inline below with links to the PDF copies that were attached:

Sabal Trail Transmission, LLC is seeking a Section 401 Water Quality Certification for impacts to waters of the US. associated with the construction of a 36-inch diameter natural gas transmission pipeline, which will be approximately 162 miles long and pass through nine southwest Georgia counties. This project connects to associated pipeline projects in adjacent states of Alabama and Florida. Almost all of the pipeline will be installed by “open trench construction method” wherein an approximately seven foot deep trench depth, combined with 36-inch pipeline size, will yield a minimum of three feet of finished backfill cover as required by US. Department of Transportation regulations, Deeper burial may occur in certain areas such as agricultural land, roads, railroads, or under water bodies. Installation of the pipeline will occur in limited instances by means of the horizontal directional drilling (HDD) construction technique. The HDD crossings will occur at four locations in Georgia including the Chattahoochee, Flint, Ochlockonee and Withlacoochee Rivers.

In Georgia, the pipeline project will cross a total of 126 water bodies: 47 perennial streams or rivers, 47 intermittent streams, 25 ephemeral drainageways (which are not regularly considered jurisdictional stream features by the Corps of Engineers, but which are designated for project inclusion for purposes of Federal Energy Regulatory Commission (FERC) project administration), and 7 palustrine open water features (ponds/lakes). Of these 126 waterbody crossings, 83 are identified as “minor” at less than 10 feet wide, 36 are “intermediate” at 10-to-100 foot width, and 7 are “major” crossings greater than 100 feet in size. There will be no permanent wetland impacts by fill placement in Georgia. A total of 122.75 acres of various wetland types will be disturbed by the project’s construction workspaces, including 10.31 acres of emergent wetlands, 6.83 acres of scrub-shrub habitat, and 105.61 acres of forested wetlands. Of this, a total of 41.46 acres of permanent wetland impacts by conversion from forested wetland type to emergent or scrub»shrub wetlands will occur in the state. Another 81.29 acres of wetlands will experience temporary impacts wherein original vegetation conditions will eventually become reestablished by natural regrowth following construction events.

The project applicant has prepared extensive environmental assessment documentation and has undertaken substantial coordination with federal agencies including FERC, the US. Army Corps of Engineers (USACE) and the Environmental Protection Agency (EPA). It is evident that the applicant has made substantial efforts to avoid and minimize wetland and stream impacts. Such efforts include: overall upland-focused route selection, employing generally perpendicular crossings through wetlands, crossings made at narrow portions of unavoidable wetlands, avoidance of longitudinal pipeline routings through riparian corridors and wetland bottomlands, colocation of the pipeline along paths of existing infrastructure such as utility lines, pipelines, and roadways, single-pass construction approach at streams and wetlands, and use of mostly “dry” crossings of streams wherein coffer dams, flumes and pump-around techniques are employed to maintain near normal stream flows during trench excavation and installation of pipeline. Most individual construction events will be relatively brief term comprising a few days at any particular location.

An associated water withdrawal letter of permission is being prepared by EPD’s Surface Water Unit which will temporarily authorize use of water for aforementioned HDD borings and for hydrostatic pressure testing of sections of welded and completed pipeline. Following alignment adjustments and coordination with EPD’s Erosion & Sedimentation Control Unit it has been determined that this project is exempt from stream buffer variance requirements. This certification has been produced following internal coordination with other sections within EPD including the Erosion & Sedimentation Control Unit, the Surface Water Unit, the Watershed Planning & Monitoring Program and the State Geologist.

THROUGH: James A. Capp [initialed]

As discussed in the accompanying memo, Watershed Branch staff has completed the review of the Sabal Trail Pipeline Project application package, including all comments received.

As noted on the routing form, this project was subject to an Army Corps of Engineers (Corps) Joint Public Notice (JPN) When comments are received under a JPN, the Corps takes the lead and requests that the applicant prepare responses.

The small handful of comments that were addressed specifically to Georgia’s 401 process were either so general as to not be actionable or they were used as the basis for further inquiry with the applicant and subsequently informed specific conditions. The remainder of the vast majority of the comments were addressed to and responded . by Florida and the Federal Energy Regulatory Commission The issues raised in the various comments have been satisfactorily addressed.

Pursuant to Section 401 of the Federal Clean Water Act, the State of Georgia issues this certification to Sabal Trail Transmission, LLC, an applicant for a federal permit or license to conduct an activity in, on or adjacent to the waters of the State of Georgia.

This certification is contingent upon the following conditions:

This certification does not relieve the applicant of any obligation or responsibility for complying with the provisions of any other laws or regulations of other federal, state or local authorities.

It is your responsibility to submit this certification to the appropriate federal agency.