Update 2018-12-30: The new organization WATERKEEPERS Florida, as one of its first acts, on December 19, 2018, signed the Resolution Against Phosphate Mines in Florida, thus committing all thirteen of its member organizations.

Update 2018-11-13: Miami Waterkeeper has signed, bringing it to a round dozen Florida Waterkeepers. 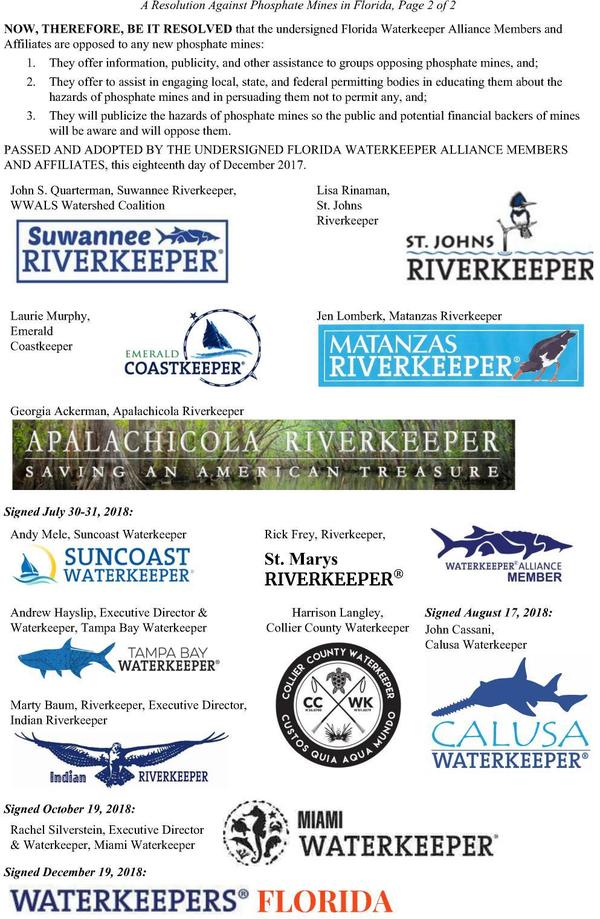 Delivered via email as PDF to the Union BOCC before their phosphate mine workshop of Monday, December 18, 2017.

A Resolution
Against Phosphate Mines in Florida

WHEREAS, Waterkeeper Alliance Members are obligated and dedicated to protect the water resources, citizens’ interests, and related benefits in their jurisdictions; and 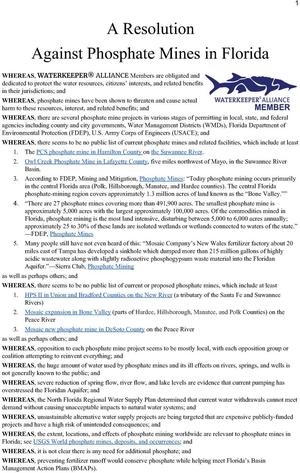 WHEREAS, phosphate mines have been shown to threaten and cause actual harm to these resources, interest, and related benefits; and

WHEREAS, there are several phosphate mine projects in various stages of permitting in local, state, and federal agencies including county and city governments, Water Management Districts (WMDs), Florida Department of Environmental Protection (FDEP), U.S. Army Corps of Engineers (USACE); and

WHEREAS, there seems to be no public list of current phosphate mines and related facitlities, which include at least

as well as perhaps others; and

WHEREAS, there seems to be no public list of current or proposed phosphate mines, which include at least

as well as perhaps others; and

WHEREAS, opposition to each phosphate mine project seems to be mostly local, with each opposition group or coalition attempting to reinvent everything; and

WHEREAS, the huge amount of water used by phosphate mines and its ill effects on rivers, springs, and wells is not generally known to the public; and

WHEREAS, severe reduction of spring flow, river flow, and lake levels are evidence that current pumping has overstressed the Floridan Aquifer; and

WHEREAS, unsustainable alternative water supply projects are being targeted that are expensive publicly-funded projects and have a high risk of unintended consequences; and

WHEREAS, it is not clear there is any need for additional phosphate; and 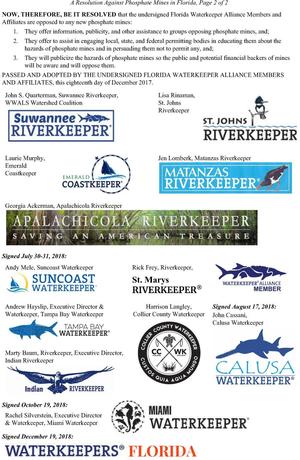 NOW, THEREFORE, BE IT RESOLVED that the undersigned Florida Waterkeeper Alliance Members are opposed to any new phosphate mines:

PASSED AND ADOPTED BY THE UNDERSIGNED FLORIDA WATERKEEPER ALLIANCE MEMBERS AND AFFILIATES, this eighteenth day of December 2017.