Duke Energy Florida is no longer in the Customer Index in Sabal Trail’s FERC-required Informational Postings, as of January 1, 2018. Only Florida Power & Light is listed, still for 400,000 dekatherms per day. So what we’ve been saying since November appears to be true: Duke Energy Florida is no longer a Sabal Trail customer, which means there’s no excuse for Sabal Trail to have a Certificate of Convenience and Necessity, and FERC (or the D.C. Circuit Court) should revoke that permit.

Update 2018-01-05: Duke previously said it did NOT need Sabal Trail for the Crystal River power plant Duke is building, and in any case it could get the gas from Gulfstream or FGT if Sabal Trail failed, then Duke bought part of Sabal Trail, then Sabal Trail’s uncommitted capacity dropped by the same amount Duke was supposedly wanting, and now Duke is missing from Sabal Trail’s customer list. Plus most of Duke Energy Florida’s operational gas-fired power plants are being fed by FGT or Gulfstream, and apparently none from Sabal Trail. 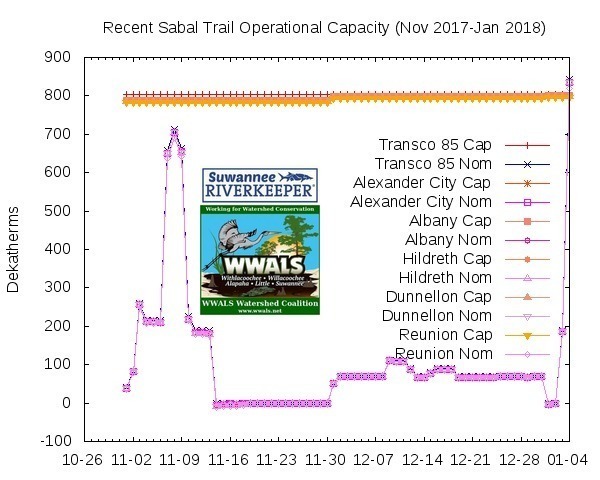