Despite Bernard McNamee’s statement early in the meeting that his agenda was to listen, FERC didn’t seem to want to hear me mention Sabal Trail’s leaks or their lack of LNG oversight yesterday. More on that later. Meanwhile, here is the letter I sent FERC Wednesday 19 December 2018 via PDF as FERC Accession Number 201812195184, Sabal Trail Hildreth Compressor Station Leak 2018-09-29, Supplemental Information / Request of WWALS Watershed Coalition, Inc. under CP15-17, et. al. 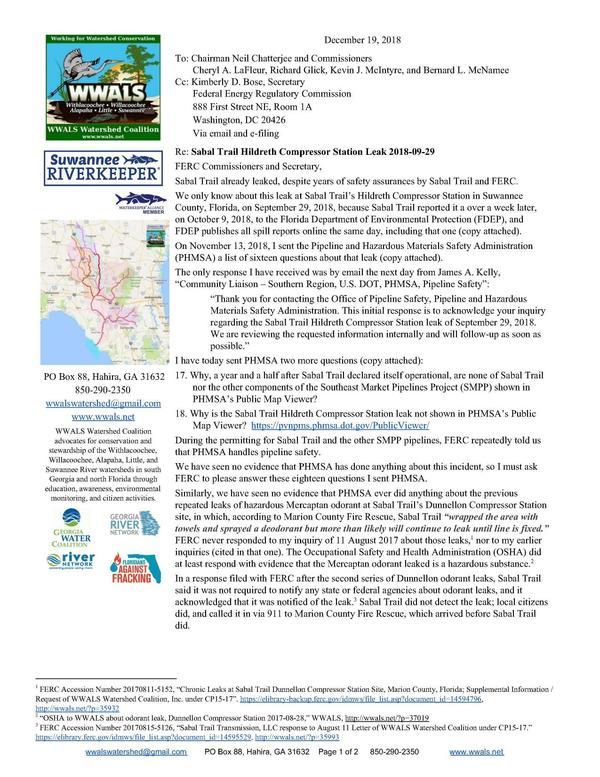 To: Chairman Neil Chatterjee and Commissioners

Via email and e-filing

We only know about this leak at Sabal Trail’s Hildreth Compressor Station in Suwannee County, Florida, on September 29, 2018, because Sabal Trail reported it a over a week later, on October 9, 2018, to the Florida Department of Environmental Protection (FDEP), and FDEP publishes all spill reports online the same day, including that one (copy attached).

On November 13, 2018, I sent the Pipeline and Hazardous Materials Safety Administration (PHMSA) a list of sixteen questions about that leak (copy attached).

The only response I have received was by email the next day from James A. Kelly, “Community Liaison – Southern Region, U.S. DOT, PHMSA, Pipeline Safety”:

“Thank you for contacting the Office of Pipeline Safety, Pipeline and Hazardous Materials Safety Administration. This initial response is to acknowledge your inquiry regarding the Sabal Trail Hildreth Compressor Station leak of September 29, 2018.  We are reviewing the requested information internally and will follow-up as soon as possible.”

17. Why, a year and a half after Sabal Trail declared itself operational, are none of Sabal Trail nor the other components of the Southeast Market Pipelines Project (SMPP) shown in PHMSA’s Public Map Viewer?

During the permitting for Sabal Trail and the other SMPP pipelines, FERC repeatedly told us that PHMSA handles pipeline safety.

We have seen no evidence that PHMSA has done anything about this incident, so I must ask FERC to please answer these eighteen questions I sent PHMSA.

Similarly, we have seen no evidence that PHMSA ever did anything about the previous repeated leaks of hazardous Mercaptan odorant at Sabal Trail’s Dunnellon Compressor Station site, in which, according to Marion County Fire Rescue, Sabal Trail “wrapped the area with towels and sprayed a deodorant but more than likely will continue to leak until line is fixed.” FERC never responded to my inquiry of 11 August 2017 about those leaks,[1] nor to my earlier inquiries (cited in that one). The Occupational Safety and Health Administration (OSHA) did at least respond with evidence that the Mercaptan odorant leaked is a hazardous substance.[2]

In a response filed with FERC after the second series of Dunnellon odorant leaks, Sabal Trail said it was not required to notify any state or federal agencies about odorant leaks, and it acknowledged that it was notified of the leak.[3] Sabal Trail did not detect the leak; local citizens did, and called it in via 911 to Marion County Fire Rescue, which arrived before Sabal Trail did.

“The final EIS explains that the applicants will install data acquisition systems that monitor pipeline flows and pressures at various points along the system.  In the event an incident occurs along the pipeline, the data acquisition systems system will enable the pipeline to remotely or automatically close mainline valves and will utilize a combination of radio and satellite communications to transmit data from the pipeline to the applicants’ current gas control centers."

Yet we have seen no evidence that Sabal Trail detected the Hildreth Compressor Station Leak, either, and by its own report to FDEP the leak was not automatically closed.

That same section of the FEIS tells us that:

"The PHMSA ensures that people and the environment are protected from the risk of pipeline incidents.  This work is shared with state agency partners and others at the federal, state, and local level.”

We see no evidence that PHMSA is protecting people or environment.

“However, if a pipeline leak were to occur beneath a waterbody crossing, natural gas would percolate through the soil and sediments underlying the stream, rise through the water column of the stream, and rapidly dissipate into the atmosphere.  Considering the narrow width of the majority of the waterbodies that would be crossed and their relatively shallow depth, most of the natural gas would be rapidly released to the atmosphere, and any change in water quality resulting from possible oxygen displacement would be minor.  Because fish are mobile, most would have the ability to avoid or leave the areas with unfavorable environmental conditions resulting from such a release.  We have determined the chance for a pipeline leak to affect aquatic resources is extremely remote.”

FERC’s glib determinations do not reassure us about the safety of the spawning grounds of the Gulf Sturgeon, where the Sabal Trail pipeline crosses under the iconic Outstanding Florida Water, the Suwannee River. Especially after PHMSA’s lack of oversight of the repeated Dunnellon Compressor Station site odorant leaks and of the Hildreth Compressor Station methane and VOC leak, we are not reassured of the safety of Sabal Trail for people or environment anywhere else, either, including under the Withlacoochee River in Georgia, and the Santa Fe and Withlacoochee (south) Rivers in Florida, and by numerous schools, businesses, and homes.

If FERC cannot answer for these leaks, and PHMSA does not, please tell us: who is in charge of pipeline safety?

Further, at the ends of the SMPP pipeline chain there are inland liquid natural gas (LNG) export terminals authorized by the U.S. Department of Energy Office of Fossil Energy (FE) after FERC disclaimed responsibility for them in a 2015 FERC Order, despite a dissent by then-Commissioner Norman Bay.[6] During permitting for Sabal Trail, FERC assured us that there was no connection, even though for example Strom, Inc., now locating in Crystal River, Florida, had a FERC docket open at the time in which it referred to its FE docket that spelled out that Strom expected Sabal Trail to be one of its gas sources.

Who is in charge of safety for such terminals?

Given FERC’s repeated assurances of safety that do not seem to be borne out by the evidence, it may even be worth Commissioners, especially new Commissioners, pondering whether FERC pipeline and LNG terminal decisions are shielded by the Doctrine of Qualified Immunity of Harlow v. Fitzgerald, 457 U.S. 800, 815 (1982).[7]

[7] "THE DOCTRINE OF QUALIFIED IMMUNITY. WHAT IS IT AND WHY DO I CARE?" Jim Chapman, PATC, May 2016, http://www.patc.com/weeklyarticles/2016_qualifiedimmunity_chapman.shtml 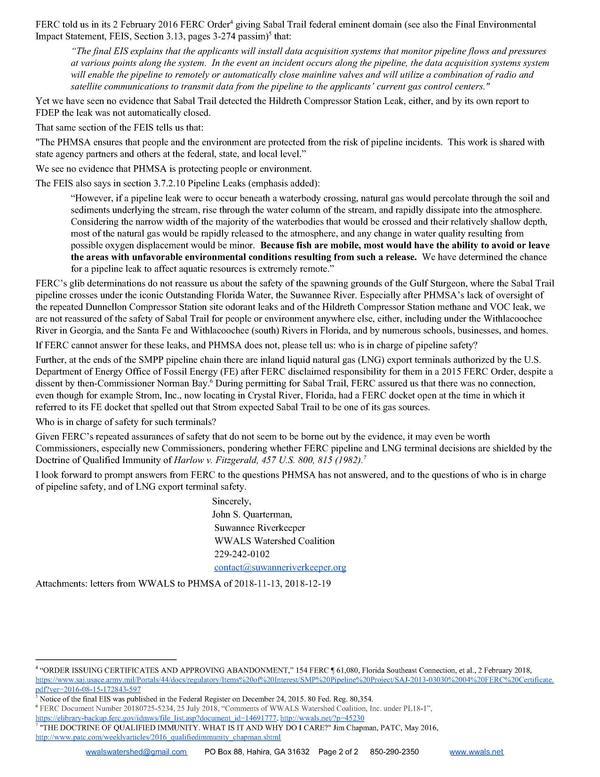 The letter to PHMSA of the same day is online here.

Thanks to all on the WWALS Watershed Issues Committee who worked on the letter, especially Janet Barrow and Cecile Scofield.