As you can see by the numbers on Sabal Trail’s current map, even at the other stations it is shipping less than half (393) of its currently stated capacity (813). At Reunion, even the capacity is lower (711), and the amount shipped (Nom) is a sixth of that. 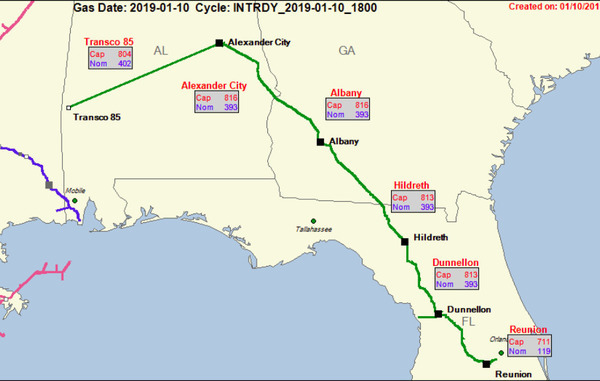 In Summer 2018 you might have gotten the impression Sabal Trail had finally got the hang of shipping gas. 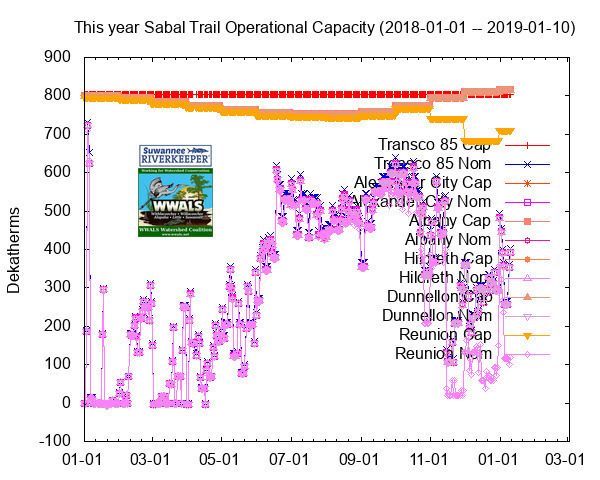 But in October, Reunion started to diverge, and on November 15, 2018, Reunion crashed to zero for a week, apparently dragging everything else down quite a bit at the same time. 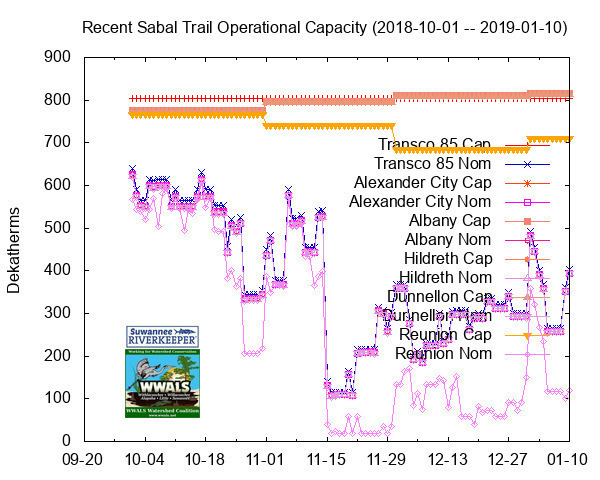 Reunion burst up at the end of December, but couldn’t keep it up. 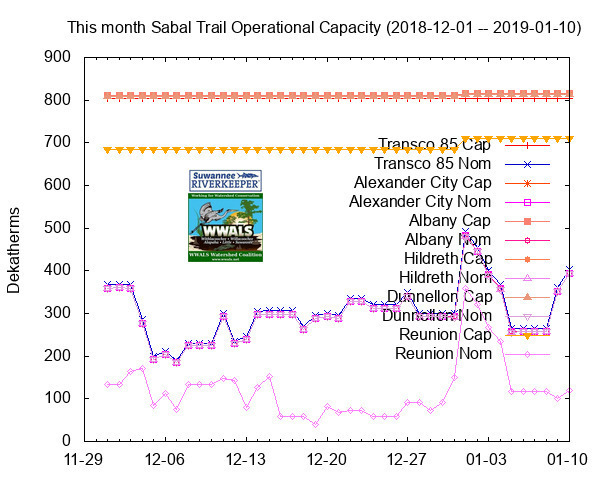 The next station upstream from Reunion is Dunnellon, where the Citrus County Pipeline branches off. That goes to Duke Energy Florida (DEF)’s new gas power plant in Crystal River. Is that were all this gas is going?

It doesn’t look like the difference between Dunnellon and Reunion ever has reached 400 thousand Dth. So is that DEF plant not using all that gas? Or is some of it going somewhere else?

For that matter, the current 393 thousand Dkh upstream of Reunion is nowhere near the 720 Sabal Trail claims its customers want.

And FPL’s connection is supposed to be at Sabal Trail’s vaunted Central Florida Hub south of Orlando, which is basically the Reunion Compressor Station and its interconnects with Florida Gas Transmission (FGT) and Gulfstream, as well as FPL’s Florida Southeast Connection (FSC) onwards to FPL’s power plants at Lake Okeechobee and on the Atlantic coast. Apparently FPL doesn’t need the gas.

What is this Critical Notice about?

STT reserves the right to take any additional actions that are necessary to protect the integrity of its system. These actions may include issuance of Action Alerts and/or Operational Flow Orders.

Shippers are requested to advise their operational personnel to monitor the LINK System for any further notices.

What if you’re a member of the at-risk public, or a customer of FPL? Who do you ask about this stuff?

Thanks to eagle-eye Janet Barrow for spotting these anomalies.

Oh, and still nothing from FERC or PHMSA about that September 29, 2018 Sabal Trail leak at its Hildreth Compressor Station in Suwannee County, Florida. That leak doesn’t seem to have affected Sabal Trail’s reported gas deliveries. So what is this Critical Notice, and why can’t Sabal Trail keep the gas flowing? Is there some bigger, unreported, leak or other problem?

Or is there just no need for this hazardous stranded-asset pipeline boondoggle?