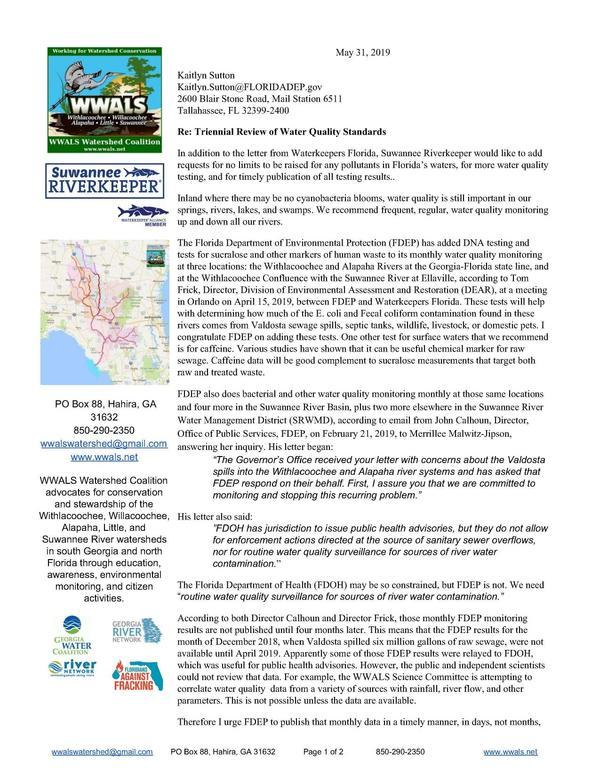 Emailed to FDEP as PDF, and displayed here below.

In addition to the letter from Waterkeepers Florida, Suwannee Riverkeeper would like to add requests for no limits to be raised for any pollutants in Florida’s waters, for more water quality testing, and for timely publication of all testing results..

Inland where there may be no cyanobacteria blooms, water quality is still important in our springs, rivers, lakes, and swamps. We recommend frequent, regular, water quality monitoring up and down all our rivers.

The Florida Department of Environmental Protection (FDEP) has added DNA testing and tests for sucralose and other markers of human waste to its monthly water quality monitoring at three locations: the Withlacoochee and Alapaha Rivers at the Georgia-Florida state line, and at the Withlacoochee Confluence with the Suwannee River at Ellaville, according to Tom Frick, Director, Division of Environmental Assessment and Restoration (DEAR), at a meeting in Orlando on April 15, 2019, between FDEP and Waterkeepers Florida. These tests will help with determining how much of the E. coli and Fecal coliform contamination found in these rivers comes from Valdosta sewage spills, septic tanks, wildlife, livestock, or domestic pets. I congratulate FDEP on adding these tests. One other test for surface waters that we recommend is for caffeine. Various studies have shown that it can be useful chemical marker for raw sewage. Caffeine data will be good complement to sucralose measurements that target both raw and treated waste.

FDEP also does bacterial and other water quality monitoring monthly at those same locations and four more in the Suwannee River Basin, plus two more elsewhere in the Suwannee River Water Management District (SRWMD), according to email from John Calhoun, Director, Office of Public Services, FDEP, on February 21, 2019, to Merrillee Malwitz-Jipson, answering her inquiry. His letter began:

“The Governor’s Office received your letter with concerns about the Valdosta spills into the Withlacoochee and Alapaha river systems and has asked that FDEP respond on their behalf. First, I assure you that we are committed to monitoring and stopping this recurring problem.”

”FDOH has jurisdiction to issue public health advisories, but they do not allow for enforcement actions directed at the source of sanitary sewer overflows, nor for routine water quality surveillance for sources of river water contamination.”

The Florida Department of Health (FDOH) may be so constrained, but FDEP is not. We need “routine water quality surveillance for sources of river water contamination.”

According to both Director Calhoun and Director Frick, those monthly FDEP monitoring results are not published until four months later. This means that the FDEP results for the month of December 2018, when Valdosta spilled six million gallons of raw sewage, were not available until April 2019. Apparently some of those FDEP results were relayed to FDOH, which was useful for public health advisories. However, the public and independent scientists could not review that data. For example, the WWALS Science Committee is attempting to correlate water quality data from a variety of sources with rainfall, river flow, and other parameters. This is not possible unless the data are available. Therefore I urge FDEP to publish that monthly data in a timely manner, in days, not months, after the water quality testing. 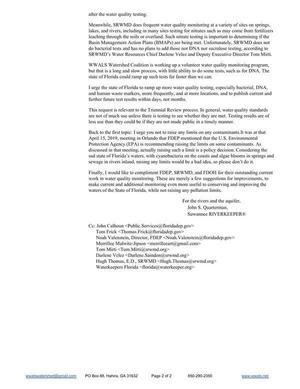 Meanwhile, SRWMD does frequent water quality monitoring at a variety of sites on springs, lakes, and rivers, including in many sites testing for nitrates such as may come from fertilizers leaching through the soils or overland. Such nitrate testing is important to determining if the Basin Management Action Plans (BMAPs) are being met. Unfortunately, SRWMD does not do bacterial tests and has no plans to add those nor DNA nor sucralose testing, according to SRWMD’s Water Resources Chief Darlene Velez and Deputy Executive Director Tom Mirti.

WWALS Watershed Coalition is working up a volunteer water quality monitoring program, but that is a long and slow process, with little ability to do some tests, such as for DNA. The state of Florida could ramp up such tests far faster than we can.

I urge the state of Florida to ramp up more water quality testing, especially bacterial, DNA, and human waste markers, more frequently, and at more locations, and to publish current and further future test results within days, not months.

This request is relevant to the Triennial Review process. In general, water quality standards are not of much use unless there is testing to see whether they are met. Testing results are of less use than they could be if they are not made public in a timely manner.

Back to the first topic: I urge you not to raise any limits on any contaminants.It was at that April 15, 2019, meeting in Orlando that FDEP mentioned that the U.S. Environmental Protection Agency (EPA) is recommending raising the limits on some contaminants. As discussed in that meeting, actually raising such a limit is a policy decision. Considering the sad state of Florida’s waters, with cyanobacteria on the coasts and algae blooms in springs and sewage in rivers inland, raising any limits would be a bad idea, so please don’t do it.

Finally, I would like to compliment FDEP, SRWMD, and FDOH for their outstanding current work in water quality monitoring. These are merely a few suggestions for improvements, to make current and additional monitoring even more useful to conserving and improving the waters of the State of Florida, while not raising any pollution limits.

For the rivers and the aquifer,
John S. Quarterman,
Suwannee RIVERKEEPER®