Apparently some people in Albany, GA and Dunnellon, FL were surprised when Sabal Trail a week ago sent FERC “Notice of Commencement of Construction – Phase II Sabal Trail Project Facilities”, which means for the compressor stations in those two locations. But that notice was merely that “bona fide construction activities commenced on May 29, 2019.” FERC rubberstamped Phase II back in January, and Sabal Trail has been reporting on site clearing, gravelling, etc. for months. 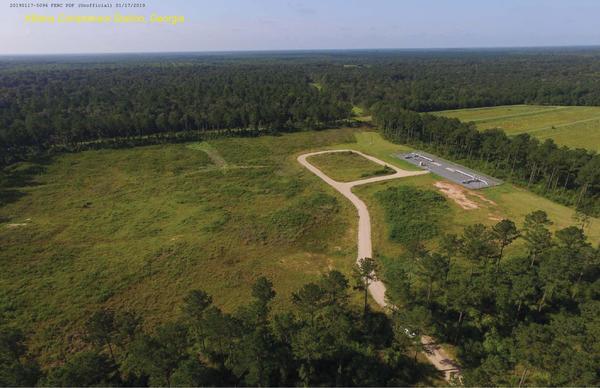 Meanwhile, Sabal Trail still can’t keep the gas flowing through its stranded asset pipelines. There never was any “need” for that gas in Florida, where Florida Power & Light (FPL)’s customers are stuck with the $4 billion construction bill. While FPL’s parent NextEra Energy never mentions Sabal Trail any more. NextEra brags instead about being a world leader in solar and wind energy.

When John Peconom of the Federal Energy Regulatory Commission (FERC) inked that rubberstamp back in January, the schedule was to start construction in May, of the Albany, Dougherty County, GA and Dunnellon, Marion County, FL compressor stations. Apparently meaning “bona fide” construction, not counting land clearing, driveways, gravel on the site, etc., because they’ve been doing that all along. 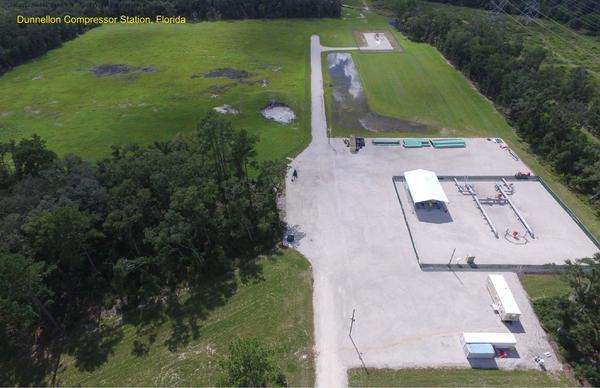 That was even before FERC in February rubberstamped the last bit of Phase I, which was the Suwannee M&R Station, the one that connects to Kinder Morgan (KMI)’s Florida Gas Transmission (FGT) Jacksonville Expansion Project (JEP) through Columbia, Union, and Baker Counties and on to Jacksonville, where there just happen to be at least two liquid natural gas (LNG) operations already operating, and another still in FERC permitting.

Since then, Sabal Trail sent a Phase II status report on April 26, 2019, saying nobody had complained, with pictures of the compressor station sites.

Crews began construction of a temporary retention pond and setup of the material laydown area at the Albany Compressor Station site on March 6, 2019.

Crews began setup of the material laydown area at the Dunnellon Compressor Station site on March 6, 2019. 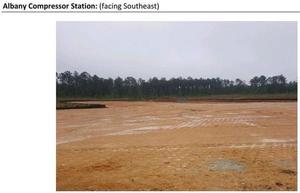 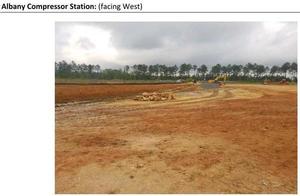 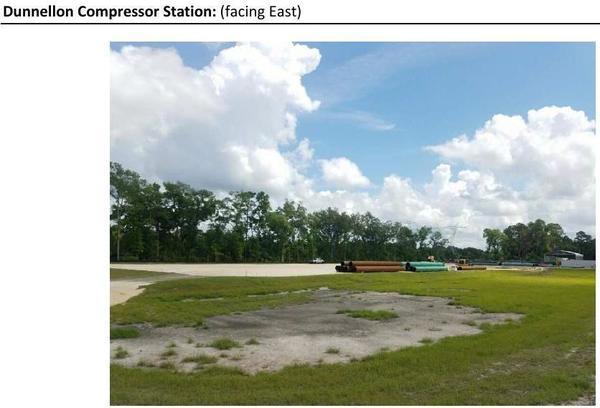 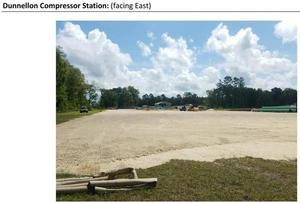 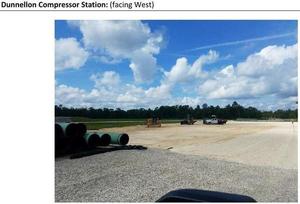 The May 21, 2019, monthly status report also said nobody had complained, and 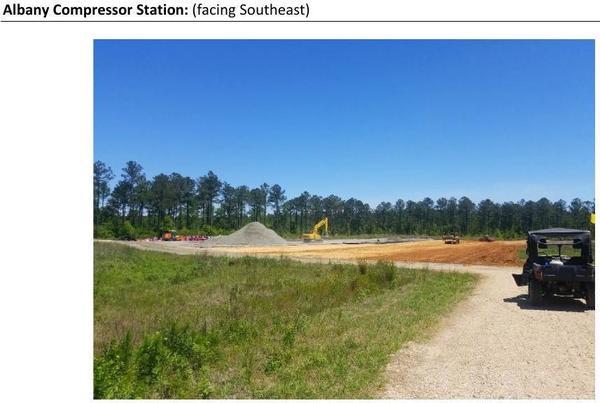 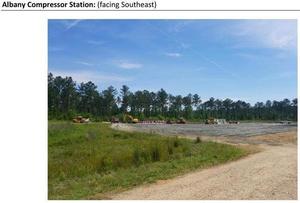 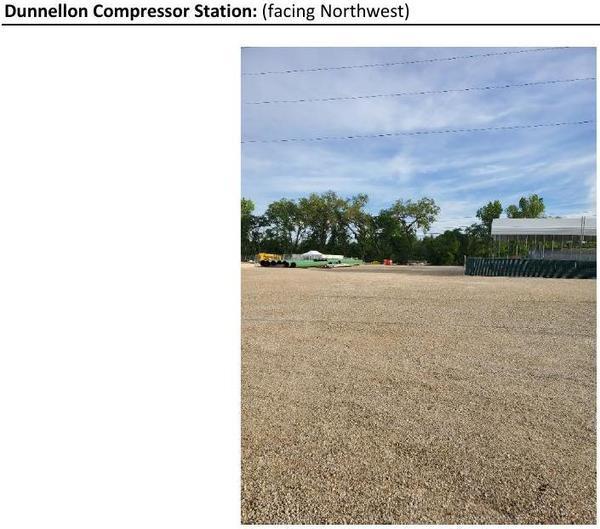 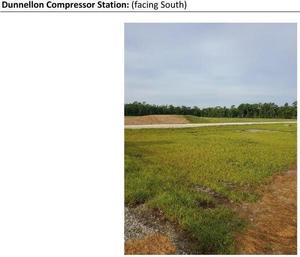 As you can see, Sabal Trail is barely shipping half its stated capacity much of the time. Yet it can get up to very near capacity, as it did at the beginning of this month. So why does Sabal Trail need two more compressor stations?

Sabal Trail hardly ever gets up to even half at the end of its line at the Reunion compressor station south of Orlando, where it connects with Florida Southeast Connection (FSC), all the way to the Atlantic coast of Florida at Riviera Beach. I would guess this is because much of the gas is going to Duke’s gas power plant in Crystal River. Which would mean it’s not feeding much gas to the Mouse’s power plants at Orlando, nor to FPL’s fabled “clean energy” plant at Riviera Beach. Once again, why does Sabal Trail need two more compressor stations?

As we knew all along, there is no real demand for Sabal Trail’s gas.

FPL, whose customers are stuck with the $4 billion bill for Sabal Trail construction, is building 74.5 megawatt solar farms all over Florida.

FPL’s corporate parent, NextEra Energy, bills itself as “World’s Largest Producer of Wind and Solar Energy”, with a picture of an huge wind turbine on its front web page, and flashy solar panel graphics at its “Learn More” link.

Sabal Trail is burying stranded assets in the ground. Assets that leak, like Sabal Trail already did in Suwannee County last September (and didn’t even bother to tell the state of Florida for a week). PHMSA and FERC so far have not even bothered to answer the WWALS complaint about that.

Gas that explodes, like Spectra Energy pipelines have so often in the past, and like gas from another pipeline did when it blew up a coffeeshop in Homerville, GA last fall, sending three women to the hospital with third-degree burns.

But FERC does have time to rubberstamp every Sabal Trail construction request within a week.

Where does all this gas go?

Sabal Trail’s own map from its Link System Informational Postings. 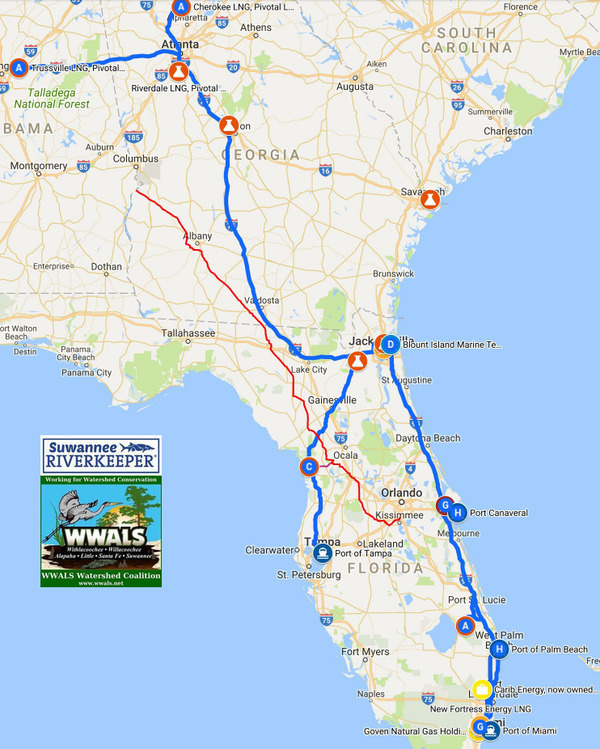 WWALS is still preparing a lawsuit against FERC about LNG export. You can help.