Update 2019-11-07: This blog post published as an op-ed in the Charlton County Herald, October 9, 2019, as Convenience of private profit is no excuse to risk Okefenokee. 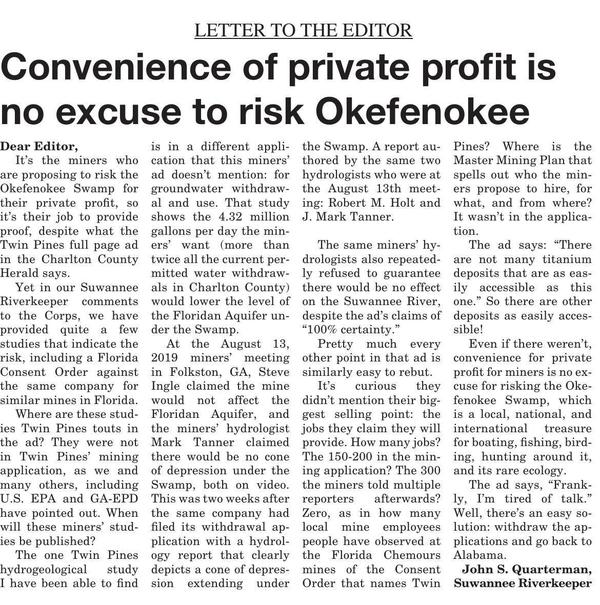 It’s the miners who are proposing to risk the Okefenokee Swamp for their private profit, so it’s their job to provide proof, despite what the Twin Pines full page ad in the Charlton County Herald says. Alex Kearns has already made this point for St. Marys Earthkeepers in a letter to the editor. You can comment on the newspaper’s website on that one, or you can send one, too, to: editor@charltonherald.com. 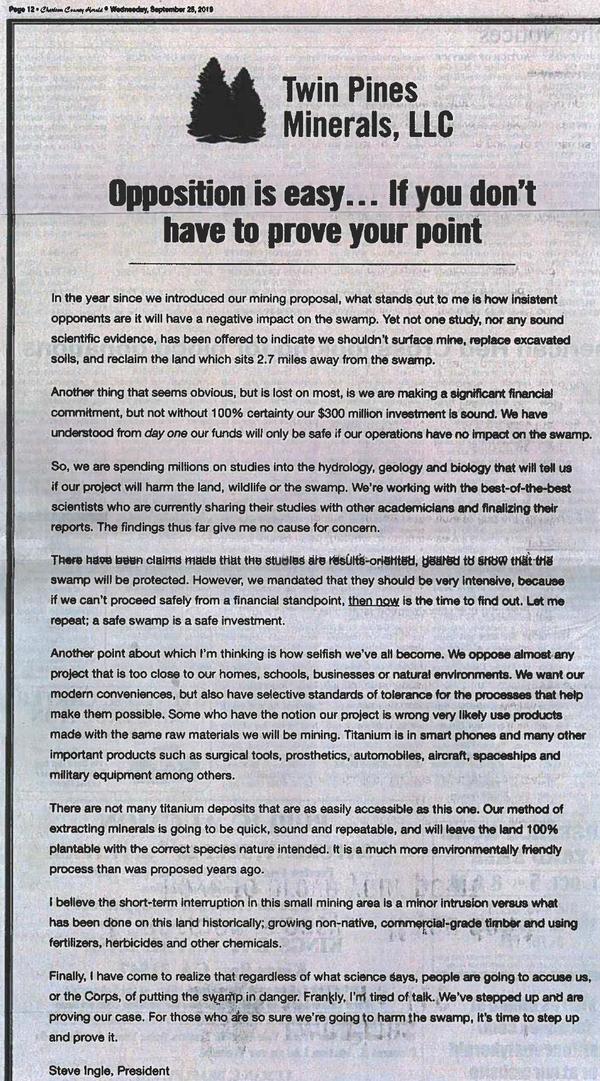 Yet in our Suwannee Riverkeeper comments to the Corps, we have provided quite a few studies that indicate the risk, including a Florida Consent Order against the same company for similar mines in Florida.

Where are these studies Twin Pines touts in the ad? They were not in Twin Pines’ mining application, as we and many others, including U.S. EPA and GA-EPD have pointed out. When will these miners’ studies be published?

The one Twin Pines hydrogeological study I have been able to find is in a different application that this miners’ ad doesn’t mention: for groundwater withdrawal and use. That study shows the 4.32 million gallons per day the miners’ want (more than twice all the current permitted water withdrawals in Charlton County) would lower the level of the Floridan Aquifer under the Swamp. 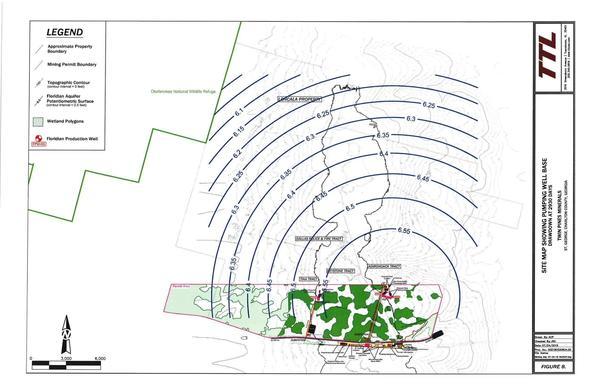 At the August 13, 2019 miners’ meeting in Folkston, GA, Steve Ingle claimed the mine would not affect the Floridan Aquifer, and the miners’ hydrologist Mark Tanner claimed there would be no cone of depression under the Swamp, both on video. This was two weeks after the same company had filed its withdrawal application with a hydrology report that clearly depicts a cone of depression extending under the Swamp. A report authored by the same two hydrologists who were at the August 13th meeting: Robert M. Holt and J. Mark Tanner.

The same miners’ hydrologists also repeatedly refused to guarantee there would be no effect on the Suwannee River, despite the ad’s claims of “100% certainty.”

Pretty much every other point in that ad is similarly easily rebuttable.

It’s curious they didn’t mention their biggest selling point: the jobs they claim they will provide. How many jobs? The 150-200 in the mining application? The 300 the miners told multiple reporters afterwards? Zero, as in how many local mine employees people have observed at the Florida Chemours mines of the Consent Order that names Twin Pines? Where is the Master Mining Plan that spells out who the miners propose to hire, for what, and from where? It wasn’t in the application.

Even if there weren’t, convenience for private profit for miners is no excuse for risking the Okefenokee Swamp, which is a local, national, and international treasure for boating, fishing, birding, hunting around it, and its rare ecology.

The ad says, “Frankly, I’m tired of talk.” Well, there’s an easy solution: withdraw the applications and go back to Alabama.

Text of the Miners’ Ad

Twin Pines Minerals, LLC
Opposition is easy… If you don’t
have to prove your point

In the year since we introduced our mining proposal, what stands out to me is how insistent opponents are it will have a negative impact on the swamp. Yet not one study, nor any sound scientific evidence, has been offered to indicate we shouldn’t surface mine, replace excavated soils, and reclaim the land which sits 2.7 miles away from the swamp.

Another thing that seems obvious, but is lost on most, is we are making a significant financial commitment, but not without 100% certainty our $300 million investment is sound. We have understood from day one our funds will only be safe if our operations have no impact on the swamp.

So, we are spending millions on studies into the hydrology, geology and biology that will tell us if our project will harm the land, wildlife or the swamp. We’re working with the best-of-the-best scientists who are currently sharing their studies with other academicians and finalizing their reports. The findings thus far give me no cause for concern.

There have been claims made that the studies are results-oriented, geared to show that the swamp will be protected. However, we mandated that they should be very intensive, because if we can’t proceed safely from a financial standpoint, then now is the time to find out. Let me repeat; a safe swamp is a safe investment.

Another point about which I’m thinking is how selfish we’ve all become. We oppose almost any project that is too close to our homes, schools, businesses or natural environments. We want our modern conveniences, but also have selective standards of tolerance for the processes that help make them possible, Some who have the notion our project is wrong very likely use products made with the same raw materials we will be mining. Titanium is in smart phones and many other important products such as surgical tools, prosthetics, automobiles, aircraft, spaceships and military equipment among others.

There are not many titanium deposits that are as easily accessible as this one. Our method of extracting minerals is going to be quick, sound and repeatable, and will eave the land 100% plantable with the correct species nature intended. It is a much more environmentally friendly process than was proposed years ago.

I believe the short-term interruption in this small mining area is a minor intrusion versus what has been done on this land historically; growing non-native, sorenyie are timber and using fertilizers, herbicides and other chemicals.

Finally, I have come to realize that regardless of what science says, people are going to accuse us, or the Corps, of putting the swamp in danger. Frankly, I’m tired of talk. We’ve stepped up and are proving our case. For those who are so sure we’re going to harm the swamp, it’s time to step up and prove it.