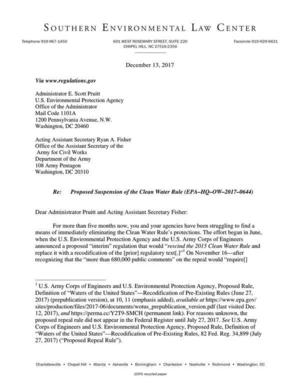 Much of that letter could as easily apply to today’s foregone vote to eliminate the FCC’s net neutrality rule. FCC Chairman Ajit Pai’s “‘unalterably closed’” views should have been enough for him to recuse himself. The three FCC Commissioners for the elimination of net neutrality made it clear they were not paying attention to the millions of public comments, despite requirements of the Administrative Procedure Act to do so. Chairman Pai with perhaps unintentional irony even argued that there was no need to hold public hearings since far more people commented online, which of course is only possible through an open Internet. Nevermind that the FCC appears to be ignoring those comments.

Similarly, the EPA does not seem to be paying attention to the “more than 680,000 public comments” on the Clean Water Rule repeal beyond taking only six days to come up with a two year delay in implementation of that rule.

The SELC letter to the EPA even cites two cases against the FCC when it says: END_OF_DOCUMENT_TOKEN_TO_BE_REPLACED