It’s time for more people and organizations, especially Congress members, to ask the Corps for a Supplemental Environmental Impact Statement, after Sabal Trail side-stepped many of the questions 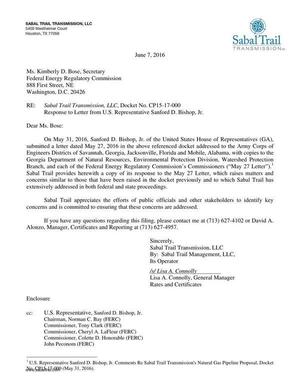 in a 130-page claim that it had already addressed every recent point from U.S. Rep. Sanford Bishop GA-02, WWALS Watershed Coalition, Flint Riverkeeper, and Dennis Price P.G. in recent letters to the U.S. Army Corps of Engineers. If karst concerns alone were enough to move Sabal Trail off of the Withlacoochee River in Florida, and the Itchetucknee River, and to move it to a different crossing for the Santa Fe River, they should be enough to move it off the Suwannee River, where the conditions are quite similar.

In case anybody wondered whether Sabal Trail is watching the web for anything posted by its opponents, note where Sabal Trail said in its included 6 June 2016 letter to Mark R. Evans of the Corps that it first saw Sanford Bishop’s letter: END_OF_DOCUMENT_TOKEN_TO_BE_REPLACED