August 6th in Gainesville, you can join groups and individuals in Gainesville to defend water and property rights from the invading Sabal Trail fracked methane pipeline.

You can register for the conference here, and soon we’ll hear the location and times of day. All of Florida and south Georgia drinks from the Floridan Aquifer, and the Suwannee, Santa Fe, and other rivers with their springs such as Lime Run (depicted here) are gems that also bring in substantial tourism revenue to Florida.

While Sabal Trail only aims at the southwest corner of Alachua County, Gainesville is near the center of the proposed pipeline path of destruction and hazard in Florida. WWALS will be there, and we welcome many new groups to the pipeline opposition which is water conservation and protection of property rights.

The Sabal Trail Pipeline is a proposed 515-mile fracked-gas pipeline that will cut through Alabama, Georgia and Florida. Over 940 acres of wetlands will be impacted by the pipeline project. Approximately halt of this dangerous pipeline is slated to run trom the Georgia/Florida state line to Orlando, and will include three loud & destructive compressor stations along with several auxiliary pipelines. 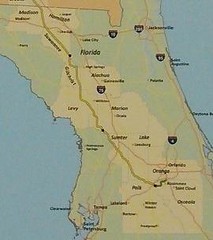 From speaking out at public meetings, to talking to their neighbors, to pressuring decision makers — community members in Florida have been organizing to protect their communities and stop the Sabal Trail Pipeline.

Although Sabal Trail has received some of the permits needed to move Forward, there is still time to stop the pipeline. The United States Army Corps of Engineers (Corps), the federal agency which oversees wetlands destruction permits, can stop this pipeline. The Corps is scheduled to make a final decision in 2016. Let’s make sure that they stop the Sabal Trail Pipeline!

On May 31st, 2015 a pipeline managed by Spectra Energy exploded under the Arkansas River. In 2014 alone, there have been 705 pipeline incidents with 19 fatalities. If this pipeline is allowed to move toward, Floridians and our waters will face these same threats.

North and central Florida are covered with pristine springs directly connected to the Floridian Aquifer system. This vast underground cave network is a gem right underneath our feet. Unfortunately, Sabal Trail has yet to address the potential For the high pressure pipeline to burst in or under the Floridian Aquifer — the main water supply For the entire state of Florida. Our waters, wetlands and communities are too important to risk for this dangerous pipeline.

WHAT CAN YOU DO?

For more into or to get involved, contact Johanna de Graffenreid at johanna@healthygulf.org! For additional GULF resources, visit HealthyGult.org/SabalTrail.

And of course you can support your local watershed organization, such as WWALS.