Much like the SRWMD Board listened to its attorneys and approved Nestlé Ginnie Springs water withdrawal near the Santa Fe River, SRWMD says it has no authority to stop the proposed new titanium mine Chemours wants near Starke, the fifth one in Florida, plus the two or three Chemours has in Georgia, plus the proposed Twin Pines Minerals mine near the Okefenokee Swamp, all on Trail Ridge, the north-south divide between the Suwannee River and St. Johns River Basins in Florida, and the dam that holds in the Okefenokee Swamp in Georgia.

The reporter has a good idea: SRWMD could charge Chemours for access through state property to its mine site.

Meanwhile, FDEP Mining and Mitigation has issued a Notice of Intent to Issue Environmental Resource Permit, which includes contact information for comments, and how you could file a request for a legal hearing.

You can also still ask Georgia officials to stop the other proposed mine far too near the Okefenokee Swamp:
https://wwals.net/?p=55092

Craig Pittman, Florida Phoenix, 20 May 2021, FL allowing mining of state-owned wetlands has a certain smell to it,

But the region also boasts a multitude of springs, lakes, creeks, and rivers, including the Santa Fe and the famous Suwannee, celebrated in our problematic state song. Overseeing these watery state assets is the Suwannee River Water Management District, which in 2015 spent $3.9 million to buy more than 2,000 acres of forest and swamp near Starke from the timber company Rayonier.

“It seemed like a good purchase,” Tom Mirti, the district’s deputy executive director, told me this week.

District officials figured they could use that land for a variety of environmentally beneficial projects, including creating a wildlife corridor for bears and other wide-ranging animals between the Ocala National Forest and the Osceola National Forest, he said.

Well, maybe SRWMD should not accept property unless mineral rights are included.

And how do they know they have no recourse? Did they try? Did they sic their famous attorneys on the case?

One of the permits the company needed was from Bradford County, itself.

County commissioners held a hearing on the permit a mere month after Chemours applied for it, giving scant notice to the public about this important agenda item. Nevertheless, word spread through the small town and the rural countryside, and people showed up like it was a pre-pandemic Black Friday sale on big-screen TVs.

“The Bradford County Courthouse’s commission hall was packed with concerned citizens for the meeting and decision,” WUFT-FM reported. “The line outside the hall wrapped around the door and through the hallway, leading some to criticize that not everyone could hear or see the meeting fairly.” 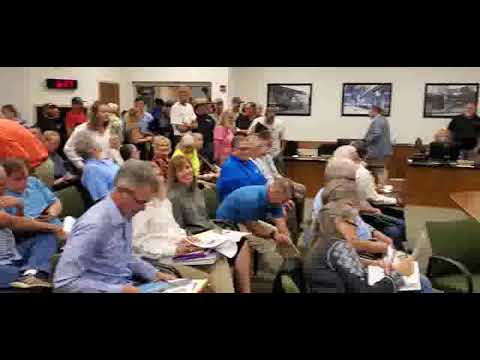 Paul Still was there. He stood up to read a letter outlining all the deficiencies in the proposed permit, in particular how it failed to protect the area’s economically important environment. 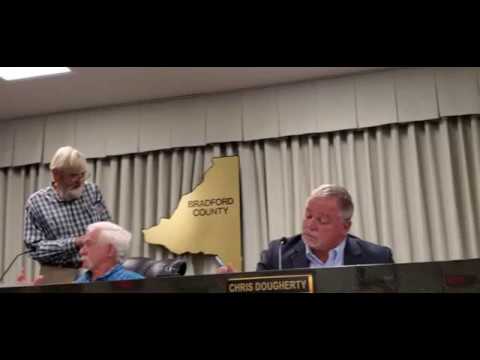 But the commissioners okayed the mining permit by a vote of 3-2. According to Still, the basic arguments were, “We need jobs no matter what!” versus “Hey, this is moving too fast, slow down!” I guess this is one instance when being a speed demon won the day, regardless of whether it was the right thing to do. 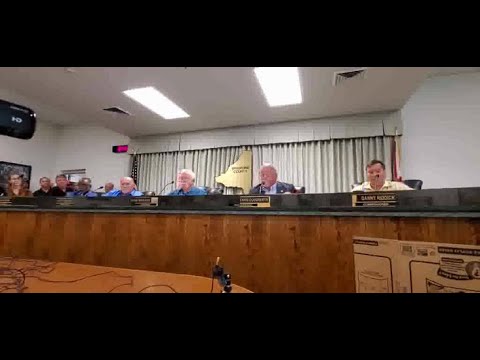 Earlier this month, the DEP published a small notice in the Bradford County Telegraph announcing its intent to approve another permit that Chemours needs — in spite of the company’s record.

According to the notice, Chemours intends to rip up 740 acres of the supposedly protected swamps and marshes. Bear in mind that the water management district bought this land to protect the flood plain, not tear it apart. Yet, here’s another state agency saying it’s okay to do just that.

To make up for all that destruction, the notice said, the company is promising to create 710 acres of new wetlands and “enhance” another 136 acres. But experts have found that creating man-made wetlands rarely if ever works — they tend to turn into open ponds. Meanwhile, “enhancing” wetlands generally means yanking out any exotic plants, which doesn’t make the wetland function any better.

“The project is not expected to cause or contribute to violations of water quality standards,” the DEP notice says. That’s one of those sentences that makes you go “hmmm, really?” Sort of like hearing someone say, “Kim Kardashian is actually a shy and retiring sort.”

If I were the Suwannee River water district folks, I know what I’d do. I would copy what the state does with people like me who rack up lots of speeding tickets.

I would tell the Chemours folks that they’re certainly entitled to go in and exercise their right to mine that taxpayer-owned property — but they have to pay for crossing the rest of the state’s land to get to it, and the price will be pretty high based on their repeated infractions.

Based on the Chemours record, I would set the toll pretty high, maybe around $2 million, and raise it even higher if they mess up, even on something minor. If nothing else, it would help pay for the clean-up should Chemours mess up this site too.

Obviously, if it dumps a lot of pollution here, the company would forfeit its right to mine anywhere else — just like someone who racks up too many speeding tickets forfeits the right to drive.

I ran this idea past Tony Mirti, but he told me he didn’t think it was legal.

Ahem, I like Tom Mirti, but he is not an attorney.

So maybe we should encourage our state legislators — who want all the voters to think they’re friends of nature — to pass a law making it legal.

Maybe we can persuade them to take such a bold step by promising to name a cologne after them: “This is what the Florida Legislature smells like.” Of course, that might not sell too well, because usually it smells too much like a giant size bottle of Hubris.

The FDEP email about their Notice of Intent says:

The Florida Department of Environmental Protection, Mining & Mitigation Program gives notice of its intent to issue an environmental resource permit. Please click the link below to access the final order.

If you have questions regarding this project, please contact Janelle Strong at 850-245-7549 or via email at MiningAndMitigation@FloridaDEP.gov.

Or if you don’t want to deal with Oculus, the documents are on the WWALS website.

Chemours titanium mines the new one proposed near Starke is the last at the bottom of the row,
on the WWALS map of the Suwannee River Wilderness Trail.

In the middle of that line of mines is the other proposed titanium mine, the one by Twin Pines Minerals far too near the Okefenokee Swamp. Don’t forget you can also still ask the Georgia Environmental Protection Division and Georgia elected and appointed officials to stop that mine:
https://wwals.net/?p=55092