Which it remind us how valuable our precious rivers are to us. Because we use that clean water to drink, shower, cooking.etc, So we can live, no water mean their no human life, no wildlife or plants habitat.

The company behind the massive chemical spill that made tap water unsafe for more than 300,000 West Virginians has has filed for bankruptcy, according to documents obtained by The Huffington Post. According to bankruptcy filings, Freedom Industries, wholly owned by Chemstream Holdings Inc., filed for Chapter 11 bankruptcy on Friday. Freedom Industries owns the storage facility responsible for leaking up to 7,500 gallons of 4-methylcyclohexane methanol (a coal-cleaning chemical also known as crude MCHM) into West Virginia’s Elk River. Hundreds of thousands of people in nine counties were given orders not to use water for bathing or drinking for days as the company scrambled to clean up, exposing disturbing vulnerabilities in the water supply and a lack of data about hazardous chemicals and where they’re stored. A second site owned by the company was also cited for safety violations shortly after the spill. A representative for Freedom Industries told HuffPost that the company would not be commenting on the bankruptcy. Despite the filings, the U.S. attorney’s office in West Virginia told HuffPost that the new development would not have any effect on its ongoing investigation into the leak. Freedom Industries currently owes $3.66 million to its top 20 creditors, including more than $2.4 million in unpaid taxes to the IRS. -CLG
January 13th 2014 Statement of American Rivers’ President Bob Irvin:   “We support the communities that depend on the Elk River for their drinking water and call upon all citizens, industry, and state officials to protect this vital resource. The recent spill of coal-processing chemicals into the Elk River, contaminating the drinking water supply for hundreds of thousands of West Virginians, brings our reliance on clean, healthy rivers into sharp focus. The Elk River, like all waterways in West Virginia, is designated for use as a source of public drinking water. The Freedom Industries spill clearly shows the importance and need for upholding and enforcing laws that protect clean drinking water and public health. Preventing future spills of this kind is one reason American Rivers advocates for strong legal protections for our rivers provided by laws such as the federal Clean Water Act and related state laws.” This map shows the status of water safety in the Kanawha Valley on January 13, 2014 at 5:34 pm after the chemical spill into the Elk River About American Rivers American Rivers protects wild rivers, restores damaged rivers, and conserves clean water for people and nature. Since 1973, American Rivers has protected and restored more than 150,000 miles of rivers through advocacy efforts, on-the-ground projects, and an annual America’s Most Endangered Rivers® campaign. Headquartered in Washington, DC, American Rivers has offices across the country and more than 200,000 members, supporters, and volunteers. -CLG

As we could have guessed from the aquifer storage meeting last November, the water grab to ship to Atlanta HB 213 that failed in the Georgia House last year is back on the table this year, and it’s still a bad idea, especially with the Flint River #2 on American Rivers’ Most Endangered Rivers list.

The controversial provision in SB 213 would authorize state investment in “projects to augment stream flows” and would then authorize the director to prohibit downstream property owners with permits from withdrawing “augmented” water (which is undefined). The duration of the prohibition on water withdrawals is undefined, and the bill is structured to allow private consulting companies …

Meet at the boat ramp/parking lot on the left just before you get to Statenville heading east on Hwy 94 at 1:30. Boat launch is at 2. We will paddle upstream for 30 to 45 min. and then float back down. The river will likely be up, so it should be a work out. 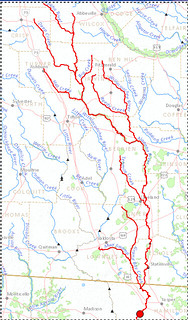 The river water temperature is currently 50 degrees Fahrenheit, so dress warmly. The Alapaha River at Statenville is currently at 9 feet and rising, which is well above the level recommended by Brown’s Guide for this river.

Jungle-like in its remoteness and luxurious with exotic vegetation, the dark reddish-brown waters of the Alapaha wind through a swampy wonderland teeming with wildlife. Signs of habitation are rare along the river’s course; only a few isolated cabins intrude on the remote tranquility.

Legal access to rivers and other waterways in Georgia is unclear, and federal law may trump state law anyway.

Dan Washburn wrote some time in 2000 for The Times of Gainesville, GA, Access denied: Owners, users spar over land, which applies as much to the rest of Georgia as to north Georgia:

The conflict in North Georgia is a confusing amalgam of the old and the new, of state and federal laws, of mountains and streams. Its cast of characters includes landowners and land managers, bureaucrats and businessmen, environmentalists and adventure seekers — and lawyers, plenty of lawyers.

And much of it involves a splitting of legal and philosophical hairs that would make Mother Nature and Uncle Sam cringe.

Nowhere has this tug-of-war played out more dramatically than on Georgia’s rivers and streams, where the dispute over what is public and what is private is as murky as the Chattahoochee River after a hard rain.

There’s a lot more in the article, including this box:

Getting to the water an issue for paddlers, anglers alike

END_OF_DOCUMENT_TOKEN_TO_BE_REPLACED 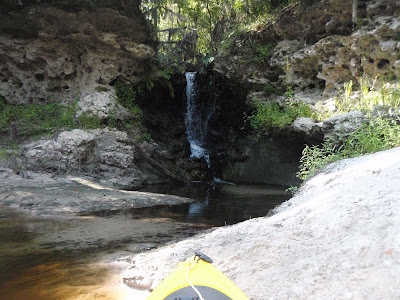 Proposed for the WWALS January 2014 outing: the river most people know nothing about, from the convergence of Mud Swamp Creek where Grand Bay Creek forms the border between Lowndes County and Echols County in Georgia east of Valdosta, about 14 miles through Echols County between Lake Park and Statenville, to the Alapaha River in Hamilton County, Florida east of Jennings: the Alapahoochee River.

It has a waterfall, limestone caves, and boat ramps, all pictured by South Georgia Kayak Fishing 3 September 2011 in Alapahoochee convergence at Alapaha River – Jennings, FL. 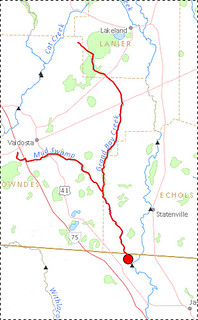 This stretch of Alapahoochee River Grand Bay Canal) in Echols / Hamilton County is 4.5 miles long and is according to American Whitewater a class II section of whitewater.

They include a map.