Precedent agreements for 90+% of the pipeline’s capacity was FERC’s excuse for PennEast yesterday, the same as for Sabal Trail two years ago. Yet Sabal Trail apparently already lost 4/7 of its supposedly solid customer base and is not even shipping any gas. Even a dissenting FERC Commissioner spelled out that such shaky “need” does not justify environmental damage nor invasion of property rights through federal eminent domain. Sure, Commissioner LaFleur, we should trust PennEast with the Delaware River like FERC told us to trust Sabal “Sinkhole” Trail about the Suwannee River?

On New Year’s Day Sabal Trail removed Duke Energy Florida (DEF) from its customer index. On November 14, 2017, Sabal Trail’s gas flow dropped to zero, and Sabal Trail increased its Uncommitted Capacity by 300,000 Dekatherms per day, exactly the same as DEF formerly contracted for, and thirty days after DEF’s initial contract expired. That leaves FPL as Sabal Trail’s only customer, with its 400,000 DTH/day. Four sevenths of of 93% is only about 53%, which is not even the 75% Commissioner Richard Glick also mentioned in in his Friday dissent from the 4:1 FERC rubberstamp of the PennEast pipeline, which also happens to be a feeder for Sabal Trail through Transco. Meanwhile, during freezing weather in Florida, Sabal Trail shipped zero gas for much of November and January (and hardly any in December): how is that need? 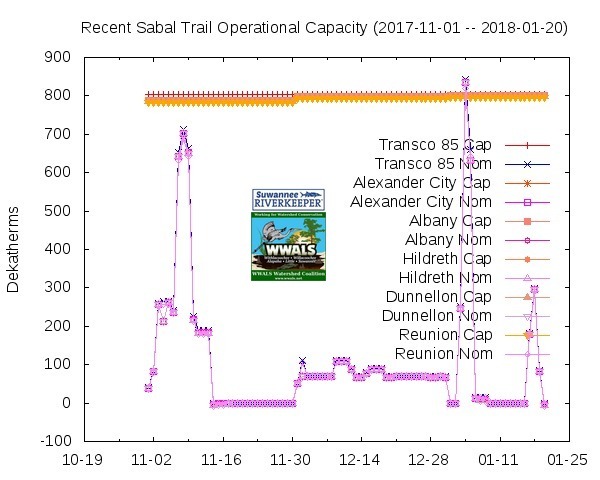 “I respectfully dissent from today’s order because I believe that the record in this proceeding fails to demonstrate that the PennEast Project satisfies the requirements for a certificate of public convenience and necessity under the Natural Gas Act. Section 7 of the Natural Gas Act requires that, before issuing a certificate for new pipeline construction, the Commission find both a need for the pipeline and that, on balance, the pipeline’s benefits outweigh its harms.1 I disagree with the Commission’s conclusion that the PennEast Project meets these standards.

Here’s what Commissioner Glick wrote about that 75%:

“In today’s order, the Commission relies exclusively on the existence of precedent agreements with shippers to conclude that the PennEast Project is needed.2 Pursuant to these agreements, PennEast’s affiliates hold more than 75 percent of the pipeline’s subscribed capacity.3 While I agree that precedent and service agreements are one of several measures for assessing the market demand for a pipeline,4 contracts among affiliates may be less probative of that need because they are not necessarily the result of an arms-length negotiation.5 By itself, the existence of precedent agreements that are in significant part between the pipeline developer and its affiliates is insufficient to carry the developer’s burden to show that the pipeline is needed.

2 PennEast Pipeline Company, LLC, 162 FERC ¶ 61,053, at P 27 (2018) (explaining that “it is current Commission policy to not look beyond precedent or service agreements to make judgments about the needs of individual shippers”); id. P 29 (“Where, as here, it is demonstrated that specific shippers have entered into precedent agreements for project service, the Commission places substantial reliance on those agreement to find that the project is needed.”).

4 Certification of New Interstate Natural Gas Pipeline Facilities, 88 FERC ¶ 61,227, 61,747 (1999) (Certificate Policy Statement) (“[T]he Commission will consider all relevant factors reflecting on the need for the project. These might include, but would not be limited to, precedent agreements, demand projections, potential cost savings to consumers, or a comparison of projected demand with the amount of capacity currently serving the market.”).

“Under these circumstances, I believe that the Commission must consider additional evidence regarding the need for the pipeline. As the Commission explained in the Certificate Policy Statement, this additional evidence might include, among other things, projections of the demand for natural gas, analyses of the available pipeline capacity, and an assessment of the cost savings that the proposed pipeline would provide to consumers.6 The Commission, however, does not rely on any such evidence in finding that there is a need for the PennEast Project.7 Accordingly, I do not believe that the Commission’s order properly concludes that the PennEast Project is needed.

7 Indeed, the Commission concludes that “the fact that 6 of the 12 shippers on the PennEast Project are affiliated with the project’s sponsors does not require the Commission to look behind the precedent agreements to evaluate project need.” PennEast Pipeline Company, LLC, 162 FERC ¶ 61,053 at P 33.

While Commissioner Glick is right that FERC did not properly conclude that PennEast is needed, he failed to mention that FERC should compare a natural gas pipeline company’s alleged “need” against solar power, which is faster, cheaper, far safer, and does not require eminent domain.

“In addition to determining the need for a pipeline, the Natural Gas Act requires the Commission to find that, on balance, the pipeline’s benefits outweigh its harms. This includes weighing the risk of harm to the environment, landowners, and communities, as well as public safety more generally.8 And where, as in this proceeding, there is limited evidence of the need for the proposed project, it is incumbent on the Commission to engage in an especially searching review of the project’s potential harms to ensure that the project is in fact in the public interest. In this case, PennEast’s certificate application lacks evidence that I believe is important to making the public interest determination.9

8 As the United States Court of Appeals for the District of Columbia Circuit has explained, “[t]he broad public interest standards in the Commission’s enabling legislation are limited to ‘the purposes that Congress had in mind when it enacted this legislation.’” Pub. Utils. Comm’n of Cal. v. FERC, 900 F.2d 269, 281 (D.C. Cir. 1990) (quoting NAACP v. FERC, 425 U.S. 662, 670 (1976)). The Court explained that, for the Natural Gas Act, these purposes include “ ‘encourag[ing] the orderly development of plentiful supplies of . . . natural gas at reasonable prices’” as well as “ ‘conservation, environmental, and antitrust issues.’” Id. (quoting NAACP, 425 U.S. at 670 n.6).

9 For instance, 68 percent of the project alignment in New Jersey has yet to be surveyed for the existence of historic and cultural resources. PennEast Pipeline Company, LLC, 162 FERC ¶ 61,053 at P 172. In addition, PennEast has not yet completed the geotechnical borings work needed to ensure that the environmental impacts of planned horizontal directional drilling will be adequately minimized. Id. P 120.

11 See, e.g., Walker v. Gateway Pipeline Co., 601 So. 2d 970, 975 (Ala. 1992) (explaining that section 7(h) of the Natural Gas Act addresses eminent domain needed for the “actual construction of facilities, not entries that may take place prior to such construction and in preparation for acquiring a certificate of public convenience and necessity from the FERC”).

End run around the process

Glick apparently assumes that FERC would eventually “confirm that the pipeline is in the public interest,“ but the speed of this rubberstamp for PennEast was too fast even for this recent FERC appointee.

“I recognize that part of the reason that the record in this proceeding is incomplete is that landowners have denied PennEast access to their land for the purpose of conducting the necessary studies and assessments. However, the question whether landowners should be required to provide pipeline developers with access to their property for the purpose of determining whether it is suitable for a proposed pipeline is one that is and should be left to the states to decide. The Commission should not use the pipeline certification process as an end run around states and landowners that choose not to grant access to their property before a certificate is issued.12

How many landowners in Georgia and Florida objected to federal eminent domain from FERC’s certificate for Sabal Trail being used to force entry to their land? Many.

Well, now one of five FERC Commissioners actually voted no partly because of property rights.

“For these reasons, I respectfully dissent.”

That’s great, but with only one out of four dissenting, it’s also just lipstick on a pipeline process pig.

I have carefully considered the environmental impacts of the PennEast Project, and agree with the order’s determination that, while the Project will result in some adverse environmental impacts, the environmental conditions imposed in today’s order will ensure that such impacts are reduced to acceptable levels. I do share the concerns of my colleagues that the record reflects a significant number of environmental surveys that are incomplete due to lack of access to landowner property. I am persuaded, however, that Commission staff has developed a sufficient record to adequately evaluate the environmental impacts resulting from the PennEast Project.2 Moreover, today’s order imposes a number of environmental conditions which are intended to specifically allow the Commission and Commission staff to carefully monitor PennEast’s ongoing compliance obligations, particularly related to the completion of those surveys, and any necessary avoidance, minimization, and mitigation measures that may be needed.

2 The order explains that the Commission relied upon “PennEast’s application and supplements, as well as information developed through Commission staff’s data requests, field investigations, the scoping process, literature research, alternative analyses, and contacts with federal, state, and local agencies, as well as with individual members of the public.”

Yes, I’m sure FERC held Scoping Meetings. I’d bet 90+% of the comments from the public were against the pipeline, just like for Sabal Trail, yet Commissioner LaFleur didn’t bother to mention that, nor the many protests, including at FERC during the meeting where she just voted, nor massive opposition by Sierra Club, Delaware Riverkeeper, and many others.

FERC claimed Sabal Trail would monitor the Outstanding Water of Florida, the Suwannee River, but sinkholes and frac-outs happened anyway, and last October we found a sinkhole in Suwannee River State Park within 60 feet of the pipeline that neither Sabal Trail nor FERC have said they even knew about, much less did anything to fix. See also The Three Stooges Greatest Fails at Dunnellon, in which we learned that not one state or federal agency was monitoring nor was willing to do anything about hazardous odorant leaks from Sabal Trail: not FERC, not PHMSA, not OSHA, not FDEP. About which Sabal Trail only revealed information grudgingly when required to by Marion County, Florida, Emergency Management, or, in one case, by OSHA after WWALS insisted OSHA check; OSHA still did nothing to stop the leaks.

Meanwhile, Sabal Trail can’t even keep the gas on. So why should anyone trust a pipeline company? 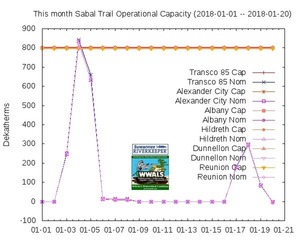 Commissioner Chatterjee wants landowners to “cooperate” with the pipeline company

Recent appointee (and briefly Chairman) Neil Chatterjee’s tacked-on concurrence statement says pretty much the same thing as quoted above from LaFleur’s, plus:

But I would like to encourage pipeline companies and landowners to work with the Commission to maximize engagement and minimize the impacts on landowners going forward. I believe that a cooperative process leads to the best results for all stakeholders.

Sure, FERC is authorizing a private company to destroy your land without your consent, but you the landowners should cooperate now. Right.

Why tinker with a process if FERC doesn’t follow it anyway?

I strongly support Chairman McIntyre’s announcement that the Commission will undertake a generic proceeding to look broadly at our pipeline certificate policies. I believe this review should include both our needs determination and our environmental review of proposed projects. Today’s order highlights the issue of how pipeline developers engage with landowners, which I believe should also be explored in the upcoming generic proceeding.

Given that FERC does not even follow the current law nor its own current rules, as spelled out by WWALS and now concured by Glick (and to some extent by LaFleur and Chatterjee), how exactly is reviewing FERC’s policies going to help?

We need Congress to fix FERC

What we really need are enough new members of Congress to pass some laws turning FERC to the sun.