Hamilton County did due diligence by hiring a consultant to review the PCS phosphate mine’s record and permit applications. The Mericles and me were the only non-county non-PCS people who spoke, but the Planning and Zoning Board interacted quite a bit last night at the public hearings. Both the motions they passed recommended approval of the permits, but the second motion included taking into account the points raised by the public, such as better public access to permit materials and review of the mining company’s water quality data. 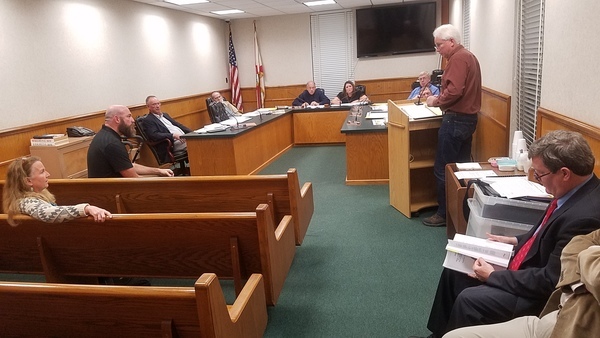 County Attorney Cliff Adams took notes throughout, and there was a sound recording.

The public consisted of WWALS members Chris and Deanna Mericle, there as local citizens and as the leaders of the North Florida Working Group, Suwannee-St. Johns Group of Sierra Club Florida, plus one other Hamilton County citizen, and Suwannee Riverkeeper John S. Quarterman.

Hired by the county to do the report: Attorney Scott Shirley of Ard, Shirley & Rudolph in Tallahassee, Gregory M. Hitz, P.G., with funds supplied by PCS, according to Deanna Mericle. 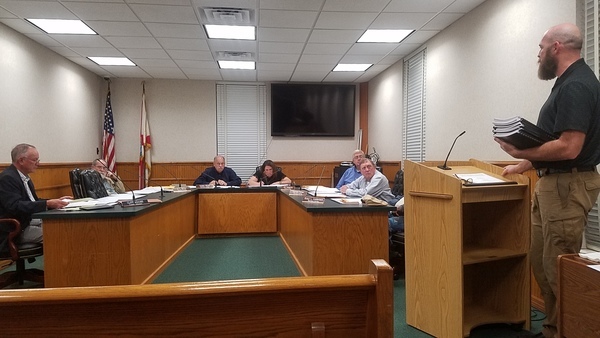 The second page of the slides says Gregory M. Hitz, P.G. also has degrees in geology, environmental science, and business administration. If he or Hamilton County does not make the slides and report public soon, WWALS will, by scanning it. 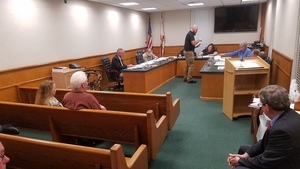 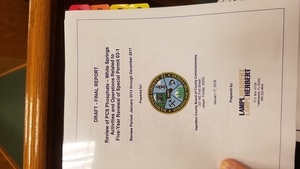 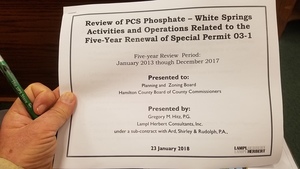 The slides and report contain much useful information, such as maps, a table regulatory permits and actions, including NPDES wastewater permits, and a table summarizing regulatory actions by EPA and FDEP. The most recent action was the 2014 EPA Consent Decree 14-707-BAJ-SCR PCS Phosphate Clean Air Act Settlement. According to EPA:

I believe Deanna’s questions included who was the Technical Review Committee that the consultant and PCS frequently referred to. According to County Attorney Cliff Adams, its county members include County Commissioner Randy Ogburn, County Coordinator Louie Goodin, and the County Attorney. He said its meetings were publicly announced. 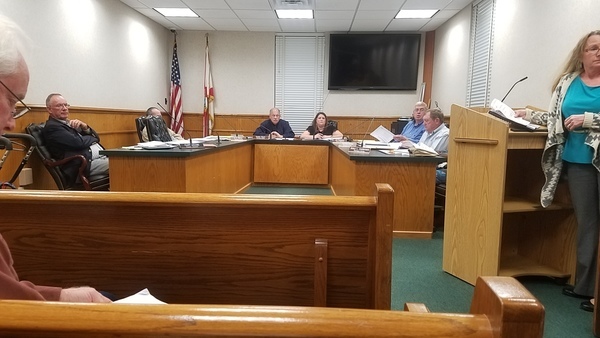 I asked what sort of water quality monitoring data did PCS have. Answer, from several PCS folks: much data, most of it in FDEP’s online Electronic Document Management System (OCULUS). They remarked that it was best to get an FDEP person on the phone to guide you through it (ain’t that the truth).

I asked whether it would be possible for some independent third party water quality monitoring at water ponds on the mine site. Answer: difficult due to the whole site being a hard hat area, and certification being required, but they would inquire.

I asked the Board members if any of them had seen the data in Oculus and reviewed violations and resultant actions before this meeting. They all shook their heads. Review of PCS water quality data is one of the recommendations in the consultant’s report. Maybe somebody from the county will look over that data before the BOCC votes on the permits. 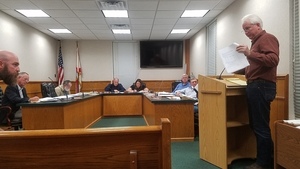 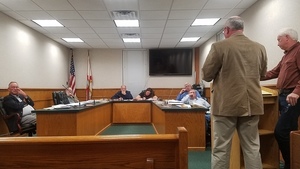 Chris Mericle detailed the long chain of requests he’d gone through trying to get a copy of the draft report, with little success. It was not clear when the Planning and Zoning Board had received it. Access to such materials was a recurring topic. Board Member Harrell Wynn suggested putting it on the county website. I said yes, please. They noted that was up to the Board of County Commissioners, but they would ask.

Two out of three gypstacks in Hamilton County are closed, including the one that had a sinkhole in 2005, but PCS is opening another. There was much discussion of what “closed” meant: lining underneath, cap on top to keep more water from going in, grass above that, but water still runs out from underneath, whether into the aquifer or not seems to depend. A Commissioner brought up radon. PCS claims it’s much lower than in central Florida, “under 9” and “less than 13 is safe”. What level is safe seems to depend on where (home air? water? gypstack) and who you ask.

Chris Mericle wanted to know what happens after the fifty years of the PCS reclamation plan? Answer: that would be up to future generations. There was discussion of uranium mine sites on native land in the southwest with the same but worse problem.

A recurring topic was the reports of permit actions that PCS had filed with the county over the years. They did it by telephone. They had already volunteered to do it in writing, when I asked the rhetorical question of what would someone get back if they filed a public records request for those reports? Board Member Harrell Tyree then asked PCS point blank, “Will you file reports in writing?” PCS rushed to say yes, yes, they would do that. County Attorney Cliff Adams made a note of that.

On the way to the meeting. 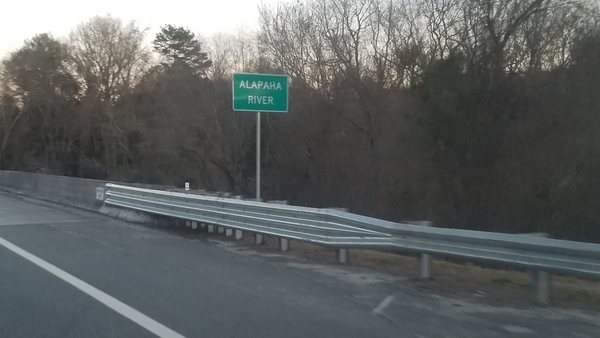 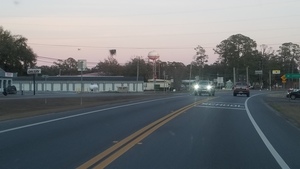 There was no direct mention of any potential expansion of PCS outside its current site, nor of PCS maybe processing materials from the proposed HPS&II mine in Union and Bradford Counties.