“Without the certificate,
they cannot operate.”
—John S. Quarterman
of WWALS

Protesters turned out in St. Pete last year, and now a reporter from Tampa posts an update on double-sad news for Sabal Trail (I’ve added links).

Carmella Guiol, Kate Bradshaw, Creative Loafing Tampa Bay, 15 Feb 2018, The experts were right: Troubles for the Sabal Trail pipeline: They warned us — correctly — about the pipeline’s dangers to the environment. ,

For years, environmentalists warned against constructing the Sabal Trail pipeline. Yet construction wore on, and the controversial natural gas conduit is functional — for now.

Photo: Terrence Smith. TOLD YA SO: In St. Petersburg, protesters railed against the controversial project in 2017.

The 515-mile pipeline snakes from Alabama to central Florida, and when it’s running, it brings natural gas (mined using the process of fracking) to power plants in the Sunshine State, where it generates energy that power companies sell to customers. The $3.5 billion project is a joint venture between Enbridge, NextEra Energy and Duke Energy Corporation, which make up the group Sabal Trail LLC.

The Sierra Club sued over that last one, but despite the pending litigation the pipeline went online last June. The lawsuit is now on the brink of taking down the pipeline, though, and an onslaught of problems resulting from the pipeline’s operation may threaten it as well.

In July and August of last year, Marion County residents reported leaks, although the company alleges the incidents were due to “minor mechanical issues on the above ground odorant equipment at the future compressor station site.”

Problems surfaced even during construction, when environmental advocates discovered drilling mud leaking into the Withlacoochee River in South Georgia in November 2016.

The leak resulted from a pilot hole Sabal Trail had drilled just beneath the riverbed, which environmentalists said not only could have harmed the watershed, but also could be a sign of environmental harm to come.

Then, in August, the U.S. Court of Appeals for the D.C. Circuit sided with the Sierra Club in its lawsuit seeking to block the pipeline. The court’s rationale? That the Federal Energy Regulatory Commission (FERC) hadn’t done its due diligence, failing to account for potential greenhouse gas emissions.

In a landmark decision (and a rare win for the environment), the judges ordered FERC to redo its environmental impact statement, given how “greenhouse-gas emissions are an indirect effect of authorizing this project, which FERC could reasonably foresee, and which the agency has legal authority to mitigate.”

But the pipeline was already up and running — and the pipeline’s operators, along with the feds, appealed.

To their likely chagrin, on Jan. 31 the appeals court denied that request. The court was set to revoke Sabal Trail’s certificate of public convenience, a document it is required to have, on Feb. 8.

“Without the certificate, they cannot operate,” says John Quarterman, president of the WWALS Watershed Coalition, a group that promotes stewardship of several watersheds in south Georgia.

Well, our rivers don’t stop because somebody drew a state line on the map: the Suwannee, Alapaha, and Withlacoochee (north) all flow into Florida, and we have many members in Florida all the way to the Gulf, including near where Sabal Trail dug under the Suwannee, the Santa Fe, and the Withlacoochee (south) Rivers, the last near that Dunnellon stink leak.

So it would be more accurate to say: “John S. Quarterman, Suwannee Riverkeeper and president of WWALS Watershed Coalition (WWALS), a group that promotes stewardship of the Suwannee River Basin watersheds in south Georgia and north Florida.”

Back to the excellent article:

But Feb. 8 came and went with no action on the issue, probably because the court was reviewing new information.

On Feb. 2, in a 25-page filing, the pipeline owners pleaded with FERC to expedite the emergency impact statement or issue temporary emergency permits, citing potential cost increases for customers and financial losses from having to temporarily shut down the pipeline.

Interestingly, their own FERC-required reports demonstrate inconsistencies in the pipeline’s nominated gas volume, or the volume that the pipeline company proposes to ship to its customers. Back in November, the pipeline’s gas volume was reduced to zero for a week and graphs show that its operational capacity has been at zero for most of 2018.

For that past week Sabal Trail has been ramping up gas, apparently pretending that it’s actually needed. 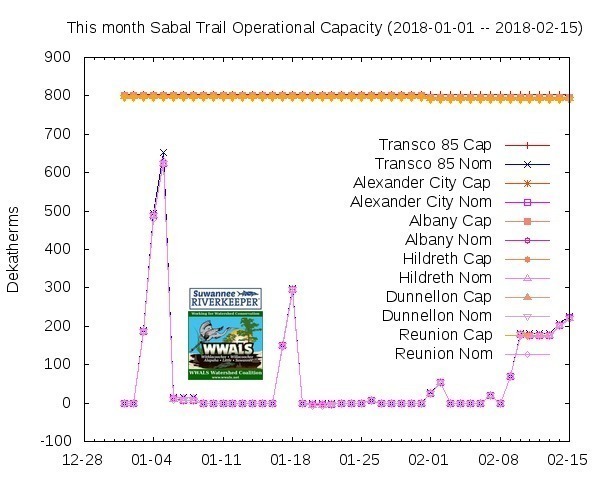 However, you can see by these graphs from Sabal Trail’s own FERC-required Informational postings that it’s ramped up many times before, and ramped right back down. 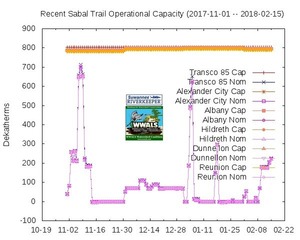 If Sabal Trail was actually needed, why was it zero in most of January and ramping up now that the weather’s very mild?

Back to the article.

With the clock ticking, FERC issued the updated statement three days later, on February 5. The statement claimed that the pipeline’s impact on carbon emissions was negligible, which environmentalists didn’t buy.

The article continues about Sabal Trail crying wolf to FERC and FERC echoing that cry to the DC Circuit Court, and then:

WWALS, along with the Sierra Club and a coalition of landowners, will file objections to that emergency request. In their opinion, the pipeline should be shut down as long as the project’s EIS is still under review. The D.C. Circuit has not yet responded to the last-minute request.

Well all three of us already did file objections with FERC: WWALS, landowners, and Sierra Club. Sierra Club and the landowners are parties to the DC Circuit Court case, so they will be filing with the Court, as well.

The Court did respond by delaying issuing its mandate.

The article quotes Attorney Eric Huber of Sierra Club about how the Court’s decision shhould be a no-brainer. It continues:

In the midst of all this, the Sabal Trail team got some more bad news.

On February 6, they received a letter from FERC alerting them to erosion likely caused by the project along a swath of Georgia farms, including one belonging to the world record-holder in soybean bushels per acre, Randy Dowdy. According to Quarterman, Dowdy warned Sabal Trail back in early 2016 to fix the terraces or risk erosion — and his warning was warranted. The area has since experienced heavy rainfalls that have resulted in mass amounts of topsoil getting washed into a nearby wetland, a permit violation in itself.

In its letter, FERC validates the farmers’ warnings and demands that Sabal Trail file a plan for investigating the mixing of topsoil and subsoil on these properties within 20 days. Unfortunately, little can be done about the generational damage that has already been caused by the construction of this pipeline to the rich alluvial topsoil, which these farmers depended upon for their livelihood.

As of this writing, the fate of the Sabal Trail pipeline remains unclear.

But if the court maintains its Jan. 31 decision and the pipeline’s operation is stalled indefinitely, environmental advocates can claim at least one victory: one less conduit for fossil fuels that harm air quality and fuel climate change.

And that mere possibility has the pipeline industry quaking in its boots: “major landmark victory” and “could shut it down” says the industry press.

Let the carbon bubble pop, and let the sun rise!

2 thoughts on “Sabal Trail troubled that the experts were right”