Here are the winners, waiting in the hall before the jury came back: 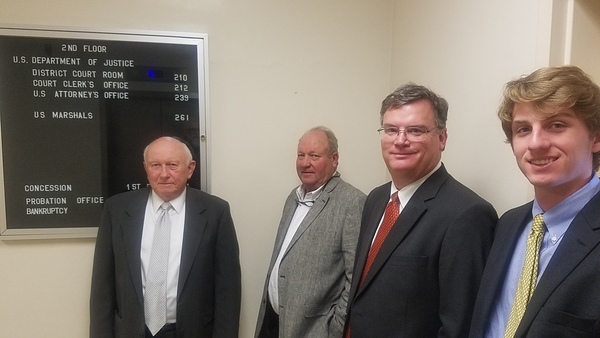 The jury today made this award in Case No 4:16-cv-102 even though Clay D. Land, Chief U.S. District Judge, Middle District of Georgia, did not let the defendant’s attorney, Jonathan P. Waters, talk about sigma or market devaluation or safety or environmental issues. When Waters in his initial remarks started to talk about how Sabal Trail claimed its pipeline is for public benefit, yet even FERC’s permit admits it is purely for profit, the judge cut him off and said the jury couldn’t consider that, and must focus only on fair market value, which is the only subject of this trial, even if the pipeline stood to profit $100 billion. Waters noted that Plaintiff’s attorney Matthew Calvert did talk about environmental issues in his opening statement, but Judge Land said that was not admissible, either, and nobody could talk about any of those things.

Calvert yesterday swore in a witness whom he claimed would testify exactly the same as a different witness Waters had deposed. Judge Land was having none of that, and repeatedly said that if the witness could schedule being deposed, he could schedule showing up as a live witness. Eventually the judge ruled “This witness shall not be allowed to testify.”

Plaintiff’s appraiser, J. Carl Schultz of Atlanta, testified at length, except when asked about how much he was paid, when his memory failed. Plaintiff’s attorney in his summation pointed at a filed document that showed about $11,000 paid to Shultz’ firm for three appraisals. Defendant attorney Waters in his summation made hay out of that: $11,000 times 40 appraisals is about half a million dollars, far more than ever offered to the defendant.

After the jury gave its verdict and the judge dismissed them, Judge Land discussed next steps with the attorneys, and decided to have the Clerk of Court enter a standard judgement. This appears to mean Sabal Trail should pay the amounts awarded by the jury and get title to the easement. The judge noted he expected post-trial motions or appeal. Both attorneys said they would consult with their clients on that. Waters noted they did not waive their right to appeal.

Judge Land then said he wanted to combine all the other four cases into one and try it in Valdosta in September, starting shortly after Labor Day. Calvert noted he had different expert witnesses for different cases. The judge said he wanted to avoid going through Voir Dire four times. Waters suggested Voir Dire for a large pool of jurors, then select a jury for each trial one by one. The judge said he would consider that, and asked the attorneys to check their calendars for September.

The remaining defendants include Sandra Y. Jones of Moultrie, whose husband Fred Jones was in the courtroom yesterday and today.

We shall see if Sabal Trail will lose four more times in September.