Attorney Jonathan P. Waters had some new questions this time for the same old Sabal Trail witnesses from last time. The trial continues this morning; see you there.

Gil Norman, Sabal Trail Right of Way Manager, who at $200,000 a year has made more than $1 million off of helping Sabal Trail get easements to “use as we see fit in our absolute discretion.“; Michael Fletcher, Engineering Specialist, who said Sabal Trail put thicker pipe on land that might be developed (so thinner on farmland) and pipe probably would have less top cover under dips between hills; and property appraiser Carl Schultz, who “summarized the summaries” of eleven papers, at least one paid for by a pipeline company. 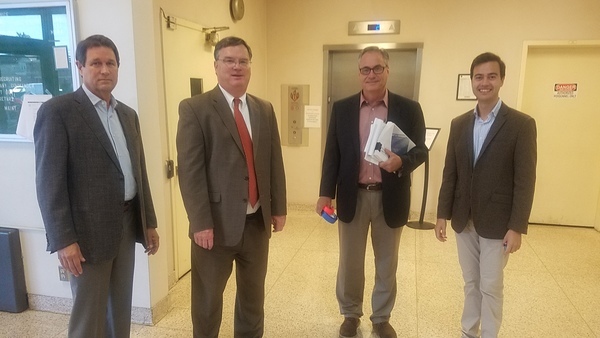 Defendant Jeb Bell brought a 32-inch hoop to illustrate how big Sabal Trail is bigger than that at 36 inches). 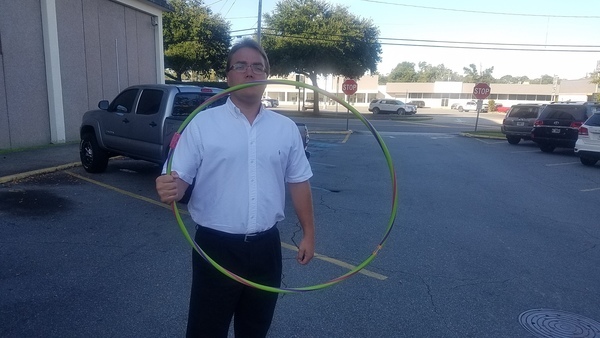 Sabal Trail Right of Way Manager Gil Norman attested that FERC could approve changing all the pipe and landowners would have no say. He admitted that “due to weather” some seeding and fertlizer needs to be redone in Georgia. He claimed there were no erosion issues in Georgia. Waters asked him about Randy Dowdy’s land, but Sabal Trail’s attorneys (led by the same Matthew J. Calvert who’s been sending letters to landowners for Sabal Trail since 2013) objected, and the judge sustained. Nonetheless, Norman asserted that some erosion “is always going to happen due to mother nature” and “that’s what operations is for.” The same Sabal Trail operations that mis-handled the stink leaks at the Dunnellon, Florida, compressor station.

Engineer Mike Fletcher (no, not the one who works for Lowndes County) said FERC required three foot top cover. So Andrea Grover’s assertion back in 2014 that “they would negotiate with landowners for different allowances, such as if they needed the pipeline to run deeper than the minimum 36 inch allowance” apparently never happened. These three cases are for lands in Colquitt County, where the County Commission in 2014 asked for 5 feet of top cover, as did Brooks County.

Yet to run an 80,000 pound logging truck over the pipeline requires five-foot top cover, Fletcher testified. According to Sabal Trail maps of top cover depths in evidence, on much of the affected properties that is the case, but when Sabal Trail receives a request for such use it has to send out an engineer to stick a rod into the ground to measure the actual depth. Sabal Trail’s markers above-ground give no indication of depth.

Property appraiser Carl Schultz again talked about methods including paired sales and regression models. Attorney Waters grilled him on how he used a National Wetlands Inventory map from the U.S. Fish and Wildlife Service in a first appraisal before these lawsuits were instigated by Sabal Trail, and in a second appraisal later used a wetlands map supplied by Sabal Trail. The two maps show different shape, size, and placement of the wetlands on the Isaacs property. Yet Schultz did not account for any effect of that wetland in his appraisals. He also did not count any damage to property value from the pipeline, even though he said he would have if the pipeline had crossed the property near the main road.

The jury of eight is six white women, one white man, and one black man. They all listened attentively the whole time, sometimes taking notes, doing their civic duty. If they are understanding what they are hearing as well as the previous two juries, Sabal Trail may lose again. We shall see.