Sabal Trail didn’t tell the state of Florida until a week later that it had leaked odorless gas from its Hildreth Compressor Station site in Suwannee County, Florida. And 10,405.5 pounds of Volatile Organic Compounds. What were those possibly hazardous substances, Sabal Trail? 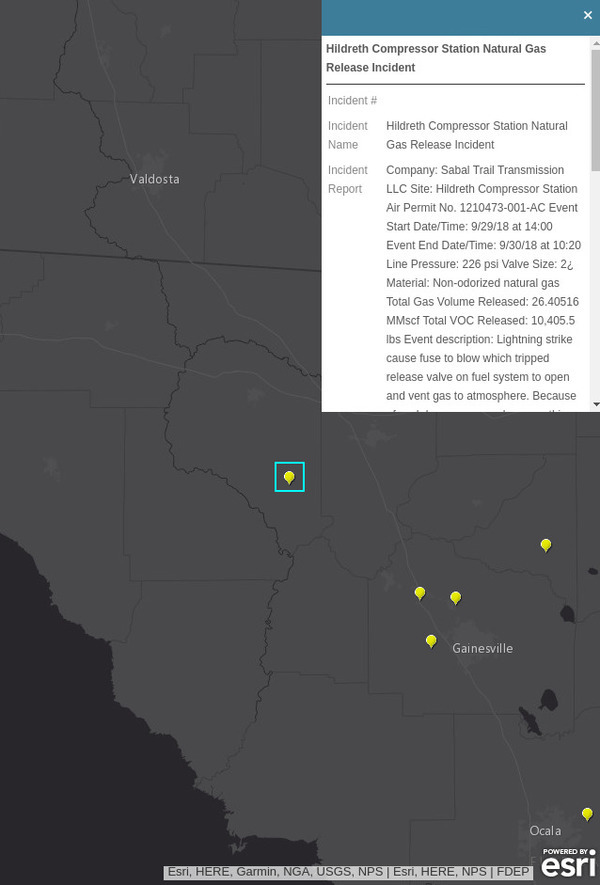 Apparently they weren’t prepared for lightning. Where’s your vaunted cathodic ionization now, Sabal Trail? You and all the other pipeline companies claim that will detect leaks.

Locals report hearing a leak that Saturday morning when there was a blue sky, so even the lightning is uncorroborated. Because the gas is odorless, they could not smell it. But they could hear it.

Yet we were repeatedly told Spectra Energy (now Enbridge) has a great safety record. Nevermind three decades of corrosion, leaks, and explosions. And now they’re blaming lightning that may not have even happened.

According to Sabal Trail’s report, it took them more than 19 hours just to stop the leak. Do you feel safer?

Other than a couple of truck diesel fuel spills, that Sabal Trail leak was the only notice of pollution in the Suwannee River Basin in Florida in the past 30 days. We know this because Florida publishes pollution reports the same day received. FDEP also has signup for alerts. I thought I was signed up, but I didn’t see this alert directly. Thanks to WWALS member Cindy Noel for sending it to me, and apologies for being slow about posting it.

If anything like this has happened in Georgia, for example at the Albany Compressor Station site, nobody would have gotten a notice, because Georgia does not publish spill notices and there’s no signup for alerts. If Sabal Trail leaked near you, you couldn’t smell it: it’s odorless. The main line isn’t like the Citrus County Pipeline, which gets Mercaptan stink put in at the Dunnellon Compressor Station site, where Sabal Trail has repeatedly done its Three Stooges act of leaking hazardous Mercaptan.

Your organization can sign up to ask GA-EPD to publish spill reports the day they get them with email signup.

And you may want to help with the pending WWALS lawsuit against FERC for shirking its LNG oversight duty. Should people in Suwannee County risk pipeline leaks for any gas that’s headed for export for private profit?