Water quality testing of drinking wells and rivers is needed, and not just when there is a spill. Maybe the state of Florida will help fund it. Or maybe Valdosta should. It doesn’t seem right that Hamilton County should have to pay for it. 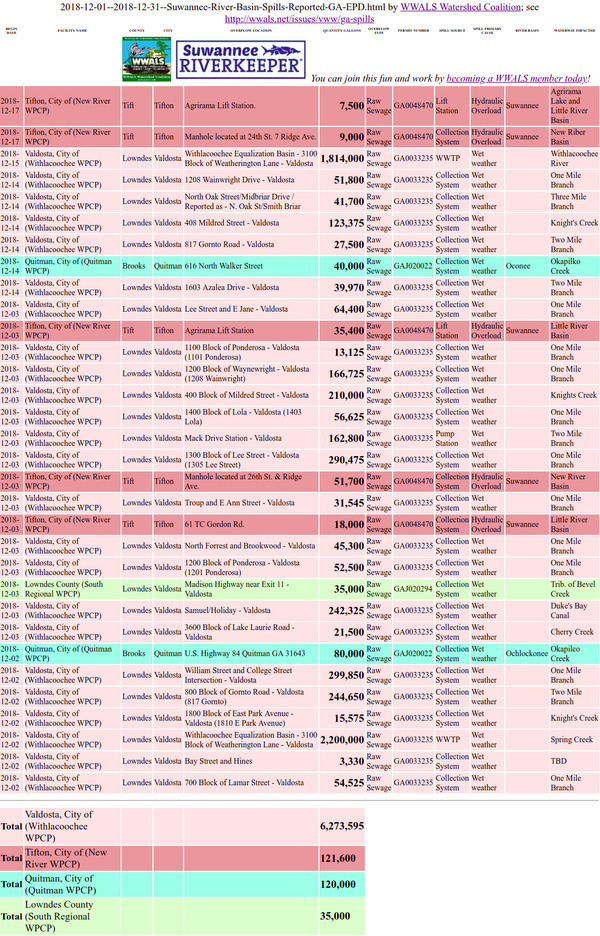 The main newspaper of Suwannee and Hamilton Counties, Florida, is getting into the act, but seems to only know part of the picture. Editorial: It’s time for support with sewage spills, The Suwannee Democrat, Jan 24, 2019,

Area residents have had — and some took advantage of — their chance to voice concerns with state legislators.

Now it is time to see if those concerns were heard and will be addressed.

Both in Hamilton and Suwannee counties, the main topic discussed by residents and local elected officials was the ongoing problem with wastewater spills from Valdosta, Ga., contaminating the Withlachoochee River as well as other North Florida waterways.

The editorial goes on to quote the legislators, to note that they have no jurisdiction over the problem (except maybe a lawsuit), and that Valdosta’s new-ish Withlacoochee Wastewater Treatment Plant did not solve the problem.

It wasn’t as two spills in December proved.

We know this because of the daily reports GA-EPD is now posting after WWALS organized a campaign to get them to, involving 30 organizations in Florida and Georgia. For Valdosta’s spills since 2015, see this recent WWALS blog post.

Jacqueline Mathis said her husband became gravely ill from the E. coli from their well water that was infected by wastewater sewage in the Withlacoochee River.

“Will you please help us with this problem?” Mathis asked.

She added that everyone should have their wells checked for E. coli

Photo: Jessie R. Box for The Suwannee Democrat; Chris Mericle has concerns with the wastewater spills 2019-01-16.

Chris Mericle said wells that are miles from the river are also affected.

“We need somebody that will make this a priority every day,” Mericle said.

He also asked that the state find funding for water quality testing and water treatment for those who cannot afford it.

“This is something we didn’t cause,” Mericle said.

WWALS has started a water quality testing program, but of course it takes time to find and train volunteers, while the Florida Department of Health and the Florida Department of Environmental Protection (FDEP) already have trained staff who could do this, with proper funding. FDEP and the Suwannee River Water Management District (SRWMD) already do a surprising amount of testing, but not where the Withlacoochee and Alapaha Rivers come into Florida, except for a week after a major spill.

Much of the current lawsuit talk seems to be coming from newly elected Florida statehouse District 10 Representative Chuck Brannan.

The possibility of filing a lawsuit was talked about, but commissioners say its the last resort. Burnham emphasized, “first of all we would like Valdosta to know we would like to help them, we’re not here to be adversarial with them, stir up controversy, we’re not automatically tossing out litigation.”

What was decided at Thursday’s meeting was commissioners want to arrange an in-person meeting with Valdosta city council members to find possible solutions including requesting federal aid to stop the spills.

And how about some state aid for water quality testing.

According to that WCJB story, the Rivers Task Force is also still operating with partial information:

“100 plus mile area impact in our state based on sewage spills occurring in the city of Valdosta,” said Madison County Commissioner Rick Davis, in reference to the multiple sewage spills coming from across State lines.

In just 2018 alone there were three spills. Two resulted in 435-thousand gallons of sewage water going into the Withlacoochee, with the last spill yet to have a definite number of gallons spilled. And those are small numbers compared to previous spills.

It was a lot more than three spills and many more gallons than that. Plus a number for that last spill has been reported.

Looks like I need to send them an update.

Furthermore, one thing Valdosta has amply demonstrated through their own water quality testing is that fecal bacteria are getting into the rivers when there are no spills. 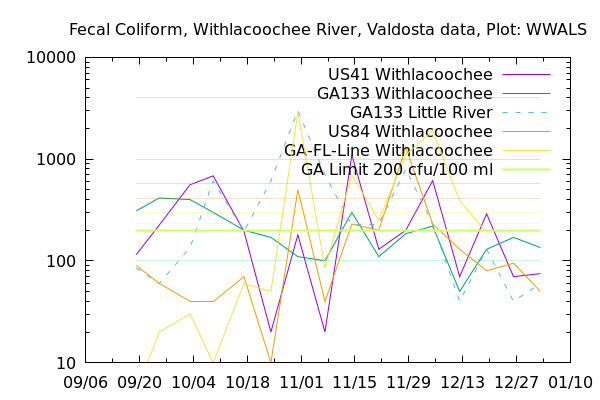 I’d like to know where that’s coming from and see what can be done to stop it. Wouldn’t you?

Valdosta is slowing its river testing from weekly to only monthly. WWALS is doing what we can to pick up the slack, and maybe you’d like to help.

However, shouldn’t water quality testing really be the job of the states of Georgia and Florida?

Table of Sewage Spills into Suwannee River Basin in December 2018