Approved at the Sunday WWALS board meeting and filed last night via regulations.gov as PDF.

To Whom it May Concern:

In addition to supporting the comments of Waterkeeper Alliance and the Southern Environmental Law Center (SELC), WWALS adds these comments on groundwater.

The Proposed Rule’s categorical exclusion of groundwater makes no sense here above the Floridan Aquifer where surface water and groundwater constantly interchange, and pollutants travelling through groundwater are a frequent source of health, environmental, and economic problems. 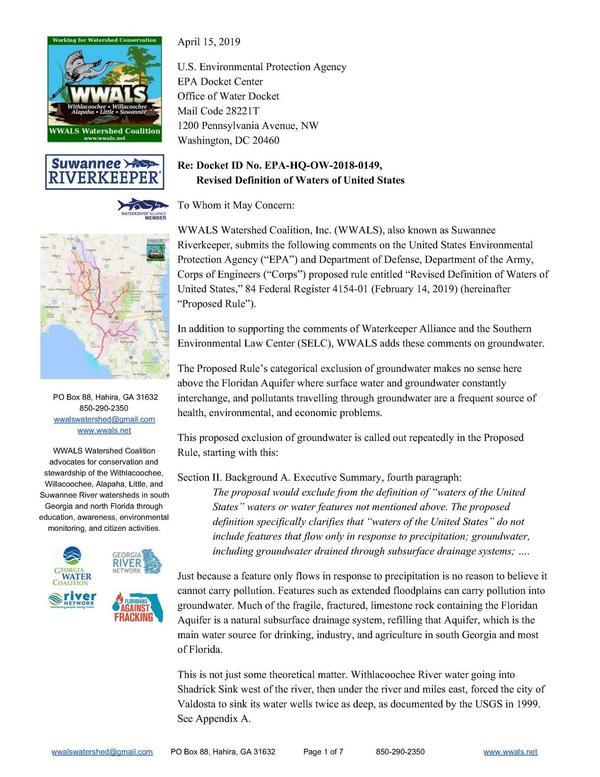 This proposed exclusion of groundwater is called out repeatedly in the Proposed Rule, starting with this:

The proposal would exclude from the definition of “waters of the United States” waters or water features not mentioned above. The proposed definition specifically clarifies that “waters of the United States” do not include features that flow only in response to precipitation; groundwater, including groundwater drained through subsurface drainage systems; ….

Just because a feature only flows in response to precipitation is no reason to believe it cannot carry pollution. Features such as extended floodplains can carry pollution into groundwater. Much of the fragile, fractured, limestone rock containing the Floridan Aquifer is a natural subsurface drainage system, refilling that Aquifer, which is the main water source for drinking, industry, and agriculture in south Georgia and most of Florida.

This is not just some theoretical matter. Withlacoochee River water going into Shadrick Sink west of the river, then under the river and miles east, forced the city of Valdosta to sink its water wells twice as deep, as documented by the USGS in 1999. See Appendix A.

This is not just an issue for Valdosta, or Lowndes County, or Georgia. Florida has even more sinkholes and springs than south Georgia, and underground water also moves sideways all over the Floridan Aquifer, as has been known since at least the 1980s. See Appendix B.

More recent USGS research also finds salt water moving in layers among the fresh water, including the “Apalachicola salinity feature” all the way from the Gulf of Mexico to Lowndes County, Georgia, with a special additional “brackish Valdosta feature”; see Appendix C.

If natural river water and sea salt can move underground for many miles, there is no reason to expect that sewage or chicken manure or coal ash or pipeline leakage or drilling fluids or fracking waste could not do the same.

The section on the Proposed Definition has a discussion on what would be excluded, in III.H.

In paragraph (b) of the proposal, the agencies propose eleven exclusions from the definition of “waters of the United States.” Specifically, under this proposal, any water not enumerated in paragraphs (a)(1) through (6) would not be a water of the United States. The proposed rule would exclude groundwater, including groundwater drained through subsurface drainage systems. This proposed rule would exclude ephemeral surface features and diffuse stormwater run-off such as directional sheet flow over upland.

The main change to U.S. statutes would be this additional exclusion from Waters of the United States, as 33 CFR 328.3(b)(2):

Yet directional sheet flow over upland can, for example, overflow a wastewater treatment system, such as happened with Valdosta, Georgia’s, old (now-closed) Withlacoochee Wastewater Treatment Plant (WWTP) in 2009 and 2013, sending untreated sewage into the Withlacoochee River; see Appendix D. Then and in more recent years, owners of wells near that same river find E. coli in their well water that may be timed with sewage or other contaminants coming downstream.

The agencies seem to realize the Proposed Rule lacks clarity regarding groundwater, when they ask:

The agencies and the Proposed Rule do not seem to recognize widespread groundwater situations such as the Floridan Aquifer, which underlies most of Florida, south Georgia, and parts of South Carolina and Alabama, with natural drainage systems into and out of levels of the aquifer from shallow to deep.

Further, EPA and the other agencies should do what Sierra Club proposed three years ago. They should declare the Floridan Aquifer a Sole Source Aquifer (SSA) with extra protections.[1] As that 1999 USGS report says (see Appendix A), the Floridan Aquifer “is the sole source of water supply for Valdosta, Georgia, and much of the surrounding area.” The surrounding area which uses groundwater as its sole source of water supply, for drinking, industry, and agriculture, most if not all of the Suwannee River Basin in Georgia and Florida, and much if not all of the Floridan Aquifer.

Thank you for the opportunity to submit these comments.

Figure E-1. Estimated percentage of Withlacoochee River water in ground water in the Upper Floridan aquifer, June 1991. (Modified from Plummer and others, 1998.)

The Upper Floridan aquifer, which is the sole source of water supply for Valdosta, Georgia, and much of the surrounding area, receives large volumes of direct discharge from the Withlacoochee River through sinkholes in the streambed or off-channel. A highly interconnected conduit system has developed in the Upper Floridan aquifer in this area, which extends at least 15 miles from the sinkhole area. Chloride and isotopic data were used by Plummer and others (1998) to map the percentage of Withlacoochee River water in ground water in the Upper Floridan aquifer (Figure E-1). These data indicate that ground water in parts of the Upper Floridan aquifer contains high percentages of recently recharged Withlacoochee River water. Plummer and others (1998) note that, although the patterns shown in Figure E-1 are generally true over the area, extreme variations can occur at a given location, as would be expected because of the large variations and discontinuities in hydraulic properties in the karst environment and time-varying inflows of river water into the aquifer. 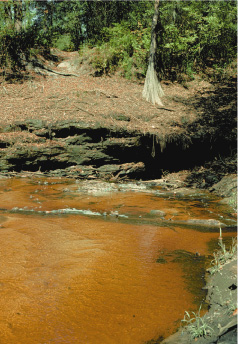 The strong connection between the Withlacoochee River and ground water in the Valdosta area has created concerns about the potential for contamination of ground-water supplies by contaminants in the river. There also are concerns about the effects of natural organic matter in the river water. For example, in the early 1980’s, it was recognized that chlorination of aquifer water produced disinfection by-products in excess of drinking-water standards. This occurred as a result of reaction of chlorine with the high amounts of natural organic matter in the river water recharged to the aquifer.

Appendix B, Groundwater movement in the Floridan Aquifer. 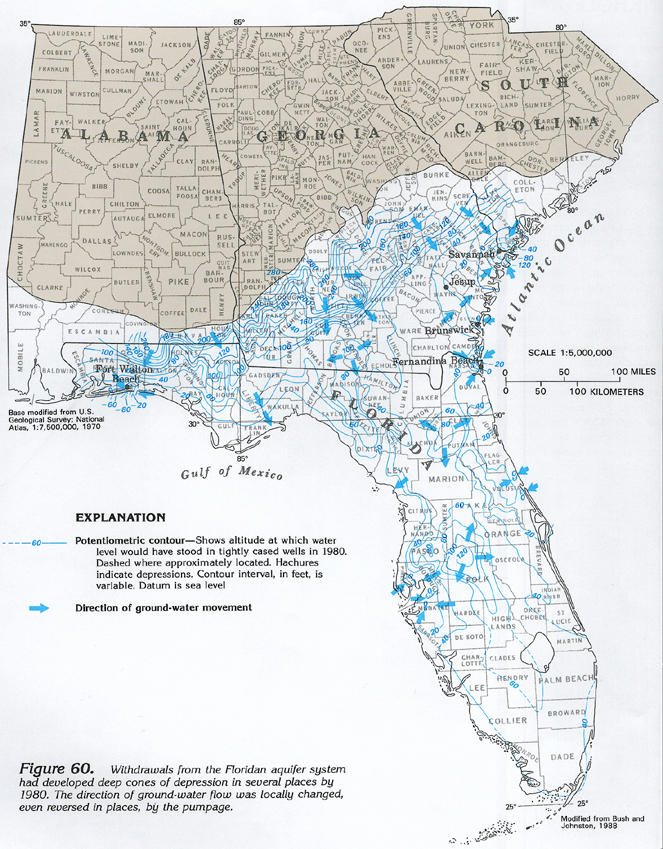 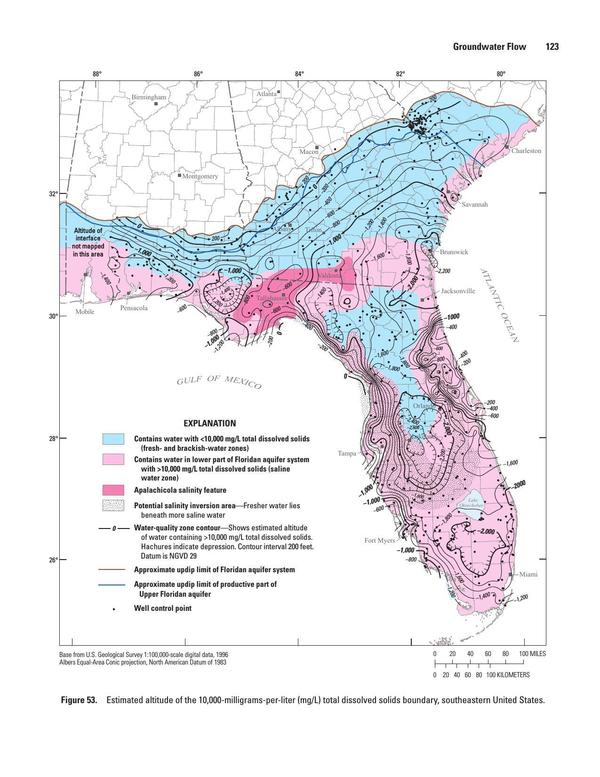 At approximately 1:30 p.m. today, March 3, the Withlacoochee Wastewater Treatment Plant was brought online and returned to normal operation, after a loss of function for only three days compared to the nine days of complete loss of function experienced in the flood of 2009.

Today, the river receded to the point where the temporary by-pass pumps could be connected to the existing valves. The system was turned on, became fully operational and began full treatment capabilities.

Lessons learned from the 2009 flood resulted in proactive measures which include the following:

The installation of bypass pumps, pipes and valves to utilize in the event of an emergency or act of God.