Attendees from the Suwannee River Basin were the majority at the first public meeting about Georgia EPD’s revisions to its Nonpoint Source Management Plan. Suwannee Riverkeeper John S. Quarterman attended, as did Erica McLelland and Julie Shutters. 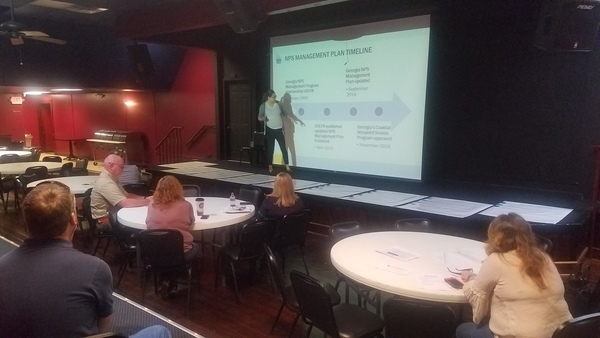 At the end of the public comment period, WWALS sent in the letter below (see also PDF), which brings in many issues, focusing them all on water quality testing.

To Whom it May Concern:

Thanks, congratulations, and compliments

Thank you for holding the public meeting in Dawson on March 29, 2019. Both the presentations and the discussions were most informative. For future reference, please note that a majority of the attendees were from the Suwannee River Basin, and that Tifton or Valdosta would be much more centrally located for meetings related to that Basin.

Congratulations on the success story about Piscola Creek no longer being impaired for dissolved oxygen. Since Piscola Creek is in the Suwannee River Basin, and we have been following that project for some years, we are very happy to see it successfully concluded. http://wwals.net/?p=1578

I would also like to applaud the active planning document with the tracking tables. 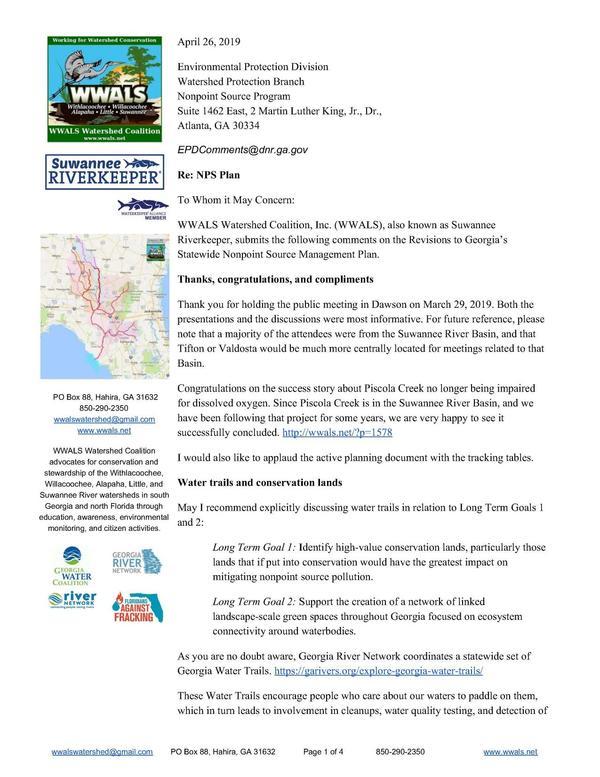 May I recommend explicitly discussing water trails in relation to Long Term Goals 1 and 2:

Long Term Goal 1: Identify high-value conservation lands, particularly those lands that if put into conservation would have the greatest impact on mitigating nonpoint source pollution.

Long Term Goal 2: Support the creation of a network of linked landscape-scale green spaces throughout Georgia focused on ecosystem connectivity around waterbodies.

As you are no doubt aware, Georgia River Network coordinates a statewide set of Georgia Water Trails. https://garivers.org/explore-georgia-water-trails/

These Water Trails encourage people who care about our waters to paddle on them, which in turn leads to involvement in cleanups, water quality testing, and detection of pollution sources, including nonpoint sources.

While land acquisition is important for water trails (see next paragraph), much less expensive measures such as signage on roads and at the water can be quite effective, as well.

Regarding land acquisition, let me call your attention to the River Camps on the Suwannee River Wilderness Trail (SRWT) in Florida: https://www.floridastateparks.org/parks-and-trails/suwannee-river-wilderness-state-trail/river-camps

There are five of them, spaced along the Suwannee River. Each one has hot and cold running water, showers, restrooms, and elevated screened sleeping platforms, plus a gated dirt access road so that a caretaker can live there in an RV in exchange for upkeep. Everybody loves these SRWT River Camps.

At least one is apparently going to be built in Georgia, in Floyd County, whose voters approved more than $3.5 million in funds for it and related facilities in their recent SPLOST referendum. https://www.romefloyd.com/departments/Floyd-County-SPLOST

There are of course less expensive campsite plans available, but apparently the voters of Floyd County really liked the SRWT River Camp model, since they approved the Floyd County SPLOST by a record margin.

There is some possibility of a similar action in Lowndes County, which will have a SPLOST referendum this year. There is a precedent, in that the previous Lowndes County SPLOST included funds for a Naylor Boat Ramp on the Alapaha River. Langdale Park of Valdosta-Lowndes County Parks and Recreation Authority (VLPRA) has plenty of land that could be used for a River Camp, and there is land available for sale at the confluence of the Little River with the Withlacoochee River. The latter in particular would conserve land at a junction of two rivers, thus heading off for the long term some nonpoint source pollution.

So I suggest working water trails into Longterm Goals 1 and 2, perhaps with specific sub-items for signage, camping, and campsite buildings and facilities.

As you are probably aware, fertilizer nitrates leaching through soils into springs and streams is a huge problem in Florida, with state-mandated Basin Management Action Plans (BMAPs) recommending in the Suwannee River Basin reductions of 83 to 92%. http://wwals.net/?p=44612 Unfortunately, the Florida BMAPs do not include steps that will actually produce such reduction. Fortunately, the problem does not seem to be nearly as severe  in Georgia, at least in the Suwannee River Basin. Nonetheless, we commend this goal:

We have at least one section of our Little River which appears to have chronic agricultural sediment, so we commend this goal:

Clearcutting of woods and destruction of riparian buffers for developments and roads and impermeable surfaces for roads and parking lots and buildings appear to be significant contributors to the flooding and sewage spill problems seen in recent years in Valdosta, but also in Tifton, Quitman, and elsewhere. Many of the urban goals in the Plan may help with this problem.

A problem that crosses urban and rural boundaries, involving clearcutting, impermeable surfaces, soil mixing, erosion, and hydrologic and habitat modification, including introduction of invasive species, is natural gas and petroleum products pipelines. http://wwals.net/?p=42961 Their construction produces many of these problems, and their maintenance exacerbates them, with mowers and other equipment carrying invasive species and sometimes causing erosion.

Some of these same issues are caused by other utilities such as electric power lines, but pipelines, unlike power lines, involve digging through the ground and under rivers.

Surface Mining is perhaps the most similar topic that already appears in the Plan. Pipelines are somewhat similar to very long, thin surface mines.

For these reasons I recommend adding a section on Pipelines, with Goals similar to those for Surface Mining.

A recent development in Florida is that the Florida Department of Environmental Protection (FDEP), to its monthly water quality monitoring that already including testing for fecal coliform, pH, and dissolved oxygen, has added DNA analysis and markers for human sewage. This is at least for four locations in the Suwannee River Basin, at the state line on the Withlacoochee and Alapahoochee Rivers, and at the confluences of the Withlacoochee and Alapaha Rivers with the Suwannee River. There is some possibility that two other weeks during each month will also be monitored similarly. This information came in a meeting FDEP requested with Waterkeepers Florida in Orlando on April 15, 2019.

As you are probably aware, sources of E. coli have become a bi-state issue because of sewage spills from Valdosta. http://wwals.net/?p=48962

This issue is of course not limited to Valdosta, with numerous cities around Georgia spilling even more sewage from time to time, as is now more visible, thanks to the daily Sewage Spill Reports posted by GA-EPD. http://wwals.net/blog/issues/vww/ga-spills/

No matter how great the new Plan is, the only way to be sure it is working is through monitoring.

Thank you for the opportunity to submit these comments.

By the way, when you don’t see WWALS blog or facebook or other posts for a few days, that usually means we’re all absorbed in going to meetings or doing research or writing up letters such as this one.