Sierra Club has already published a call urging Gov. DeSantis to veto this “Roads to Ruin” toll expressway bill. WWALS is a signatory, among the six Florida Waterkeepers signed on, with 90 total organizations.

Why is Florida even considering building more toll roads while the Panhandle’s homes, businesses, and agriculture are still in ruins after Hurricane Michael? 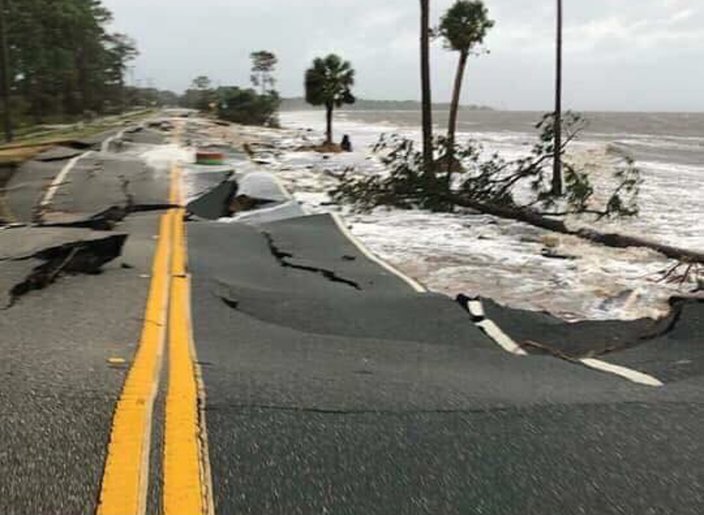 As the letter to Gov. DeSantis says: “Providing safe shelters for evacuees is a more practical and affordable response to extreme weather events than new toll expressways.”

Tallahassee —Today 90 conservation organizations, civic groups, and businesses representing the Panhandle to the Keys sent a letter to Governor Ron DeSantis urging him to veto the Transportation Corridor bill, SB 7068, when it arrives on his desk.

The letter to the Governor follows similar letters sent to the Senate and House last week and will test the Governor’s post-inaugural declarations of dedication to protecting the Everglades, the springs, and the state’s water quality.

The 90 below-signed organizations ask that you veto legislation that seeks to construct three toll roads through rural Florida. These highways will not reduce traffic or provide safety during hurricane events.

1000 Friends of Florida found in its Florida 2070 report that Florida is on track to increase developed land to a full third of the State in the next half century. Sprawl is not progress. These toll roads will cost Florida hundreds of thousands of acres of farms and rural lands and fragment landscape and wildlife habitat. The intended “benefits” of these toll roads include water and sewer infrastructure which, with on and off ramps, will accelerate urban sprawl.

This legislation would carve three corridors through Florida’s undeveloped areas:

· “Southwest-Central Florida Connector” extending from Collier County to Polk County; a previous highway planned for the route was called the Heartland Parkway

Building these roads will be very expensive. The funding would grow from $45 million next fiscal year to $90 million in the 2020-2021 fiscal year, about $135 million the next year, and a recurring amount of $140 million starting in the 2022-2023 fiscal year. And that’s just for planning. Billions will be bonded to actually build hundreds of miles of limited access highways. Florida will be paying off the debt for more than a generation instead of funding education, healthcare, or needed infrastructure for wastewater, drinking water, and the roads and bridges we already have.

These hugely expensive road projects and accompanying urban sprawl will devastate habitat for the Florida Panther and dozens of other endangered and threatened Florida species. They will destroy important wetlands, forests, springs, and aquifer recharge areas from Florida Bay to the Georgia border even though they would not serve an identified transportation purpose. In fact, the FDOT Interstate 75 Relief Task Force recommended in 2016 that rather than new roads, a better approach was expanding the vehicle capacity of the interstate and connecting highways.

Transit and planning relieve congestion, not building roads. Relieving congestion in urban areas requires a focus on transit. The American Society of Civil Engineers’ 2016 Report Card notes that only 2% of Floridians’ commutes to work were made by public transit and that Florida needs to develop and connect its transit networks with an additional $1.3 billion investment.

Road building is not a sustainable economic development strategy for rural communities. In fact, these roads will route traffic away from communities established on existing roads, harming their economies.

New tollways through west-central Florida are not the answer to hurricane preparedness.

Floridians need more safe spaces in their communities to shelter during storms; only 42% of schools are designated hurricane shelters, indicating many schools do not meet the structural requirements. Providing safe shelters for evacuees is a more practical and affordable response to extreme weather events than new toll expressways.

We urge you to spend Florida tax payer dollars wisely and reject the toll roads.

Save the Manatee Club
Katie Tripp, Ph.D., Director of Science and Conservation

Letter to the FL House: https://drive.google.com/file/d/1T9LGnGaV4WictoCskTI3x3UNenUZm7cy/view?usp=sharing

Letter to the FL Senate: https://drive.google.com/file/d/11Fna73PROulA1lVcENs0WMSa9WQaSxSP/view?usp=sharing