Thank you for your hospitality at your July Regular Session. Especially thanks to the County Clerk for letting me back in to get my hat, and to the County Administrator for coming to St. George Tuesday to find a spot in the shade. Please distribute this letter to the rest of the Commissioners.

On your agenda for tonight is a resolution in support of the titanium mine proposed by Twin Pines Minerals (TPM). While I understand everyone wants jobs, I respectfully submit that far too many things are still unknown, so the time is premature for the Commission to support or oppose this proposed mine. 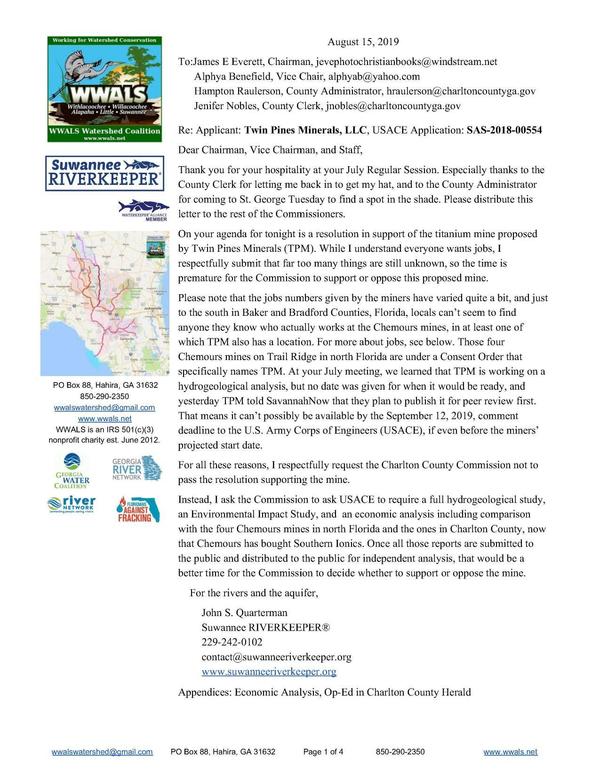 Please note that the jobs numbers given by the miners have varied quite a bit, and just to the south in Baker and Bradford Counties, Florida, locals can’t seem to find anyone they know who actually works at the Chemours mines, in at least one of which TPM also has a location. For more about jobs, see below. Those four Chemours mines on Trail Ridge in north Florida are under a Consent Order that specifically names TPM. At your July meeting, we learned that TPM is working on a hydrogeological analysis, but no date was given for when it would be ready, and yesterday TPM told SavannahNow that they plan to publish it for peer review first. That means it can’t possibly be available by the September 12, 2019, comment deadline to the U.S. Army Corps of Engineers (USACE), if even before the miners’ projected start date.

For all these reasons, I respectfully request the Charlton County Commission not to pass the resolution supporting the mine.

Instead, I ask the Commission to ask USACE to require a full hydrogeological study, an Environmental Impact Study, and  an economic analysis including comparison with the four Chemours mines in north Florida and the ones in Charlton County, now that Chemours has bought Southern Ionics. Once all those reports are submitted to the public and distributed to the public for independent analysis, that would be a better time for the Commission to decide whether to support or oppose the mine.

Since mid-July, news reports say the miners have been claiming numbers of jobs in excess of the numbers in the application:[1]

Asked for comment on the application, a lobbyist for Twin Pines Minerals, Steve Allen of Joe Tanner & Associates, responded with a written fact sheet that reiterated much of the material in the application. It added an anticipated start date for mining activities, however, of January 2020. It is anticipated that the proposed facility will have an operational life of eight years, the fact sheet stated. It also changed the estimate of workers from the “full-time employment of approximately 150-200 workers from the local area” listed in the application to “this activity will result in the full-time employment of approximately 300 workers.”

And again, in an Associated Press story that has been picked up across the country:[2]

Residents of Baker and Bradford Counties, Florida, home to some Chemours mines that are subjects of the Consent Order, say that they have not been able to find anyone local who is actually employed by Chemours, despite earlier promises of large numbers of jobs, similar to those now being made by TPM.

How many jobs could the mine proposed by TPM realistically be expected to provide? How many of those might be filled by local people? Zero, as may be the case with the Chemours mines in Florida? 100-150 as in the Application? 300 as TPM has been telling the press since the Application?

When asked by a Baker County Commissioner at a Public Hearing for continuation of an existing mine, Chemours claimed 63 employees, but could not even give an estimate for how many of those people were Baker County citizens.[3]

At the same meeting, the taxes paid by the mine to the county was stated as $343,000 a year. That is not close to millions of dollars. An Economic Analysis should determine at least the taxes paid by the various Chemours mine sites, with which to calibrate any claims by TPM of taxes it might pay.

Chemours recently bought Southern Ionic Minerals, LLC (SIM).[4] SIM filed with USACE in 2015 to expand Mission Mine South (MMS) on Winokur Road north of Folkston, in Charlton County, GA.[5] How many people does SIM (now Chemours) employ at that site? How many of those people are local?

The questions above would seem the minimal amount of comparative information about employment relevant to TPM’s various claims of numbers of jobs.

Any more realistic estimate of likely jobs from the TPM mine should be balanced against risks a mine that close to the ONWR would pose to the the 600,000 annual ONWR visits, the hundreds of jobs ONWR supports directly and indirectly, and the millions of dollars ONWR contributes to the Charlton County and the state of Georgia. The TPM Application mine would be far closer to the ONWR than any of the five Chemours mines.

Swamp more important than miners under Consent Order in Florida

Twin Pines Minerals (TPM) promises jobs, taxes, and low impact to mine for titanium between Moniac and St. George, on property that extends up to the Okefenokee NWR.

People from Baker, Bradford, and Union Counties, Florida, say they don’t know any locals who have the mine jobs promised by Chemours. The TPM application for Charlton County promises “projected employment of 150-200 people for 8 years” yet recent news stories say Twin Pines is now claiming 300 jobs. How many is it, from none to 300?

Meanwhile, TPM is under a Consent Order in Florida for multiple violations at Chemours mines, from not collecting data, to being over limits for radium and iron, to silt fences not containing wastewater and not cleaning it up.

That Consent Order includes the Chemours TrailRidge Mine near Starke, Florida. The miners have told multiple organizations they want to ship the ore to Starke, for processing. That’s in Bradford County, between the New River and the Santa Fe River, which flows into the Suwannee River.

During Hurricane Irma, the only pollution spills in the Suwannee River Basin in Florida (other than truck wrecks) were three from those same Chemours mines on Trail Ridge in Baker and Bradford Counties.

Do we need more risk of contamination in the Suwannee River Basin in Florida from Georgia ore?

Do we want to risk the Okefenokee Swamp, the headwaters of the Suwannee and St. Mary’s Rivers?

The Okefenokee National Wildlife Refuge supports far more jobs than the miners’ largest claims. People fish, boat, hike, and bird in the swamp to see its wide variety of animals and plants and lush landscapes, plus people hunt waterfowl that fly out of the swamp.

Profit for a few people is not worth risking all that.

This Thursday, the Charlton County Commission is considering a resolution in support of the mine. While we all understand the Commission wants jobs, there is no need to rush to prejudge this application in favor of the miners.

Please help urge the Commission not to pass that resolution.

At the July Commission Regular Session, we learned that the miners have not yet completed a hydrogeological study. Yet the U.S. Army Corps of Engineers clock is ticking towards a comment deadline of September 12th.

Please urge the Commission to ask the Corps of Engineers to require a hydrogeological study, a real Environmental Impact Statement, and an economic study.

To comment to the Corps yourself, or to request a public hearing, you can write to

or by email to holly.a.ross@usace.army.mil. Please refer to the applicant’s name and the application number in your comments: Twin Pines Minerals, LLC, 2100 Southbridge Parkway, Birmingham, Alabama 35209, Application Number: SAS-2018-00554.

Tuesday at the county auditorium in Folkston and Wednesday at the fire station in St. George, you can come hear from the rest of us starting at 4PM, and from the miners at 5:30 PM.

See also PDF of the above letter.