Water quality testing for nutrients and cyanotoxins were big topics at yesterday’s Public Workshop in Tallahassee. Apalachicola Riverkeeper Georgia Ackerman was there, but had to leave at noon. So John S. Quarterman ended up speaking as Suwannee Riverkeeper and on behalf of Waterkeepers Florida, in Florida’s Triennial Review of Water Quality Standards.

The FDEP presenters made it pretty clear they preferred putting up warning signs based on clorophyl a measurements and whenever cyanobacteria blooms are sighted, as they ask DOH to do now, to waiting for lab tests to come back to confirm, as EPA currently recommends.

They presented 2019 CyanoHAB Sampling Results demonstrating that algal blooms can occur well before the EPA’s thresholds (either recommended or old) are reached. 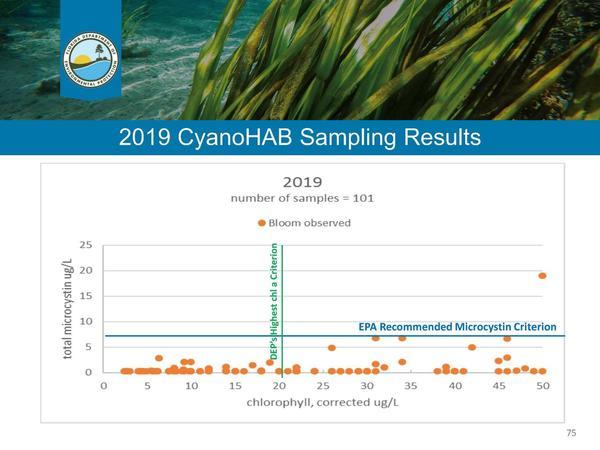 The presenter for that section (I believe it was Dave Whiting, Deputy Director, Laboratory and Water Quality Standards) revealed that many states have many different Recreational Water Guidance/Action Levels. 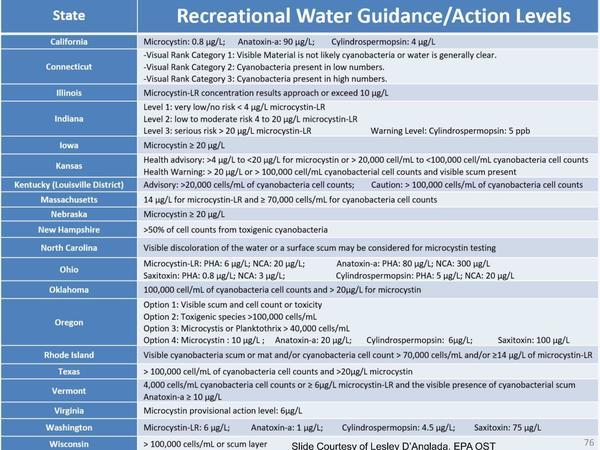 This is because California, unlike EPA, took into account variability, and ended up with far lower thresholds than EPA.

So we have at least this much range in thresholds:

Problems with the EPA’s recommendations include that they assume “100% of child’s exposure (ages 6 – 10) comes from incidental ingestion during swimming”: nevermind solid evidence that airborne cyanotoxins can be as harmful inland as direct water contact, and EPA takes no account of fish consumption, which could occur far away from the water. 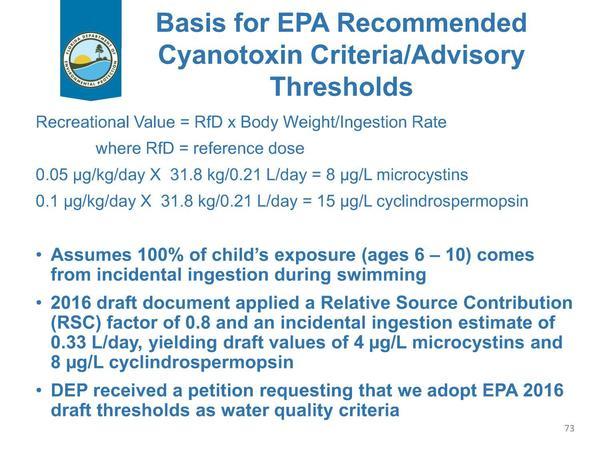 At the end (around 12:30 PM for a meeting that started at 9:00 AM, a fisher of commercial wild tilapia (yes, really, wild and invasive) pleaded with FDEP to do something to protect fish. 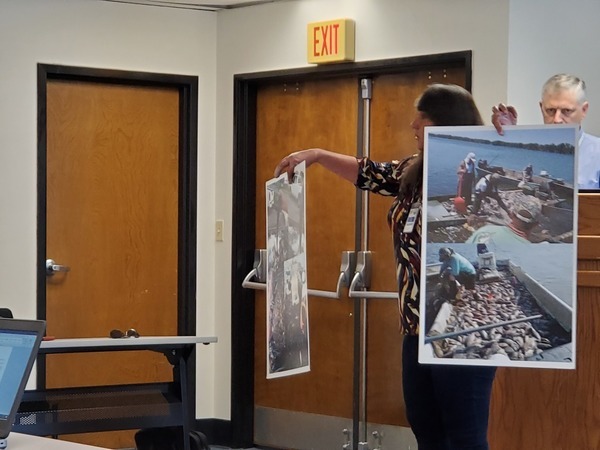 Earlier, they said what they are already doing about that: 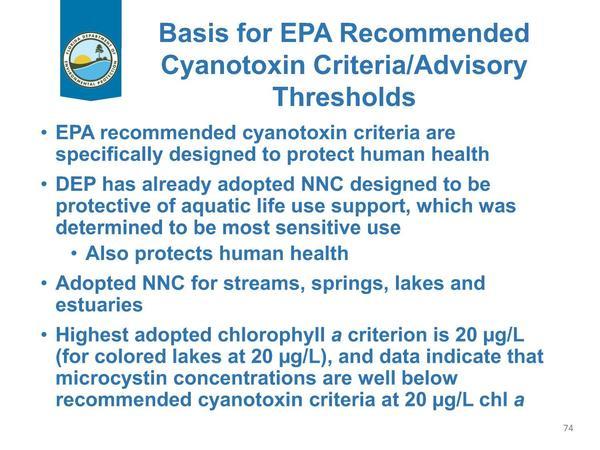 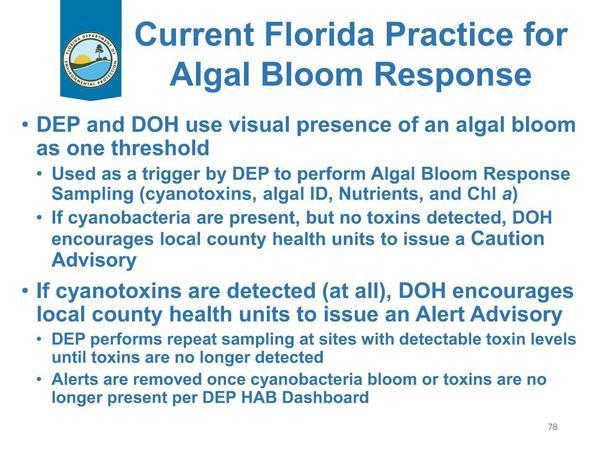 Why, then, is FDEP considering changing to specific thresholds instead? “DEP received a petition requesting that we adopt EPA 2016 draft thresholds as water quality criteria”. Also, the Harmful Algal Bloom Task Force (on which Whiting serves) has requested FDEP adopt some such criteria, without recommending any specific criteria.

I asked given that, as the presenters had said, there is no obvious direct linear connection between nutrients and cyanotoxins, yet nutrients clearly are linked to algal blooms, would it not be prudent, considering the Precautionary Principle, to do much more comprehensive monitoring for nutrients? 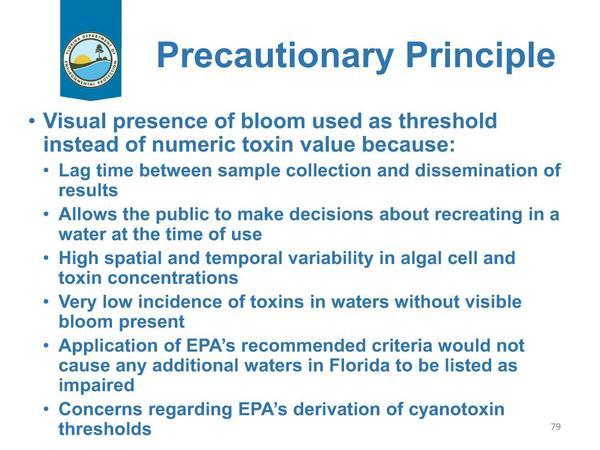 After about 3.5 hours of presentation slides, during which they accepted and answered many questions, FDEP opened Public Comments.

Since Apalachicola Riverkeeper Georgia Ackerman had left, I mentioned the Waterkeepers Florida letter of May 31, 2019, which requested that FDEP set some sort of limits for cyanotoxins, suggesting sticking with the old EPA numbers of 4 μg/L Microcystins and 8 μg/L Cylindrospermopsin. I noted that FDEP had now presented possible even lower thresholds, such as the California numbers, as well as arguments for why FDEP’s current approach could be better than waiting for any threshold to be exceeded. I suggested they could do both: set out signs when blooms were observed, and use that to trigger monitoring for thresholds. This would assist in establishing a connection between nutrient numbers and cyanotoxins. They nodded at that, both then, and afterwards, when I explained that suggestion in more detai to Kenneth Weaver, Environmental Administrator.

So, as Waterkeepers Florida discussed with FDEP in Orlando back in April, it’s a policy decision. As FDEP’s slide 5 says: 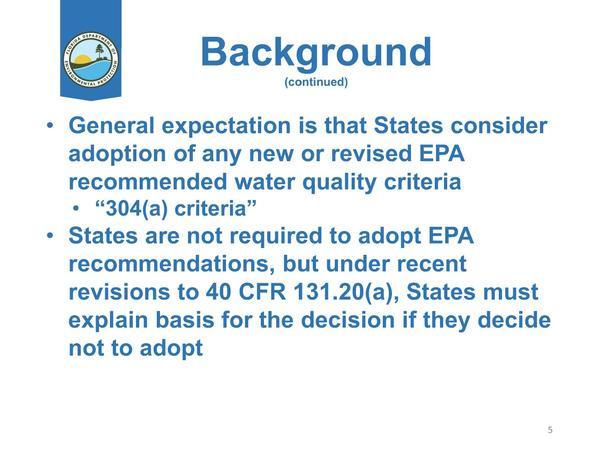 Seems like there are plenty of reasons, most of them explained yesterday by FDEP.

Three more Public Workshops are happening, right now today in Fort Myers, and also Wednesday in Dania Beach and Thursday in Jacksonville, all with the same agenda.

The slides cover many other topics, such as the Florida Reef Tract and effects of turbidity on coral.

Also nutrients such as Ammonia Nitrogen.