Definition of PERENNIAL
1: present at all seasons of the year 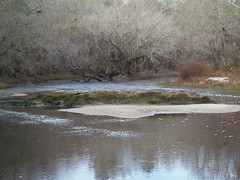 For example, does the Alapaha River at Hotchkiss Landing often (if ever) go dry? No, there is pretty much always water there.

(c)(3) “River corridor” means all land not regulated under Code Sections 12-5-440 through 12-5-457, and Part 4 of Article 4 of Chapter 5 of this title, the “Coastal Marshlands Protection Act of 1970,” in the areas of a perennial stream or watercourse with an average annual flow of at least 400 cubic feet per second as defined by the United States Geologic Survey and being within 100 feet on both sides of the river as measured from the river banks at mean high water.

According to USGS 02317500 ALAPAHA RIVER AT STATENVILLE, GA (the closest USGS monitoring station to Hotchkiss Landing), the mean daily discharge in feet per second over 81 years only ever goes below 400 in September, October, or November, which means the annual mean is above 400.

So the Alapaha River at Hotchkiss Landing is a perennial river, which “shall be protected” with a 100 foot buffer on each side of its banks.

Also perennial rivers are the Withlacoochee River at McMillan Road near Bemiss, GA, the Little River near Adel, GA. Here’s the USGS list of other river monitoring stations in Georgia.