EPA found phosphorus and nitrogen from fertilizers, bacteria and other pollutants from urban runoff, plus mercury, in most U.S. rivers and streams. And they didn’t even mention low dissolved oxygen.

Ian Simpson wrote for Reuters, carried by NBC, EPA: More than half of U.S. rivers unsuitable for aquatic life,

Fifty-five percent of U.S. river and stream lengths were in poor condition for aquatic life, largely under threat from runoff contaminated by fertilizers, the U.S. Environmental Protection Agency said on Tuesday.

High levels of phosphorus and nitrogen, runoff from urban areas, shrinking ground cover and pollution from mercury and bacteria were putting the 1.2 million miles of streams and rivers surveyed under stress, the EPA said.

“This new science shows that America’s streams and rivers are under significant pressure,” Nancy Stone, acting administrator of the EPA’s Office of Water, said in a statement. 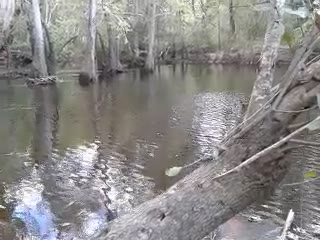 Twenty-three percent was in fair condition and 55 percent was in poor condition, the survey showed. The finding uses an index that combines measures for aquatic life, such as crayfish and water insects.

Of the three major climatic regions surveyed—eastern highlands, plains and lowlands, and the west—the west was in the best shape, with 42 percent of stream and river length in good condition.

In the eastern highlands and the plains and lowlands, 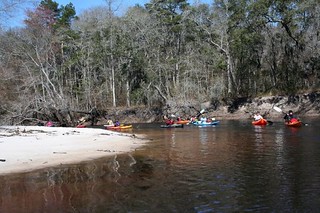 Risk levels of mercury in fish tissue were exceeded in 13,144 miles of rivers. Streams were not surveyed. In 9 percent of river and stream length, samples for enterococci bacteria topped levels for protecting human health.

Mercury in the Alapaha River is a longstanding problem, 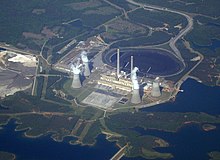 as noted by EPA and detailed by GA EPD. Where does this mercury come from? Usually from coal plants, and in our case probably from Plant Scherer at Juliette, GA, just north of Macon, the third most mercury-polluting plant in the country, according to a 2010 report from the Environmental Integrity Project using EPA data.

And around here we also have arsenic in wells, so it’s likely there’s also arsenic in some of our streams. The origin of this arsenic is probably also agricultural: old fence post treatments, old-style cattle dipping, etc.

Why is there still water that’s too dirty for swimming, fishing or drinking? Why are native species of plants and animals disappearing from many rivers, lakes, and coastal waters?

The United States has made tremendous advances in the past 25 years to clean up the aquatic environment by controlling pollution from industries and sewage treatment plants. Unfortunately, we did not do enough to control pollution from diffuse, or nonpoint, sources. Today, nonpoint source (NPS) pollution remains the Nation’s largest source of water quality problems. It’s the main reason that approximately 40 percent of our surveyed rivers, lakes, and estuaries are not clean enough to meet basic uses such as fishing or swimming.

NPS pollution occurs when rainfall, snowmelt, or irrigation runs over land or through the ground, picks up pollutants, and deposits them into rivers, lakes, and coastal waters or introduces them into ground water. Imagine the path taken by a drop of rain from the time it hits the ground to when it reaches a river, ground water, or the ocean. Any pollutant it picks up on its journey can become part of the NPS problem. NPS pollution also includes adverse changes to the vegetation, shape, and flow of streams and other aquatic systems.

The latest National Water Quality Inventory indicates that agriculture is the leading contributor to water quality impairments, degrading 60 percent of the impaired river miles and half of the impaired lake acreage surveyed by states, territories, and tribes. Runoff from urban areas is the largest source of water quality impairments to surveyed estuaries (areas near the coast where seawater mixes with freshwater).

The most common NPS pollutants are sediment and nutrients. These wash into water bodies from agricultural land, small and medium-sized animal feeding operations, construction sites, and other areas of disturbance. Other common NPS pollutants include pesticides, pathogens (bacteria and viruses), salts, oil, grease, toxic chemicals, and heavy metals. Beach closures, destroyed habitat, unsafe drinking water, fish kills, and many other severe environmental and human health problems result from NPS pollutants. The pollutants also ruin the beauty of healthy, clean water habitats. Each year the United States spends millions of dollars to restore and protect the areas damaged by NPS pollutants.

There’s more in the EPA report.