The Southern Georgia Regional Commission invites you to contact them about agricultural runoff. WWALS is concerned with how industrial farming and clear cutting affects both water quality and quantity in our watershed. 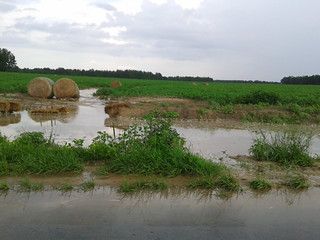 The pictured example of runoff from a cotton field was in Berrien County yesterday. While rain was pouring down, it ran half way across the road, and two cars wrecked. Once it gets across the road, either over it or through the culvert, it runs into the Withlacoochee River. As Pesticide Action Network reminds us, “Conventionally grown cotton uses more insecticides than any other single crop.”

Abbie Fentress Swanson wrote for GPB 6 July 2013, What Is Farm Runoff Doing To The Water? Scientists Wade In,

Agriculture is the nation’s leading cause of impaired water quality, according to the U.S. Environmental Protection Agency.

Scientists want to get a better sense of how all that agricultural runoff is affecting water quality. So this summer, three dozen scientists from the EPA and U.S. Geological Survey are wading into some 100 streams, from Ohio to Nebraska. Their mission: Test for hundreds of pesticides and nutrients used in farming, and check for possible effects on what’s living in the streams. 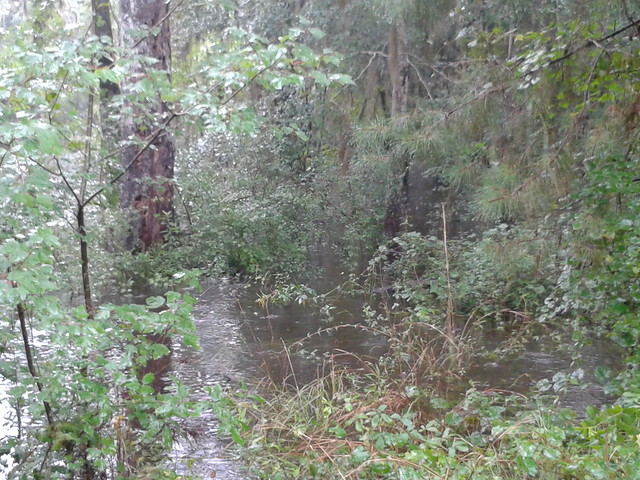 This is the first time scientists have tested for so many chemicals in a whole region’s waters or considered the impact of agricultural runoff on fish, frogs, bugs and algae at this scale. The study is costing the USGS $6 million and the EPA $570,000.

“These aren’t the kinds of studies that are done routinely, because they are pretty difficult to do,” says USGS biologist Diana Papoulias. “But we know that some of these chemicals that we’re finding in the runoff from the ag fields can affect [aquatic] reproduction and egg production. Whether they are at the concentrations that can do that or not we don’t know yet.”

Some tests being conducted can measure even the tiniest amounts of mercury, livestock hormones and pesticides, including the weed killer glyphosate better known by its trade name, Roundup.

There’s more in the GPB story, including this: 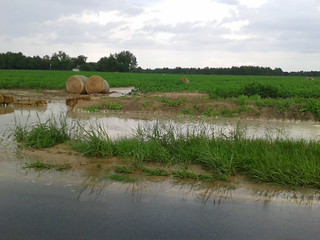 “There’s the direct impact on the aquatic ecosystem,” [Bob] Lerch [a USDA soil scientist] says. “And then there’s the downstream impacts on say, drinking water, or a reservoir, or a recreational [body of water].”

Agricultural runoff flows into the lakes and rivers that hundreds of towns draw their water from.

That cotton field and many others are upstream from Lowndes County and all the Florida counties on the Withlacoochee River and from where it joins the Suwannee River to the Gulf. Watershed contamination isn’t just about sewer spills or wastewater treatment plant overflows. 90+ percent of cotton, corn, soybeans, and peanuts in Georgia are grown with massive application of pesticides. And some of that runs off into our streams and rivers, and some sinks down into the aquifer we use for drinking water. How much? It’s not clear anybody knows. Maybe EPA should measure here next….