Yet more documentation on why gouging a pipeline under the Withlacoochee River, or through this Valdosta Limesink area anywhere, would be a bad idea:

In most watersheds (river basins) in Florida the interactions between ground water and surface water typically result in a single dynamic flow system. This direct hydraulic linkage results from numerous karst features (such as sinkholes, conduit systems in the underlying limestone, and springs) that facilitate the exchange of water between the surface and subsurface (fig. 1). Unique problems can arise in protecting water quality in karst areas because of the direct and rapid transport of recharge through conduits to the subsurface and through resurgence by springs. In some areas, recharge from unknown drainage pathways to areas of discharge may contribute to chemical and biological contamination of water supplies. Such contamination in karst areas has been documented by many studies.

Yes, it says Florida, but the geology doesn’t stop at the state line, as USGS spelled out in a 1999 study of the Withlacoochee River. It works like this in Georgia, too:

Drilling through that kind of geology could easily provoke a frac-out and collapse into the Florida Aquifer.

Here’s an interesting example of obvious groundwater interaction of the Alapaha River and a nearby well: 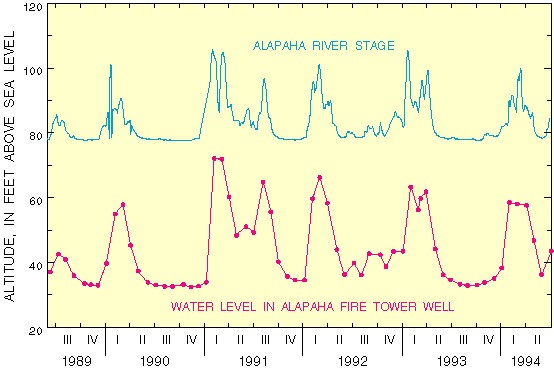 Elsewhere USGS has spelled out that groundwater depletion can lower well levels as far north as Cook County, as well as producing sinkholes.

Source of the illustrations used in this post: USGS FS-080-96, 1996, The Suwannee River Basin Pilot Study: Issues for Watershed Management in Florida,

The vast amount of information that has been gathered on ground-water and surface-water systems in the Suwannee River basin provides an extensive data base from which water-resource managers can begin to understand the importance of the hydraulic and hydrochemical linkage between ground water and surface water in the basin.

You can support the work of WWALS by becoming a member or donating.