Live Oak, FL, October 5, 2017 — Sabal Trail, operating without a permit, is at risk from a new sinkhole within 60 feet of its 36-inch diameter, high-pressure, fracked methane pipe under Suwannee River State Park (SRSP), between the Suwannee River and the drill site in Hamilton County. Such sinkholes are among the geological risks WWALS warned about that have happened in the fragile karst limestone containing our drinking water in the Floridan Aquifer. We were assured in October 2015 by Sabal Trail and the Florida Department of Environmental Protection (FDEP) that sinkholes and frac-outs would not happen or would be detected and fixed. They keep happening, and Sabal Trail has done nothing about this one. Sabal Trail should not even be continuing operations after the DC Circuit Court vacated its permit six weeks ago.

“Well, any work within, or could have adverse effects on OFW, is considered.In this case, we determine that there would be no impacts to the OFW.”

“Email to Ms. Prather’s address now comes back with an error message, while the rest of us are left dealing with this 500-mile-long IED. Why should any county, city, or citizen have to deal with this destructive and hazardous pipeline after even Florida Power and Light (FPL), whose customers are stuck paying for this $3 billion boondoggle, admitted in its 2016 Ten-Year Plan that Florida needs no new electricity until 2024 at the earliest, and last year more new U.S. electricity came from solar power than any other source, and the solar industry already employs more people in electricity generation than coal, oil, and gas combined?”

Sabal Trail has caused numerous sinkholes at or near its drill sites, and at least two in public roads in Florida, plus a frac-out of drilling mud from its pilot hole up into the Withlacoochee River between Quitman and Valdosta, Georgia, in the same geology that FDEP assured us about regarding the Suwannee River. Plus Sabal Trail’s repeated leaks of hazardous odorant at its Dunnellon Compressor Station site in Marion County, Florida, are still not resolved. Appeals to the Florida and federal agencies that permitted Sabal Trail and to federal agencies that are supposed to handle safety (PHMSA for pipelines and OSHA for workers) have gotten no action (see https://wwals.net/blog/?p=36562). Marion County Fire Rescue has been left to deal with repeated reports of a natural gas smell from citizens miles away from the site, even though Marion County passed a resolution saying it did not want this pipeline, as did three other Florida counties, six Georgia counties, and three Georgia cities (Albany, Moultrie, and Valdosta; see http://spectrabusters.org/contact/counties-and-cities/resolutions/).

This new sinkhole is in one of those uplands under which Sabal Trail drilled to go beneath the Suwannee River. You can see in this picture that the sinkhole continues underground, towards where I am standing in the first picture, which is south towards the pipeline.

Sinkhole continues to the south, towards the Sabal Trail pipeline. Photo: Chris Mericle.

After WWALS member Christopher J. Mericle, who is also the Chair of the North Florida Working Group of the Suwannee-St. Johns Group, Sierra Club Florida, took these pictures on Monday, October 3, 2017, he and I paced off sixty feet from the sinkhole to the pipeline path.

Chris Mericle has led several groups of elected officials through this area of SRSP in the past few years, for example Ted Yoho, Florida member of Congress for District 3, on May 15, 2016, with other elected officials and their staff, in a joint effort with WWALS, Sierra Club, and numerous other groups (see https://wwals.net/blog/?p=20285). 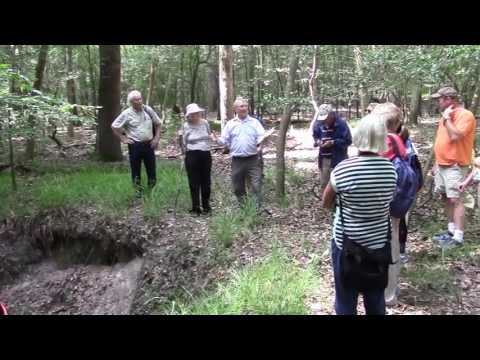 “I live near there in Hamilton County. I have been through the pipeline’s route through SRSP more than once this year, and I have not seen this sinkhole before.”

“The orders under review are vacated and remanded to FERC for the preparation of an environmental impact statement that is consistent with this opinion.”

In response, on September 27, 2017, FERC posted a laughably inadequate five-page draft Supplemental Environmental Impact Statement (SEIS), with no public hearings and a comment period only until November 20, 2017 (see https://elibrary.ferc.gov/idmws/file_list.asp?document_id=14605162).

“New York State already used the court decision vacating Sabal Trail’s FERC permit as a precedent to deny a permit for another pipeline (see https://wwals.net/blog/?p=36816). Yet Sabal Trail continues to operate with still more sinkholes and odorant leaks. FERC should shut it down, at the very least pending a real SEIS process, including comparisons with other energy sources, a comparison no pipeline can win against solar power. If FERC won’t do it, the court can still issue a mandate and make it so. Then maybe FPL and Florida would stop wasting customer and taxpayer dollars on 20th-century pipeline projects while solar power is ready right now for the Sunshine State (see https://wwals.net/blog/issues/solar/).”

Founded in June 2012, WWALS has supported solar power and has opposed the Sabal Trail fracked methane pipeline since 2013. WWALS advocates for conservation and stewardship of the Withlacoochee, Willacoochee, Alapaha, Little, and Suwannee River watersheds in south Georgia and north Florida through education, awareness, environmental monitoring, and citizen activities. John S. Quarterman is the Suwannee Riverkeeper®, which is a staff position and a project of WWALS Watershed Coalition (WWALS) as the Member of the Waterkeeper® Alliance for the Suwannee River basin.